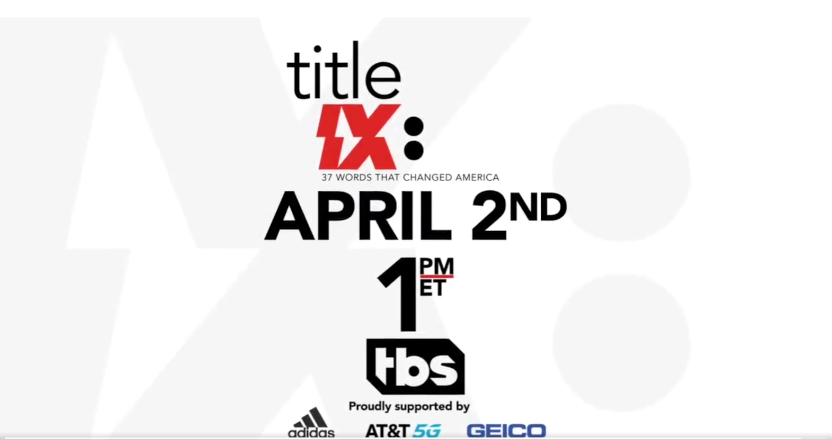 Saturday afternoon will see Turner Sports premiere a new documentary Title IX: 37 Words That Changed America, with that airing on TBS at 1 p.m. ET. That documentary explores the social and cultural impact of 1972’s Title IX legislation through the eyes of Turner NBA and NCAA analyst Candace Parker, who is an executive producer on the project ( a collaboration between her Baby Hair Productions company, Scout Productions, and Turner Sports). In a media call this week, Parker talked about how she pitched this project to Turner, how it’s the first project for her company, and why she cares about this topic.

“This is a passion project,” Parker said. “I remember back when I was in eighth grade and I did a paper on Title IX, and ever since then, it’s been of interest to me. And going to the University of Tennessee and literally playing for a pioneer of Title IX [legendary coach Pat Summitt], I got my fair share of lessons from it. And the biggest thing I got from it is the opportunity.”

Parker said she’s personally benefitted from the doors Title IX has opened in women’s sports, but she wants to recognize those who missed out in the pre-Title IX and early Title IX eras.

“My mom went to school from 1972-76, and they didn’t have Title IX [fully implemented], they didn’t have basketball, and she wanted to play, and I feel like there was an entire generation, and generations before that, that lost out on opportunities. Title IX isn’t just about sports, it’s about opening the doors for opportunities for a number of people. And I think that’s the tone in which we’re telling the story. And the people at Scout [Productions] and Turner, and our director, have done a phenomenal job of bringing this project to life.”

Here’s a preview clip for the documentary:

While Parker has been a Turner analyst since 2018, a documentary project like this is new for her. She said it was a different experience from providing studio analysis, particularly with the ability to go back and edit.

“I analyzed this more, I would say. I think as an analyst with basketball, it’s reaction. Obviously [there’s] reflection in terms of what you’ve done, being able to put it in a player’s perspective, being able to put yourself in that player’s shoes. But this documentary was one of those things where I kind of overanalyzed it. This is almost like an art work; when you’re live on air, there’s no erasing it, you say what you say and that’s where it is, but with a documentary, you can go back and erase and edit and take out and add, things like that. So I would say that’s the difference, trying not to fall into paralysis by analysis. Definitely on your first project, you want to get it right.”

Parker said a particular highlight for her was the participation of tennis star, women’s sports legend, and gender equality advocate Billie Jean King.

“I grew up a history buff, and not just in civil rights and World War II and things like that, we would go to museums all around the country, but in women in sports and the history of sports.  I have VHS tapes, and my daughter goes into my room and is like ‘Are these cassettes?’ and I’m like ‘No, they’re VHS tapes,’ of Dr. J, and Billie Jean King, and Cheryl Miller. And I’m so grateful for my parents surrounding me with so much history and culture. So to have Billie Jean King in this documentary, the 10-year-old girl that read about her in history books and did a biography project on her, I think it’s just so special. And I’m just so grateful that she has continued to open up doors for all of us, and has made that her mission.”

Title IX improved college sports opportunities for women in a number of ways, but there are still plenty of areas where women’s college sports still don’t receive fair treatment, as per a gender equity review the NCAA commissioned last year (in the wake of waves of criticism over one particular example of inequality, Oregon player Sedona Prince’s video of the primitive ‘weight room” the women were offered). Parker said she thought that moment, and that review, helped illustrate the inequalities female athletes and women in general long knew about to a wider audience.

“I think there was a pivotal moment that all of us saw last year in the bubble when Sedona shared with everyone the weight room. And there was an unbelievable outpouring of resources. Everyone was shocked, but to be honest with you, I think women athletes and women in general weren’t shocked. This was a picture that painted what has been going on for a very long time.”

“And everybody has stories, from tight jerseys in middle school where we were undefeated and the boys got brand new jerseys. The list goes on. We’re providing charity for the cheerleaders for them to come and raise money, but they won’t cheer at our games, they cheer at the boys’ games. There are so many inequalities that exist, and I think every single person will be able to tell that story, or has.”

“But I think last year was that pivotal moment that we’ve seen so much in our history, where people are like ‘Okay, we actually have to do actionable items.’ And you’re seeing now with the NCAA Tournament, something as simple as ‘March Madness,’ now women can use that. That’s unbelievable. It’s 2022. But things are changing. But it doesn’t take away that we still have so much farther to go.”

TBS will follow this documentary with a special edition of their The Arena sports and sports-adjacent discussion show, hosted by Cari Champion live from the Orpheum Theater in New Orleans. That show will see   Parker, Dr. Kiki Barnes, Tyrann Mathieu and Master P discussing the documentary and the impact of Title IX with Champion. Parker said she’s thrilled to get the opportunity to talk about this documentary and Title IX in that setting.

“I love The Arena, I love the fact that we’re able to talk about a variety of topics surrounding sports, but not sports. It’s going to be really, really cool to be able to share our experiences. Any time you can make something personal and make someone understand through your lens, it’s special. To be able to come straight off the documentary and talk about it and tell my perspective, and have others share theirs, I hope that people will tune in to hear the underlying message, or what progress we can make. I think it’s going to be really special for me to share what I was thinking, or what our point was in including certain things.”

This may be Parker’s first documentary, but she’s hopeful she’ll do more in the future. And she said she wants to continue to do documentaries that help provide a voice for those who aren’t often heard from.

“I would love to continue to do impactful projects and provide a voice for those whose voices aren’t heard as much as they need to be. That’s going to be what Baby Hair Productions stands for going into the future. We’re going to create good content and hopefully give a lesson, but also leave you feeling like you know that person. I think that’s why we went with having the Title IX story told through my eyes, so you can really see that if Title IX didn’t exist, I wouldn’t exist. And how many women before me came and aren’t able to sit in the rooms that they want to sit in because of not having opportunities? So that’s what we’re going to continue to try to do through these pieces.”