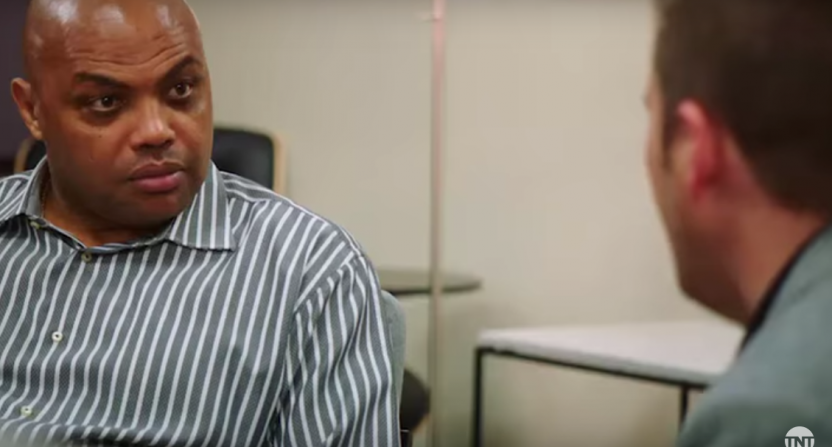 Charles Barkley’s American Race series of conversations on TNT is fast approaching, with the show set to air four hour-long episodes this Thursday and Friday (May 11 and 12). Turner released a whole raft of clips from the show in advance,  and one of the most interesting features Barkley in conversation with Richard Spencer, the white supremacist who recently spoke at Barkley’s alma mater of Auburn University and said “SEC football is sick. Black athletes are not part of white identity. I would ban football.” That particular subject doesn’t come up in the clip, but it provides a highly uncomfortable conversation in its own right, with Spencer relaying his views on why increased corporate and on-screen diversity is a bad thing, why he doesn’t want black people in his neighborhood, and why he thinks racial divides can’t be crossed:

Here are Spencer’s quotes from that clip:

“We’re living at a time at which white people are losing social dominance day by day.”

“We do dominate the world to an extent. Look at the boards of most corporations, tons of white people and Jews, yes. But every day we hear, ‘Oh, isn’t this great that there’s more diversity in this corporation? We need more people of color in films and movies, isn’t this wonderful?’ What is the trajectory? Where is the arrow pointing? The arrow is pointing away from white power. In my lifetime, what’s going to probably happen is that I’m going to become a minority within the United States. But what do I want for my great-grandchildren? I do want them to live in a white society, a European empire.”

“I think the country is fragmenting because at the end of the day, racial differences cannot fundamentally be breached.”

It’s hard to tell just from that how this is going to pan out in the full episode. To Barkley’s credit, he asks Spencer some good questions and gets him to lay out just why he feels this way. But is it really worth giving someone like Spencer this kind of platform, even if his assertions are questioned? It seems clear Spencer isn’t changing his tune much despite the backlash to his views, so it’s worth wondering what the value of spreading his views to the world is. We’ll see how this is presented within the wider context of the show, and where the conversation goes beyond the parts we saw. But there are definitely questions to be asked about if it’s worth giving Spencer yet more exposure, and if Barkley’s the best person to grill him.