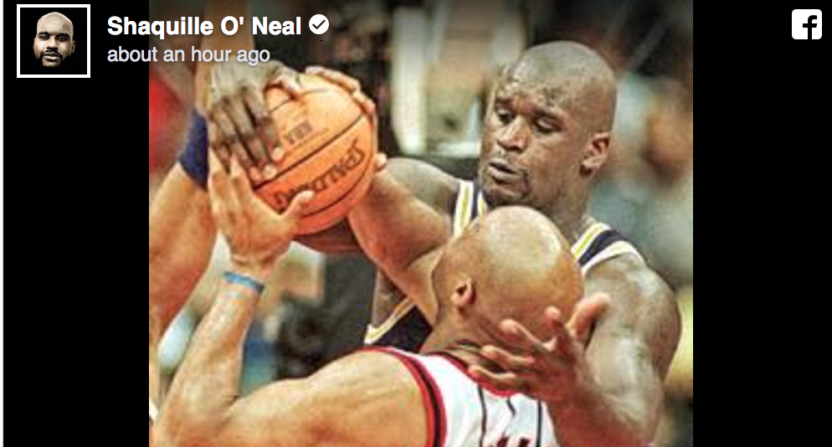 For a while now, Inside the NBA colleagues Shaquille O’Neal and Charles Barkley have been bickering on air in a way that seems to be part schtick and part actual acrimony.

After a few incidents over the course of the season, the apparent feud really blew up Tuesday night, when Shaq jabbed at Barkley for never having won a ring, Barkley said Shaq road his teammates coattails, Shaq called Barkley a “bum,” and Barkley alluded to Shaq’s “fat ass.”

On Thursday, Shaq ratcheted up the beef by posting on Facebook a photo of him seemingly out-muscling Barkley, with the caption, “Back when I used to DOMINATE on bum ass Chuck #throwbackthursdays.”

If Shaq and Barkley are just messing around, they sure are selling it well.

The thing is, whether or not these two are actually mad at each other, their fighting has made for really fun TV. Some people resent Inside the NBA for choosing personality over analysis, especially when the show features reality-show drama like this. But those kinds of antics are exactly what differentiates the TNT show from every other sports studio show on TV.

If you’re tuning into Inside the NBA looking for thoughtful basketball analysis, you’re in the wrong place. Inside the NBA is where people who happened to once play basketball banter and bicker about whatever comes to mind, sometimes interjecting basketball commentary that is as likely to be absurd as insightful.

The show works because it’s unabashedly silly and because it doesn’t take itself too seriously. Does this Barkley-Shaq discord distract them from talking about basketball? Sure. But Inside the NBA isn’t really about basketball anyway. And hearing two Hall of Famers dis each other on live TV (while Ernie Johnson ignores them and picks at a food spread) is awfully entertaining.

Now hopefully they don’t kill each other.