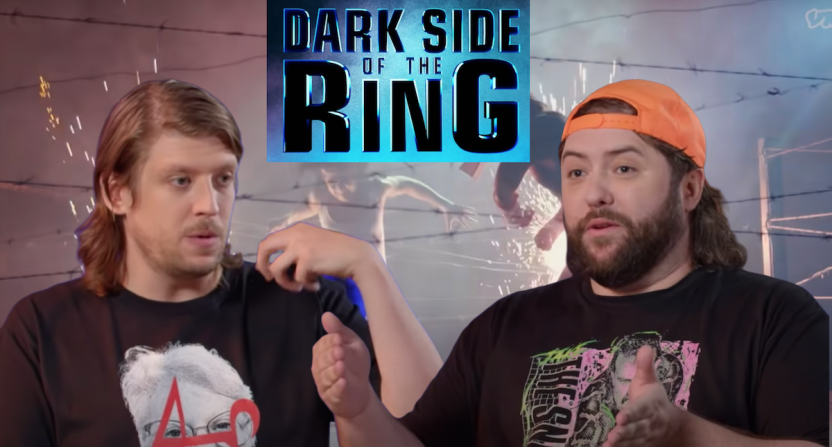 VICE TV’s Dark Side of the Ring returns with the second half of Season 3 — or Season 3B, as producers are calling it — on Thursday, Sept. 16, finishing off an ambitious, “mega” 14-episode slate for the professional wrestling docuseries.

Stories covered in the upcoming seven shows include 2002’s infamous “Plane Ride From Hell” and the 1994 WWE steroid trials. But Season 3B is also shining a spotlight on performers less known to wrestling fans, such as Chris Kanyon, Johnny K9, and Luna Vachon, in addition to outlaw wrestling leagues like FMW and XPW.

Bringing attention to those wrestlers and their stories was something Dark Side co-creators and executive producers Evan Husney and Jason Eisener aimed for in the show’s third season.

Related: “Every story is a puzzle to figure out”: Dark Side of the Ring’s Evan Husney, Jason Eisener discuss Season 3

“It’s one of my favorite things to do with this platform,” Husney told Awful Announcing via Zoom call. “Chris [Kanyon] is someone who pioneered and ushered in modern wrestling. He’s somebody that was doing these moves, and this transitionary style of wrestling that you see as much more ubiquitous today, back in the 90s. Johnny K9 may be our most deep cut we’ve ever done, a job wrestler from WWF and Smoky Mountain, who led this life of crime.

Three seasons in, the producers feel that the series and its brand have built up a trust with their fans. Viewers know that subjects chosen for certain episodes that seem obscure will be interesting and crazy.

“I think with our fanbase, they’ve seen the episodes in prior seasons,” said Eisener. “So even though we want every episode to stand on its own, there is a little bit of an elevation. We feel we’re educating the audience, so we don’t have to spend so much time maybe overexplaining something. They just understand it now.”

The passion that Eisener and Husney have shown for wrestling stories and the people involved hasn’t just been affirmed with the success of Dark Side, but with the emergence of scripted content portraying the characters and behind-the-scenes drama of this world, such as Starz’s series Heels and NBC’s Young Rock sitcom. That was the producers’ original vision for the series.

“At first, because we have a film background, we wanted to do narrative stories, like either movies or a television series, something scripted,” said Eisener.

“Seeing that there are more shows, it’s maybe validating us in a way, because we knew that there was an opportunity and a hunger for these stories, that there is a big audience that’s interested in the history, the behind-the-scenes of it. A lot of friends I know who were not wrestling fans, I said to them, ‘Just give my show a chance! It’s not just for wrestling fans’ and they get sucked into it because the human stories are captivating.”

Telling human stories with the show is a point Eisener and Husney emphasize repeatedly. It’s not just about the tragedy so many wrestlers and their loved ones have experienced. If Dark Side continues into future seasons, episodes might focus less on those grim elements.

“I think the ‘Dark Side of the Ring’ name, if we could go back in time three years, we never wanted the show to just be about the tragic end of wrestling,” Husney said. “We wanted it to be about the human stories of wrestling.

“So when we say there’s plenty of material, it means there’s plenty of human stories left to tell in the wrestling world. But also maybe we’ll expand our horizons a bit and kind of redefine areas we could go into for the show.”

Husney and Eisener’s work has also been validated among wrestling fandom with references often made to the show and its stories on AEW programming, now featured twice a week on TNT.

This was very sweet of @CMPunk. Linda is a hero and someone we could all take inspiration from. pic.twitter.com/a7Et2nh6LY

Linda Pillman, mother of the late Brian Pillman, figured prominently in the two-part episode that opened Season 3. She received a shout-out from CM Punk on the Sept. 8 episode of AEW Dynamite. Would that have happened, would fans have made that connection if not for her appearance on Dark Side?

“That, to us, is really just a major reason to do the show,” said Husney.

The breakout success of AEW, especially in recent weeks with CM Punk’s return and the now-infamous “No Rules” match between Nick Gage and Chris Jericho involving a pizza cutter, has not only benefited the show, according to Husney and Eisener, but the wrestling industry as a whole. AEW and the promotion’s founder, Tony Khan, have allowed performers to share their stories and concerns about issues like mental health, something that fits right in with Dark Side‘s storytelling and made the producers feel like fans again.

“I just get a sense that the vibe which we’re going for with our show,” said Eisener, “the stories that we tell, how we’ve opened up a platform for wrestlers to be honest about their feelings, about mental health, I just get a sense that AEW is on board with that kind of approach. They just seem to be very open in that way. I think that’s cool.”

For the finale of Season 3B, Dark Side takes on probably its most ambitious episode yet with the WWF steroid trials. Both the producers and VICE TV have big expectations for that episode, with a story that is also going to be covered in an upcoming dramatic series produced by WWE overlord Vince McMahon and Blumhouse Television.

Husney and Eisener weren’t aware of the Blumhouse project, already far along into production on Season 3 when that news broke. But they get to tell the steroids trial story first and are confident their episode will feature characters that the dramatic series didn’t consider.

“I think that it’s a very exciting story for us to tell and we’ll do it first,” said Husney. “It’s an honor to have Jerry McDevitt — a major player, WWE’s longtime attorney — a major player in that story telling his side of the story in our show. I think that’s really cool.

“But I think the expectations are high. I hope we nailed it. It’s a huge story with a lot of different players. It’s definitely one that I think deserves to be the finale of this monumental season.”

Dark Side of the Ring, Season 3B, premieres Thursday, Sept. 15 with “The Plane Ride From Hell” at 9 p.m. ET on VICE TV. The previous seasons are available to stream on Hulu and for rental on Amazon Prime and Apple TV/iTunes.