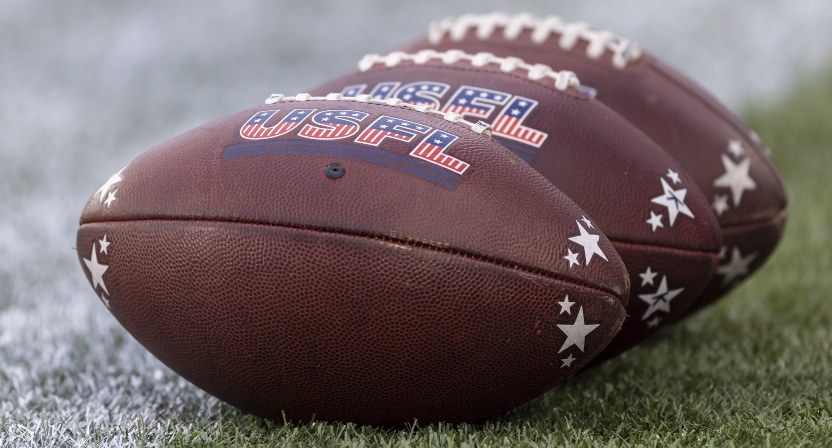 The USFL’s first season drew positive comments from executives at Fox (which owns and broadcasts the league) and NBC (which only broadcasts it), but there have still been significant questions about the league’s future. The league saw major attendance issues, which came in part from playing all its regular-season games in one city. And while the executives were publicly fine with the TV ratings, those ratings certainly weren’t mind-bogglingly good.

And while another USFL season is in the works, it’s unclear how many cities will host, if Fox will get the outside investment they’ve targeted, and how the league will do in the face of competition from the XFL. One piece of the USFL future puzzle was cleared up this week, though, with the announcement that Fox had settled the lawsuit they were facing from original USFL owners and executives over trademarks. Here’s more on that from Reuters’ Blake Brittain:

Fox Sports Inc has settled a lawsuit brought by team owners and executives from the 1980s-era United States Football League over Fox’s name and branding for its new league of the same name.

The Real USFL LLC asked the court to dismiss its case against Fox with prejudice on Monday, which means it cannot be refiled. The company’s attorneys Nicholas Matich of McKool Smith and Alex Brown of the Lanier Law Firm said Tuesday that the parties’ confidential agreement “protects the legacy of the original league and helps Fox carry the torch going forward.”

Fox attorney David Bernstein of Debevoise & Plimpton said the network has an exclusive license to USFL trademarks and “looks forward to the second season of USFL spring football next year.”

A settlement seems like a reasonable outcome here, as the plaintiff company initially petitioned for an injunction to block Fox from using these trademarks altogether, but were denied by an April ruling from U.S. district judge John Walter. Walter’s ruling there was favorable to the plaintiff on many points (including concluding that “Plaintiff has demonstrated a protectable ownership interest in
both the League and Team Marks,”  “demonstrated a likelihood of confusion” and “demonstrated likelihood of success on the merits of its Trademark Infringement claim”). But it allowed Fox to proceed with the league and with use of these trademarks, concluding that “any damage suffered by Plaintiff can be addressed by monetary compensation.” So this was going to end with dollars one way or the other, and now it’s done so without further legal wrangling.

It’s unclear how much Fox settled this lawsuit for. (It’s probably more than the $3 the NFL had to pay the old USFL in the 1980s antitrust case.) And this lawsuit and settlement probably wound up as an unexpected cost for the new league, as the Fox filings noted in Walter’s ruling indicate that they believed they had properly acquired the USFL marks. (The history here is quite complicated, but it basically boils down to Fox, through The Spring League that turned into the new USFL, buying rights to these marks from someone who had filed for them in 2011; the original ownership group argued that filing didn’t invalidate their trademark rights, and that’s what’s now being settled.) But settling this seems positive for the USFL’s future, and perhaps especially for their chances of attracting outside investment. That’s tough to do with a lawsuit hanging over a league’s head, and now at least that hurdle has been cleared. We’ll see where the USFL goes from here.

[Reuters; photo of USFL game balls in May from Vasha Hunt/USA Today Sports]