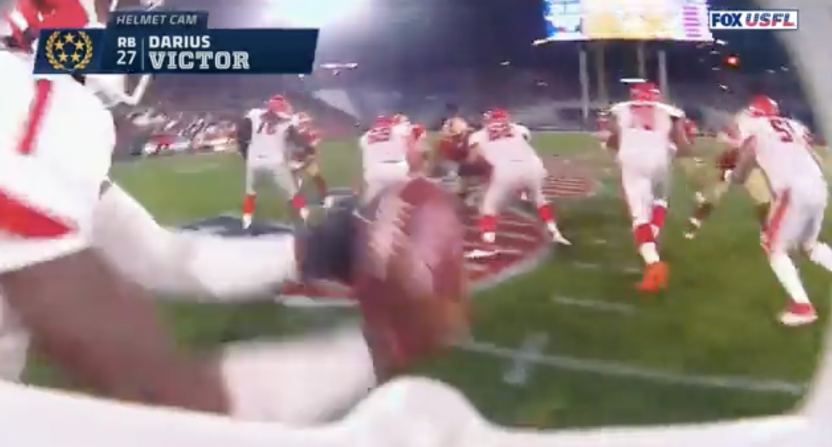 All due respect to the players and coaches who are taking part in the new-and-improved USFL’s inaugural weekend, but one of the most interesting aspects of these startup football leagues is often the introduction of technologies and unique production ideas that football audiences can enjoy and the NFL ultimately takes for themselves.

The original version of the XFL infamous introduced many football fans to the skycam and a broadcast that focuses on individual player personalities, both things the NFL ended up co-opting to a large degree.

The second XFL gave us some unique sideline access that harnessed the ability to tell stories within the game that didn’t seem possible before.

USFL 2.0 kicked off its first season on Saturday with a game between the New Jersey Generals and Birmingham Stallions. The gameplay was decent and the hard-fought battle was won in the final moments on a thrilling touchdown scramble. A very (much-needed) solid start to their season.

While fans and TV audiences get to know the teams, players, and coaches involved, the broadcast innovations are what’s going to make people take notice the most for now. And there was no aspect of the USFL broadcast that people noticed than the use of drone cameras during gameplay.

If you’re watching the USFL opening game, any thoughts? Thus far the drone shots seem to be getting the most attention. pic.twitter.com/bQVO3enGrG

Better than skycam for kickoffs? More of a novelty? pic.twitter.com/9ehNa2WBXW

The drone camera definitely brings a unique perspective to a game broadcast, though it really does feel like it’s only a matter of time before it interferes with a play (no disrespect to the drone operators). While the very up close and personal view gives audiences some very refreshing angles and ways to enjoy the football action, it was not without some gripes as well, including the noise they produced.

The one thing with the #USFL’s drones is the pirouetting is pretty disorienting. I’d like to see a high behind the QB angle from the drone and stay steady.

– Drone cam: Didn't like it. They already have a sky cam. Don't see the purpose of it.

– Coach audio: Like it in theory, but it's distracting for the entire game.

Super excited for the #USFL but we really gotta ditch the drone footage. I appreciate that it’s a new concept that hasn’t been used in football in this capacity, but it’s making me sea sick lol and hopefully soon they can upgrade the camera equipment

While it has been done before, the usage of helmet cams also brought some unique perspectives to the game.

The USFL helmet cam is a wild ride. ??‍? pic.twitter.com/6MFAOBX9XG

And again, while there might be some value in seeing things like this during the game, it’s perhaps not what football audiences want to see too often. There were reactions on both sides to this innovation as well.

I LOVE that Fox is using the USFL as a way to experiment with new broadcast features. It’s like MLB testing new rules in the Minors https://t.co/WPuZI2D2No

This has been fun to watch. https://t.co/JZ7rcvxeaU

This is ESPN NFL 2K5 come to life. https://t.co/lCmieMyCJ3

Between the drone and helmet cam shots, the USFL has been very interesting visually. https://t.co/sR2g8Cc7sN

Whatever you feel about these attempts to provide new and interesting broadcasting options for football games, much like the league itself, it’s an experiment happening in real-time. Like with the previous spring football leagues, we’re likely to see them tweak their broadcasts as they go based on what’s working, what’s too much, and what’s not enough.

Case in point, by Sunday, we were already seeing some different usages of both the drone and helmet cam and how they can help tell the story of a single play.

We’re gonna guess that the USFL is paying very close attention to social media this weekend to see what kind of reactions they’re getting for these broadcasting options, so keep the opinions coming.