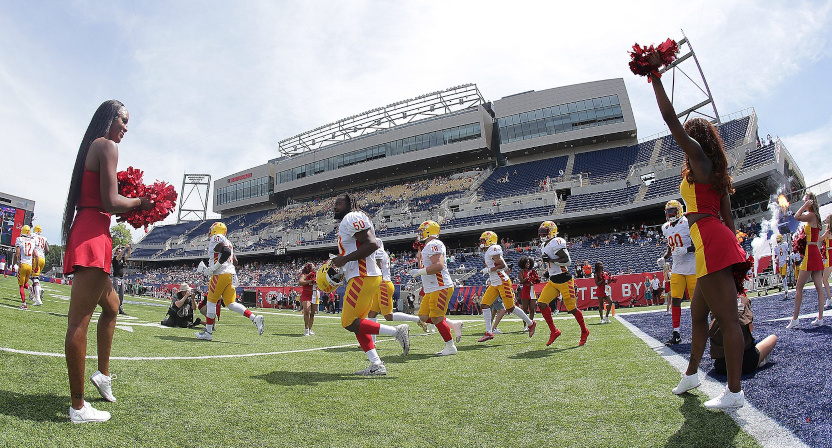 It’s not surprising that Fox Sports CEO and executive producer Eric Shanks has now confirmed that the Fox-owned USFL will return for a second season, considering how positive Shanks (also the chair of the USFL board) was last week about the league’s ratings performance in year one and how Fox Corp. CEO Lachlan Murdoch has talked about their long-term plans for the league. But there has been a notable change to what’s ahead for the league, and that involves not actually going to all the teams’ “home markets” in year two.

While the USFL has eight teams at the moment, the city/state names associated with those teams at the moment are mostly just for logos and color schemes. All of the league’s regular season games were played in Birmingham, Alabama this year, with the playoff games (including next Sunday’s championship game) played in Canton, Ohio. But the league has tried to sell these teams as having some connections to the names on their jerseys, tapping into the nostalgia for the old USFL names and teams, and has played up the idea of eventually playing in those markets. Murdoch described their teams as “local” and talked about plans to eventually sell teams to “local owners” (in five to seven years) back in May, and an OurSportsCentral piece from Fran Stuchbury last November around the team names included “in the future, the USFL expects teams will play in their own markets.”  And doing so in year two was even described as “the goal” in a piece Tony Paul of The Detroit News wrote back in February based on an interview with USFL president of football operations Brian Woods.

“We looked at a lot of different models of how we wanted to operate our league in the inaugural season,” Brian Woods, president of football operations for the USFL, said in a recent interview with The News. “The majority of major sports properties are going to start with teams all over the U.S. When we met behind closed doors, we decided the best format, the best structure that would position us best for our success in the long term, the idea was raised to have all these teams in one market initially. One, it would be efficient. Two, it could help in eliminating the need for costly travel, and the multiple venues.”

“I think, really, in Year 1, it’s always about walking before we run. And the structure we’ve established, having the hub, I really feel like it positions this league for the best chance of success.”

“What we found after we made our initial announcement and as we continue to make announcements, there is a fan base out there. Fans are pulling out their old memorabilia, whether it be game programs or ticket stubs. …These teams were once in those markets. There’s certainly a connection. …(It’s like) we’re starting on second base. This is a known brand.”

…Woods said the goal would be for the teams to relocate to their actual markets for a second season, in 2023, but that’s not set in stone. …The hub could remain, but if it doesn’t, Woods said there have been preliminary discussions about specific venues in Metro Detroit.

It was smart of Woods and others with the USFL to hedge a bit on whether they’d actually hit those local markets in year two, as it’s now clear that they won’t make it to most of them by that timeframe. Instead, they’re opting for two to four hub cities. Here’s more on that from John Ourand of Sports Business Journal:

Shanks, who also serves as Chair of the USFL BOD, said that the league will continue to have its league office in Birmingham, where it has played all of its games this season. But the USFL’s eight teams will play out of between two and four markets next season, meaning each market will house multiple teams. Eventually, the plan is for all the teams to be in their home markets. “We’re talking to those cities now in terms of how many we’re going to be in locally,” Shanks said during a telephone interview over the weekend.

The league, which plays its inaugural championship game this weekend, will not expand the number of teams next season beyond eight, but it expects to add more teams by 2024. “We’ve always had an expansion plan that could potentially come into play in year three and beyond,” Shanks said. “Next year, it will still be eight teams, but they will play in multiple cities, so we’ll get more home markets involved.” The USFL will keep roughly the same schedule next season: starting just after the Masters and concluding July 4 weekend. “We have a multi-year plan to build this football business,” Shanks said. “If anything, the success of season one makes me even more excited than we were before going into Season 2 and beyond.”

Going from one city to two to four cities certainly will get more home markets involved, and that may help with one of the league’s biggest issues to date: in-person attendance at games.  Playing all the regular season games in Birmingham in season one meant that three out of every four games (every game not involving the hometown Stallions) had no true home team, which is a tough sell for fans. And some of those games had next to no one in the stands. Even the Stallions’ attendance wasn’t great; they got around 17,500 people out (to Protective Stadium, which has a capacity of 47,100) for the league opener, but their numbers dropped from there. And the neutral site of Canton for the playoffs didn’t seem to work out too well for attendance either, as the top image of very-empty stands near kickoff of the “New Jersey” – “Philadelphia” semifinal game Saturday illustrates.

And low attendance hurts in multiple ways. For one, that lessens gate revenue. For two, it lessens concession revenue. And for three, it lessens the appeal of the game on TV. It’s notable that last week saw NBC Sports executive Jon Miller cite attendance as his primary concern with the league going forward, especially considering that NBC (unlike Fox) is just a broadcaster, not a league owner, so the only impact for them is from what it looks and sounds like on TV. Here’s what Miller told SBJ’s Ben Fischer on that front:

However, Miller did make on exception to his rave reviews: Attendance. With a single location to hold down costs, games not including the Birmingham Stallions had almost no fans, and even Stallions games were sparsely attended. This was the plan for the low-cost, low-frills startup all along, but we all know how bad empty seats can be for TV.

“The attendance issue was something we knew was likely to happen because of the one location. … We’re working with (Fox) to address that for next year,” Miller said.

Of course, as Fischer notes there, that was the one negative thing Miller had to say about the league amidst a series of positive comments. And NBC does sound like they want to be involved again, and going to two to four cities rather than just one should help attendance at least somewhat, as it will increase the numbers of actual home teams. (In fact, a league hosted in four cities could feature a true home team for each game, but that would mean that teams either play all home games or all road games, an approach creating balance and scheduling problems.) But going to two to four cities means that four to six teams still won’t have a true local market with home games, and it also means that the host cities will get more games, making individual games less of an event (and boosting the number of games those venues have to try to attract people to come to). It certainly makes some sense to do this limited expansion from a sense of keeping league costs down, but it definitely limits the attendance gains we might see in year two.

It’s also notable that year two will feature competition from another spring league, the third incarnation of the XFL. The XFL’s season will begin earlier (it’s set for a February 18 start, while the USFL is again looking to run April to late June or early July), but there will be at least some overlap. And all reports to date are that the XFL will again (as they did in their second incarnation in 2020) play in teams’ home markets.

The XFL teams are not fully confirmed yet, but the eight reported teams to date only directly overlap with the USFL in one market, Houston. However, there are two other XFL teams slated for Texas (in Dallas and San Antonio), and there’s one slated for Orlando: the USFL also has a Florida-named team with the Tampa Bay Bandits. And fans in markets that don’t have a specific USFL team but do have an XFL one may wind up shifting allegiances to that league. The XFL could wind up drawing off some USFL fans for a variety of reasons, but one may well be “having actual local teams,” especially now it’s clear the USFL isn’t going to do that for all of its teams in 2023.