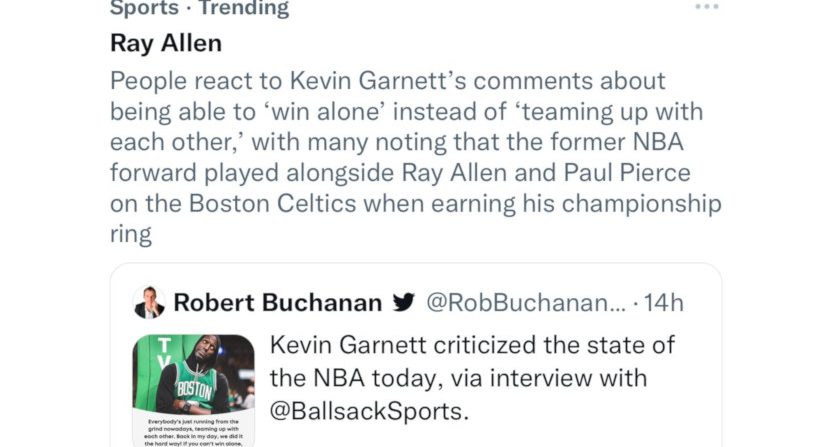 The spread of fake sports quotes and reports on Twitter has been a problem since the service’s inception. The first-level deception we often see here is impersonating an insider (or an announcer, or a team, or a league or organization) by using a slightly-changed username and the profile picture of the real account, then tweeting fake news or quotes and seeing who falls for it. The second-level deception is creating an account that looks like a reputable local or national source, then tweeting out fake information and watching who picks it up. But the issue we’re currently seeing is a variation on that second level, one where reports from a parody account (where the name alone should indicate that) that keep being passed around as real.

One big one there recently is “Ballsack Sports.” That Twitter account has been the subject of discussion from Sixers’ GM Daryl Morey (as an example of reports not to believe), and they previously fooled Outkick/Fox News with fake quotes from Josh Smith. They’ve also gotten some other people to bite on other fake quotes. And on Wednesday, we saw an interesting new twist on this: the @BallsackSports account didn’t start this one themselves, but another account, @RobBuchananFox, created a stir with a quote attributed to @BallsackSports, which @BallsackSports later retweeted (something they’ve done before, too).

Kevin Garnett criticized the state of the NBA today, via interview with @BallsackSports. pic.twitter.com/OU5ZdPgitC

A number of verified accounts started engaging with that quote as legitimate. And if it had been legitimate, there are obvious reasons to mock it; after all, Garnett of course teamed up with Ray Allen and Paul Pierce in Boston. But Garnett didn’t actually say this. @RobBuchananFox fooled plenty of people into thinking he did, though, and that led to Twitter even presenting those as real quotes in their summary of why Ray Allen was trending. But, after Sopan Deb of The New York Times pointed that out, Twitter changed that description to reflect that the Durant quotes here weren’t real:

Let’s get into some more on the @RobBuchananFox account noted there. That account’s bio earlier Wednesday was “Senior Journalist and NBA Insider for Ballsack Sports”; it’s unclear what it was when this was first tweeted. It’s now added “(Parody Account)” to the end of that, which is in line with Twitter rules for parody accounts. But even before that was there, this wasn’t a source to believe. And yet, it was the first tweet featured under that Ray Allen trend.

Yes, the “Buchanan” account looked like countless similar accounts from local Fox anchors, but it didn’t claim an affiliation with a particular station (at least not at the time we saw it), and a quick Google Lens search of that profile picture reveals it’s actually of Oxera consultant Leon Fields. And this particular account had very few followers; even after all the buzz around this, it still was below 1,500 followers as of 6:30 p.m. Eastern Wednesday. But a lot of verified accounts jumped on this after the Buchanan tweet, and that led to that Twitter trend (although it wasn’t a huge trend; it wasn’t in the U.S. top 30 when we checked Wednesday afternoon), and to even the Twitter trend writeup claiming it as real (until after Deb’s tweet).

There have been plenty of cases of people tweeting (or even commenting on air) about things from accounts that seem like clear parodies, from the various accounts of “Barry McCockiner” to people getting fooled by The Onion or similar parody sites. “Ballsack Sports,” and “RobBuchananFox,” are just the latest examples of that. But it is interesting to see how many people will still engage with or pass on a quote attributed to “Ballsack Sports” (even if they give “Buchanan” the credit for this one) as sincere. And in this particular case, even Twitter’s trending writeups treated it that way at first.