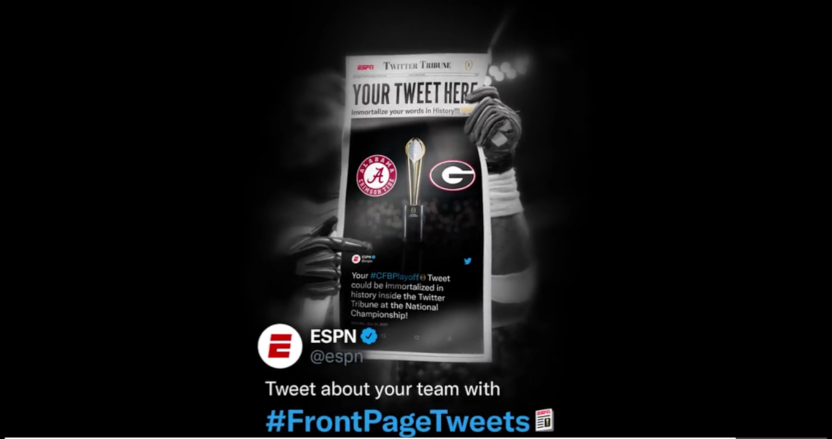 College football saw a lot of activity for Twitter this season, with the service seeing an average of 741,000 tweets on Saturdays, a 444 percent increase compared to the average weekday. In a Football Conversation Report Twitter published in November focusing on August and September 2021 versus 2020, they also saw 35 percent year-over-year growth in unique authors of college football tweets and 48 percent growth in unique tweets about college football (both numbers U.S.-only). And college football also drove some success for their audio Spaces recently, with media and fans seeing big numbers there around coaching searches and moves and some administrators even jumping into fans’ Spaces to provide their perspective.

Now, Twitter is teaming up with ESPN for a “Twitter Tribune” newspaper that will be handed out to fans in the stands at the conclusion of Monday’s College Football Playoff championship game between Georgia and Alabama. The newspaper will feature submitted tweets from fans celebrating their team and its season. Here’s how ESPN put out the call for tweets Saturday:

What would you say to your team if they won the championship?

Tweet us using #FrontPageTweets and have the chance to be featured in our newspaper dedicated to the fans! ✍️ @CFBPlayoff pic.twitter.com/HPyzhlXWtS

The newspaper here will feature a national championship tweet from @ESPN on the front along with a graphic, then the inside folds will feature  selected fan tweets submitted to ESPN with this hashtag. And copies of the newspaper will be shipped to fans who had their tweets selected for it.

This is an interesting idea on a few fronts. Local newspapers often have special fronts ready to go at the end of a championship so players can pose with that during on-field ceremonies, so this is building off that. It’s also notable to see the idea extended a bit, with a plan of distributing this to fans in the stands and to those who had their tweets selected. And it’s notable that ESPN and Twitter are teaming up in this kind of fashion. And, maybe the biggest part of this is all the Twitter attention it’s getting in advance with these fan submissions. That’s useful for Twitter in driving conversation on their service (and college football has been important to them there), and it’s useful for ESPN in building chatter about the championship game they’ll be broadcasting Monday. We’ll see how this “Twitter Tribune” plan goes, but it’s at the least a bit different, and there seems to be some logic to it for Twitter and ESPN in getting some more college football conversation going.