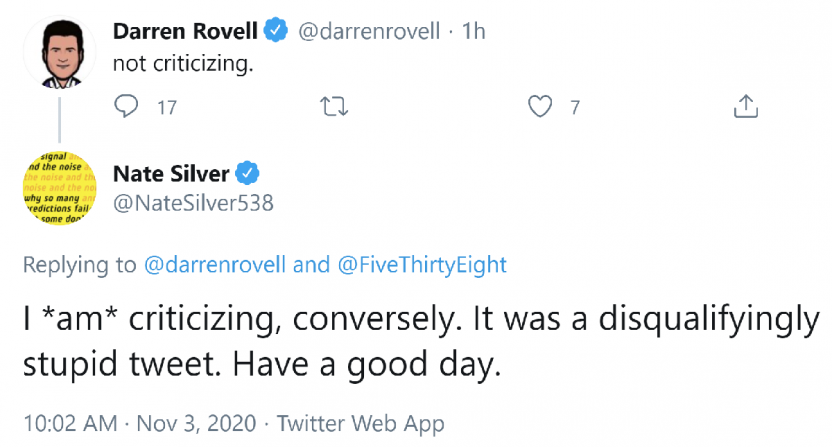 It’s Election Day in the United States, if you were somehow unaware of that fact until this very moment.

Like, say, Darren Rovell, who is never unwilling to risk looking foolish for the sake of engagement. (Or some free tires.) Darren today tweeted out the final Five Thirty Eight forecast for both the 2016 election and the 2020 election, and did so clumsily.

He obviously deleted the tweet, but not before Nate Silver came after him for how Rovell misrepresented what the model is actually supposed to do.

Darren, as someone who covers betting markets for a living, you have to be pretty fucking stupid to criticize a forecast than was very long on Trump relative to markets.

Rovell quickly apologized, but if he hoped that and deleting the tweet were going to be enough to defuse the situation, he was incorrect.

I *am* criticizing, conversely. It was a disqualifyingly stupid tweet. Have a good day.

It’s hard to really take sides here, to be honest. Yes, Rovell clearly misunderstanding the purpose of the 538 forecast, and doing so as someone who ostensibly should know better given his work covering betting markets, is not the best look. Plus, Darren has a history of stepping in it when it comes to election-season tweets.

i feel bad for our country. But this is tremendous content.

On the other hand, Silver always goes out of his way to defend his site’s forecast model, seeming at times to suggest that any possible result is built in and therefore no matter what happens it was correct. (That may be true, but if it is, what’s the point?) In the end, though, this Twitter feud probably had a clear winner, as Silver forced the tweet to be deleted and delivered by far the best burns.

But that was to be expected; our model, gave Nate Silver a 90 in 100 chance at victory over Rovell in a Twitter feud heading into Election Day, so the outcome wasn’t much of a surprise. Of course, had Rovell managed to counter effectively and pull in some of the many undecided voters who didn’t like either of the candidates here, he may have actually pulled off the 10 in 100 victory.

And in that case, our model would have also been right. After all, 10 in 100 is about the same odds that it’s raining in downtown Los Angeles.

And it does rain there.