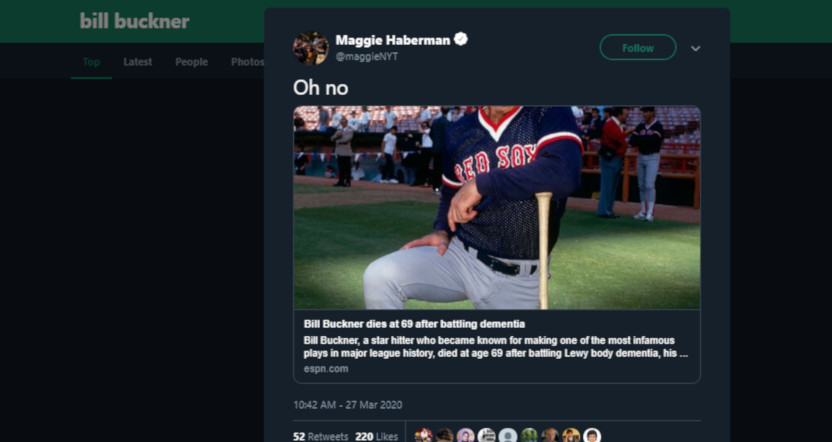 One of the celebrity deaths that drew a lot of discussion on Twitter Friday actually happened 10 months ago. Twitter blew up with a lot of people posting “RIP Bill Buckner,” but the curious thing there is that Buckner’s death (at age 69 after a battle with Lewy body dementia) actually happened last May. But it got a lot of discussion Friday as if it was new, and one key source there appears to be this “Oh no” tweet of an ESPN story (from May 27, 2019) from New York Times political reporter Maggie Haberman:

Haberman has 1.26 million followers on Twitter, so her tweet was seen by a lot of people, and it led to a whole lot of tweets acting as if Buckner’s death was new. However, it also led to a lot of people commenting that it wasn’t new:

A premier New York Times journalist just shared a nearly year-old article about the death of baseball player Bill Buckner as if it was breaking news. Ridiculously careless on the part of any journalist to do this, let alone one of the best known in the country. pic.twitter.com/iGUA0yeTLU

It has been 10 months since Bill Buckner died, but it appears Maggie Haberman only found now https://t.co/GXRPziWUHE

Oh no from last year. We are living in a permanent time warp. https://t.co/7WLIv2s0H3

It’s somewhat understandable why many people started tweeting about this as if it was new following Haberman’s tweet; she certainly appeared to present this as new news, and if people didn’t know or remember that Buckner had passed away last year, that would seem like notable news. And even a click-through to the story wouldn’t necessarily stop that without a detailed look at it; while it’s labeled as May 27, 2019, a quick glance could mistake that for today’s date of March 27, 2020.

What’s more curious is how this old story wound up on Haberman’s radar, and why she thought it was new at first. And we don’t have any answers there right now. But at any rate, this led to a lot of RIP tweets about Bill Buckner 10 months after his death.