As Twitter user @maplecocaine once said, “Each day on Twitter there is one main character. The goal is to never be it.” Fox 6 News’ Adam Hansen did not heed that advice.

Hansen, who works (for now) as a photojournalist for WITI-Fox6 in Milwaukee, Wisconsin, was attending Saturday’s game between the Brewers and Pirates. He had really good seats, too, in the second row along the third base line. However, he found himself distracted from the game by what was going on in front of him.

Sitting in the front row was a young boy who was, in Hansen’s words, “sitting on his phone watching YouTube videos with his earbuds in.” Hansen not only tweeted out his disdain for the kid’s life choices, noting that his presence was a “waste of a ticket,” but he included not only a photo of the kid on his phone but also the man (presumably his dad) sitting next to him. 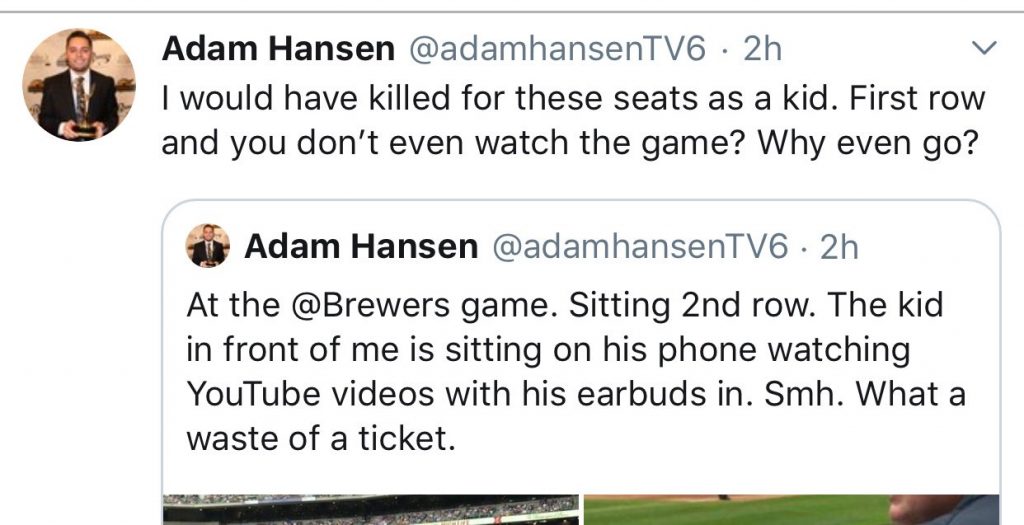 The idea here is that everyone is supposed to join Hansen in judging this kid for not paying close attention to the baseball game because…that’s a requirement apparently. Of course, that logic falls apart when you realize that it’s no one’s business what the kid does. Grown adults go to baseball games and barely pay attention all the time. Also, why are you taking pictures of kids you don’t know without their permission and posting them online?

The pushback started coming pretty quick for Hansen, who initially doubled down by saying he “would have killed for these seats as a kid” and pondered “why even go?” Again, these comments miss the critical point that it’s none of your business. Even so, as the feedback kept coming, Hansen kept pushing back. 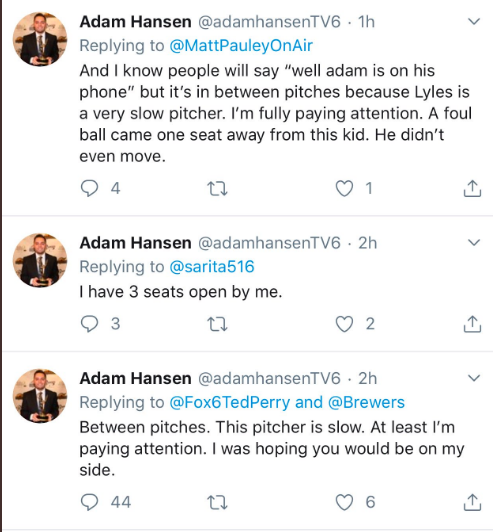 So you’re both on your phones at the game?

If this is where the story ended it would have been a learning opportunity (albeit one that still ends with a kid’s photo plastered all over Twitter without permission). Perhaps Hansen could have salvaged this and done some kind of photo op apology and the world would have moved on. However, when you become Twitter’s main character, the story never ends there. Because where there’s smoke, Twitter users assume there is fire and they go looking for it. In Hansen’s case, they found it in the form of what appear to be some pretty shitty tweets.

this guy’s a trip, @fox6now got a real gem here pic.twitter.com/Gcg87cvhd8

whew, @adamhansenTV6 has a lot of racist nonsense on his account!!!

At some point, sensing that things had gotten as bad as they seem to the rest of us, he set his account to private. No word yet on what’ll happen regarding his employment with Fox 6 News but judging by how many people tagged them in the tweets, they are certainly aware of the situation.

Until then, there are quite a few lessons to be learned here but chief among them is the most important lesson of all: Never tweet.