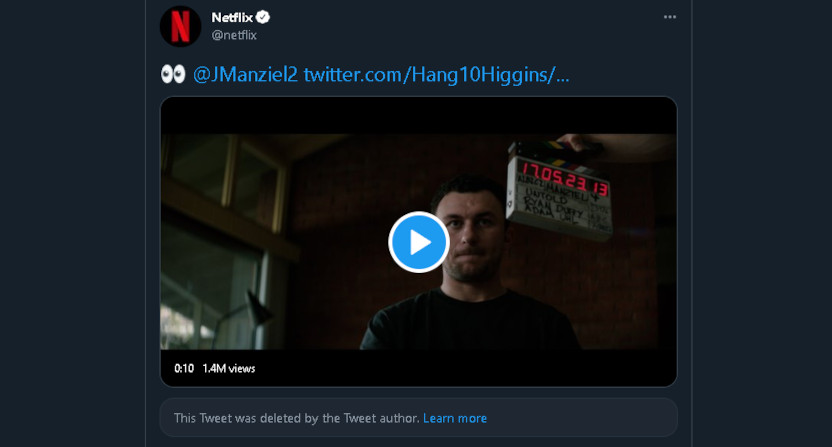 Netflix has made a lot of voyages into the sports documentary space recently, with two seasons of the Untold series, one season of Bad Sport, F1: Drive To Survive, upcoming golf and tennis shows,  Last Chance U (on football and basketball), and a lot more. They recently received a lot of buzz for two-part documentary Untold: The Girlfriend Who Didn’t Exist, on the Manti Te’o saga. And now it looks like they may have something further in the works on another prominent former college football player, Johnny Manziel. But the way that was announced was extremely strange, in a reply to a nine-days-old tweet from someone who speculated about the documentary, demanded $1,000 not to take his tweet down, then took down his tweet after not receiving that money.

On Aug. 24, after the release of the Te’o documentary, there was a notable tweet from Brendan P. Higgins at his  @Hang10Higgins account. That account has a bio of “EIC @G__S__C , athlete, writer,” with G__S__C being an account for “GrandmaSophiasCookies.com.” That site describes itself as “Your Favorite Music & Culture Blog,” and has plenty of articles by Higgins). The actual tweet here from Higgins was “Johnny Manziel being the Heisman winner in the manti t’eo doc feels like a tease for the inevitable Netflix doc that’ll be done on that guy.” [All improper capitalization his.]

On Friday, nine days later, Netflix’s official Twitter account responded with an eyeballs emoji, a short clip of Manziel preparing for an interview, and a clapperboard listing “Untold” and “Ryan Duffy” (one of two directors of The Girlfriend Who Didn’t Exist, alongside Tony Vainuku, and a series producer on Untold). So that makes it seem likely there will be a future Untold volume on Manziel, likely directed by Duffy. (It’s possible that this was from an interview done for the Te’o doc, but it seems unlikely Netflix would tweet it this way if it was.)

What’s really funny about this particular method of rolling this out, though, is that Higgins argued that his speculation that drew Netflix’s reply meant they should pay him. So he issued a demand for $1,000, and then after not getting it, deleted his tweet with a “No free clout” message.

He also offered this take:

And hey, that’s an option. Everyone’s Twitter account is their own, and if they don’t want to keep a tweet up after it’s been used for something they didn’t expect, that’s their call. But expecting a company to fork over $1,000 because they replied to a poorly-capitalized speculative tweet about something that might be a future documentary is certainly a choice. It seems quite clear that Netflix did not come up with and start interviews for a documentary on Manziel in nine days just because of Higgins’ tweet, and he’s far from the only person who’s suggested a Manziel documentary over the years. And, as the above embed shows, the Netflix tweet still embeds just fine despite Higgins deleting this.

At any rate, it does seem likely that there is something happening with Netflix and Manziel. Manziel responded with his own eyeball emoji:

This generated a lot of buzz about a potential Manziel Netflix documentary. And they didn’t even have to pay Higgins for that.