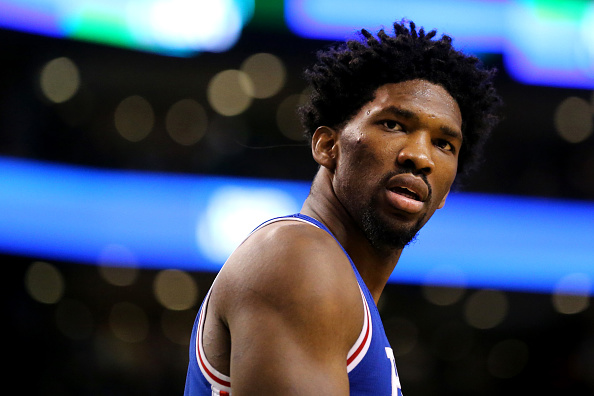 There are several things that influence what gets widely shared on Twitter. One is if the account that starts something is verified, and another is if one of the early retweets for an unverified account is from a verified account. Those ideas make some sense in general, but what they don’t check for is if the verified account is commenting on something within the scope of the expertise they were theoretically verified for in the first place. And that helps lead to situations like what we’ve seen over the past few days, with huge play for several accounts (both verified accounts in the first place and unverified accounts that were retweeted by verified people) that falsely claimed Philadelphia 76ers center Joel Embiid (seen above in 2017) “had the most 40/10 games in a season in NBA history” or “set NBA record for 40/10 games in a season.” Here are some of those tweets:

-NBA scoring champ
-First center to average 30+PPG since 1982
-Most 40/10 games in a season in NBA history
…all while getting double & triple teamed.@JoelEmbiid pic.twitter.com/OnCmLrv1YW

Most 40/10 games (13) in a single season in NBA history….Not Wilt. Not Kareem. Not Shaq. Not Duncan, not Hakeem, not Barkley, not Giannis, not Jokic, not Westbrook….

Thank you @JoelEmbiid for a HISTORIC season pic.twitter.com/0r6sa9xENv

Nikola Jokic does not lead the NBA in a single statistical category.

Joel Embiid has the most 40/10 games in NBA History. #ThisIsntRocketScience pic.twitter.com/hqQQCbRuz8

I've been screaming this!! No one, NOT QA SINGLE PERSON can tell me what Embiid did to lose the lead in the MVP race. Scoring champ, most 40-10 games, ONLY 40-20 game and had a better record than Jokic.

These claims led to several notable refutations. Here are a few of those:

Again, since this stat keeps coming up.

Reality: Embiid had the 14th most 40/10 games in a season in NBA history. Which is great! https://t.co/JdLkdquP4I

We need more basketball people in basketball who know that Joel Embiid having the "Most 40/10 games in a season in NBA history" is an absurdly ridiculous claim on its face pic.twitter.com/IH2QaNnYlf

Where did all of this come from? Well, one possible answer is in how the NBA has tracked rebounds over the years. As Basketball-Reference’s StatHead tool indicates, the league has officially counted total rebounds since 1950-51, but offensive and defensive rebounds only since 1970-71. It’s possible that some of the people using “40/10” here only looked at eras counting offensive and defensive rebounds separately, or only at stats since the 1976 NBA-ABA merger. But it’s notable that Chamberlain’s stats here were recorded in the NBA, not the ABA or any other league. If you’re going to disregard them, you should at least be forced to say “in the post-merger era” or something, rather than pretending that what Embiid is doing is unprecedented in NBA history.

But Eberley’s “no one fact checks anything anymore” comment above is perhaps particularly worthy of discussion. Especially as this appears to show that there aren’t consequences for accounts that put out false information. None of the four accounts quoted at top appear to have addressed the many, many people who have pointed out to them that Embiid’s 40/10 game totals were far from a NBA record, whether with a deletion, a follow-up correction, or anything else. And it’s interesting that Twitter has swooped down on misinformation in the political realm, doing so by suspending or banning accounts, but is not doing so with this sports statistical misinformation. Yes, the stakes are much lower, but these are still provable falsehoods, and they’re not seeing any action.

Meanwhile, these people are still reaping the rewards from the Sixers’ fans (and any other supporters of Embiid’s MVP case over Nikola Jokic’s) who continue to retweet their original tweets. And they’re reaping those rewards even after those tweets have been proven factually wrong. And it should be noted that that’s all that’s at issue here; these people could absolutely go out and lobby for Embiid over Jokic using actual stats, but instead, they’re doing so using false history. And there don’t appear to be any consequences for them doing so.