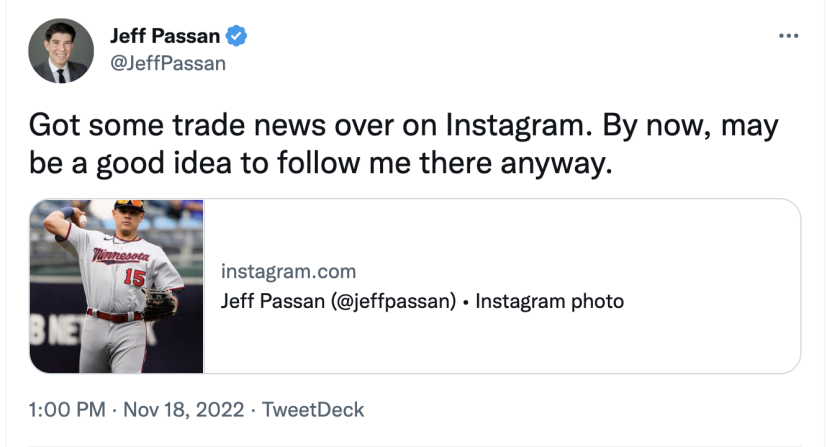 Whatever is going to happen to Twitter now that Elon Musk is tinkering with it like a child who doesn’t understand how anything works, it will have a profound impact on the way sports media reports breaking news. It looks like at least one notable insider is already moving his breaking news business away from Twitter in what could signal a larger shift in the days ahead.

On Friday, Jeff Passan broke the news that the Los Angeles Angels are trading Class A right-hander Alejandro Hidalgo for Minnesota Twins third baseman Gio Urshela. While breaking a story like this is nothing new for Passan, he specifically did so on his Instagram account instead of on Twitter. In fact, his mention of the news on Twitter was directly pushing readers to IG rather than providing information in the tweet as usual.

Got some trade news over on Instagram. By now, may be a good idea to follow me there anyway. https://t.co/QF0LRF30kh

This was the second time Passan has done this in recent days. On November 12, he broke the news about Rafael Montero’s new deal with the Houston Astros. Again, he left the details on Instagram only, driving Twitter audiences off-platform in order to get the gist.

Breaking news over on my Instagram: Rafael Montero, one of the best relief pitchers on the market, has agreed to a free agent deal. Check out @JeffPassan on Instagram for details on the team and the expected length and dollars of the contract: https://t.co/k9vubJvueC

“I think it’s time to start breaking some news on Instagram, too,” wrote Passan in the Nov. 12 post. “So follow me here for the latest free agent signings and trades.”

The ESPN reporter has continued to break plenty of breaking stories on Twitter as well in the last week, but the peppering of some breaking news on a different social media platform feels like a pretty significant shift in terms of strategy.

Given how important Twitter followings have been to “insiders” and breaking news reporters such as Adam Schefter, Adrian Wojnarowski, and Shams Charania, it stands to reason that if Twitter goes away or no longer acts as the “town square” it has been, these kinds of reporters are going to have to diversify or alter the way they break news.

Awful Announcing reached out to ESPN to see if Passan’s Instagram posts are part of any larger strategy but they declined to comment.

So far, it doesn’t look like any of Passan’s contemporaries at ESPN are trying out similar strategies, nor does it appear that any of the other major insiders have played around with different social media platforms. But given how little any of us know about what’s next with Twitter, it stands to reason that Passan is smart to consider a breaking news strategy that isn’t reliant 100% on tweets.