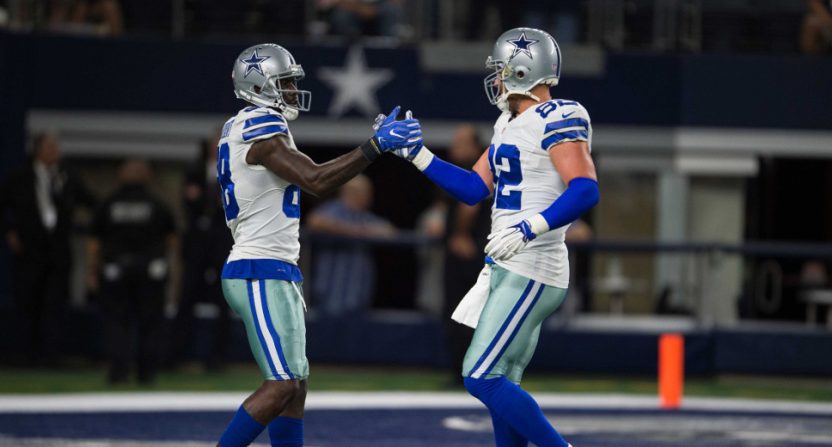 Two former Dallas Cowboys had very different takes on Twitter Friday. Cowboys’ tight end turned Monday Night Football analyst Jason Witten is apparently not a fan of Twitter, or at least, not a fan of how some current NFL players use Twitter. Meanwhile, Cowboys’ wide receiver turned free agent Dez Bryant (seen at left above with Witten during the 2016 preseason) used it to light up his former team after he was tagged in some radio criticisms from Cowboys’ CEO and executive vice president (player personnel) Stephen Jones (son of owner and GM Jerry Jones), saying they had “garbage ass playcalling,” claiming they forced him out, and calling former teammate Sean Lee a “snake.” Let’s start with Bryant:

Here we go with that scapegoat shit.. i charged everything to the game and went the other way.. y’all know what the real problem is .. don’t put it on me with that bullshit.. garbage ass play calling.. Everybody lined up in the same spot for 17 weeks.. ? ? https://t.co/YhG4cAPx6O

"He's gotta trust the system, which at times last year, there was pressure.. with Dez in his ear and to some degree Jason in his ear. Those great players want the ball" pic.twitter.com/DmjugEtU2c

Back to Dez’s complaints:

He’s not clueless.. Jerry was the only one who was clueless.. shit was a planned to get me out ask Travis and my brother snake Lee I mean Sean Lee https://t.co/7BK9cEkW90

Exactly I don’t why they are concerned about me.. I’m a cowboy fan… my time was up and we should just leave it at that https://t.co/T9XpBFQeP4

I got a lot of great stuff to do with my time.. I don’t have to suffer anymore https://t.co/Lt5HGFKwsX

Those are certainly some spicy takes. Meanwhile, in something not often seen from a color commentator, Witten penned a column of his own Friday, titled “How Twitter has become NFL locker room poison“:

I’ve seen the negative impact social media can have, particularly on younger players, who grew up with Twitter and Instagram as an integral part of life.

A player checking Twitter at halftime? I’ve seen it.

A player tweeting out a grievance with an organization about playing time or how he is being utilized? I see it far too often.

But the most concerning? Watching a really talented player corrupt his mind and confidence by reading all the critiques from anonymous football experts around the world. Negative social media can ruin a player. Reading your mentions? It’s poison.

…This isn’t “Ol’ Man Jason” preaching here. Hey, I like Twitter and Instagram — I’m on both, and they are great for finding articles, reading up, keeping up on breaking news, and staying connected with friends, family, and people you admire and respect. And look at what J.J. Watt was able to accomplish last summer when Houston was devastated by flooding. We’re talking millions of dollars for an incredible cause.

But the cons can outweigh the pros in a locker room, especially on this stage.

Oh, and Witten also goes on to talk about Twitter mobs, and to cite the opposition to Greg Schiano’s hiring at Tennessee as a case of a bad one:

Even outside the locker room, the Twitter mob can cause problems. Last year, we saw my alma mater, the University of Tennessee, attempt to hire former Tampa Bay Buccaneers coach Greg Schiano. But Vol Twitter erupted in disapproval, which led the administration to terminate the contract — and it eventually cost the athletic director his job.

Yes, public reaction certainly helped undo that hire, and some of it (in particular, claims Schiano knew about Jerry Sandusky’s sexual abuse of young boys at Penn State, to a degree not particularly supported by the facts at this point) may have gone too far. But, like much of the media outrage after that hire was overturned, Witten’s take here is pretty fiery. Just because some criticized Schiano for Penn State links doesn’t mean that all of the outrage was about that or was unjustified; there were also questions raised about his approach to player discipline both at Rutgers and in the NFL, and there were questions raised about how good of a coach he was in the first place (especially for a bigger program like Tennessee). And while it’s unknown how Schiano would have done at Tennessee, and unknown how current head coach Jeremy Pruitt will do, there are a lot of Tennessee fans much more excited about him. So that “mob” wasn’t necessarily all bad. And claiming every fan expressing concerns about a hire is part of a “mob” is a bold statement, as is claiming that programs shouldn’t listen when their fans complain in overwhelming numbers.

Beyond that, though, the claims about Twitter use in the NFL being “poison” are also quite spicy. Yes, of course, players should be careful to take critiques with a grain of salt, and there can definitely be a case for not regularly looking at your mentions. But the idea players tweeting out grievances, the way Bryant did here, isn’t necessarily all bad, or all that new. Players have always complained about organizations, coaches, strategies and playing times, and much of that criticism has wound up going public; before Twitter, a lot of that happened through particular sportswriters. And there’s an argument that players stating their grievances themselves can be much better; there’s no third-party filter on their comments and no anonymity (except for burner accounts).

Of course that’s not always helpful, and of course there are cases where it goes wrong, and that may even happen to Bryant here; teams may be concerned that he’ll undermine them as well if they bring him in. That’s not especially fair in this particular case, as Bryant was publicly responding to public criticisms from a Cowboys’ executive. (And as Littal noted, the media outlet in question is somewhat responsible for starting this thanks to tagging Bryant and only tweeting the part of the quote about Bryant.) However, there still are some teams who want execs to talk and players to be silent. But still, it’s useful that Bryant has a platform where he can address those criticisms without going through anyone, and while he may not have done so in the most diplomatic fashion, his move here isn’t all bad. And Witten’s unilateral declaration of Twitter as “locker-room poison” feels like a bit much.