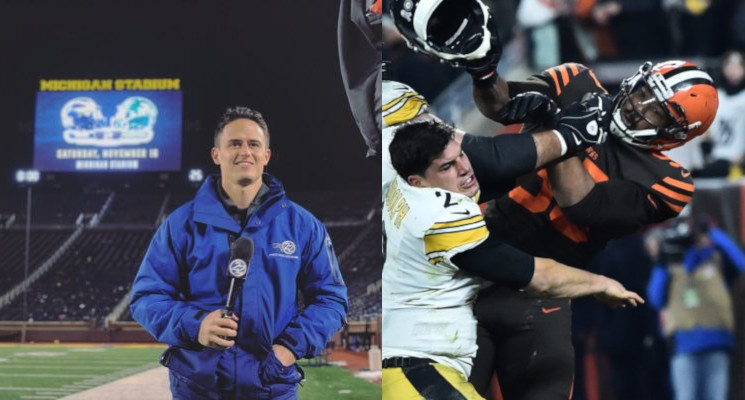 There have been plenty of cases of people who were mad at one figure but yelled at someone else entirely on Twitter, with some examples including Nationals’ beat writer Mark Zuckerman receiving criticism intended for Facebook’s Mark Zuckerberg, Blackhawks’ beat writer Mark Lazerus getting flak meant for NBC’s Mark Lazarus, NBC/NFLN’s Randy Moss getting mixed up with NFL player turned ESPN analyst Randy Moss, and, most terribly, people thinking WBAL anchor/Ravens’ radio announcer Gerry Sandusky is Jerry Sandusky.

The latest case of mistaken identity comes after the helmet shot heard around the world from the Cleveland Browns’ Myles Garrett Thursday night, which led to a lot of people yelling at Miles Garrett, a sportscaster for WSBT (a South Bend, Indiana-based station affiliated with CBS and Fox). On Friday, sportscaster Garrett first used a meme to illustrate what was going on:

Then, he offered an “apology” for his actions, which, unlike the actions of the other Garrett, did not include hitting Mason Rudolph in the head with Rudolph’s helmet:

I’d like to formally apologize to @Rudolph2Mason for my actions last night. Inexcusable. And I’m glad I’ve been called out for it. pic.twitter.com/IxutQ38F7O

He also showed off some more of the abuse he’s taken:

That’s well played by Garrett. Other media figures chimed in with some funny commentary as well:

We will be burning @MilesGarrettTV at the newsroom stake this afternoon for what he did last night to Mason Rudolph…stay tuned for details https://t.co/RjzJp1LW3D

Twitter police in full force today! Except they have the wrong man in custody. I have petitioned the FCC to get WSBT’s Miles Garrett suspended, for what it’s worth. They all need to go. https://t.co/W1MtBOToGw

Looking at his mentions can’t be too enjoyable for Garrett right now, especially given the furor the other Garrett’s actions have caused. But hey, at least he was able to have a little fun with the situation. It would be nice if people who want to yell at famous figures on Twitter took a couple of seconds to make sure they have the right one, though.