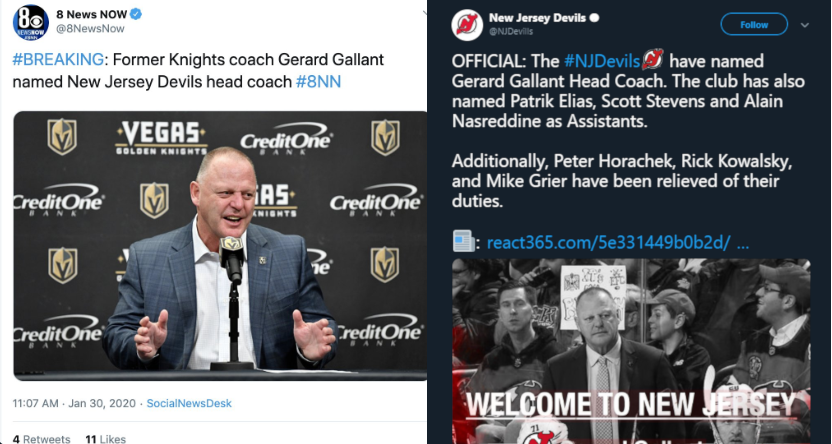 There are plenty of people out there who create fake social media accounts to impersonate players, reporters or leagues, and some big names and organizations are sometimes fooled by that and spread fake reports as a result. The latest case of this comes from Las Vegas CBS affiliate KLAS, which fell for a fake tweet that former Vegas Golden Knights’ head coach Gerard Gallant had been named the head coach of the New Jersey Devils. ESPN’s Greg Wyshynski tweeted about this Thursday:

So a Devils parody account spoofed a bunch of media people on Twitter with this news, but this Las Vegas CBS affiliate reeeeeallllly took the bait. Wow. pic.twitter.com/3kMs5eRoY7

As Wyshynski noted, KLAS wasn’t the only outlet fooled, but they certainly were fooled on a pretty significant level. This wasn’t just a tweet; KLAS ran a full story on this on their website. They’ve since added a correction, changing the title to “CORRECTION: New Jersey Devils say fake information being circulated on the hiring of former Knights coach.”

Here’s what the story includes now (although it’s still at the URL of “https://www.8newsnow.com/news/local-news/breaking-former-knights-coach-gerard-gallant-named-new-jersey-devils-head-coach/“):

Peter Albietz, the vice president of Hockey Communications & Team Operations for the New Jersey Devils told 8 News Now “That was a phony Twitter account. Not true.”

8 News Now regrets the release of the information and or any inconvenience it may have caused.

The online correction is a good step, and KLAS deleted their initial tweet. But they didn’t offer any apology or correction on Twitter, which is unfortunate. Yes, they would have taken some more flak there for doing so, but Twitter’s where they spread this bad info, and they should have addressed it there as well as on their site.

What’s particularly interesting is that this wasn’t all that sophisticated of a fake. Many of the deceptions we’ve seen before involve changing an account name in a subtle way that isn’t easily detectable with Twitter’s fonts and cases (hello, @AdarnSchefter). Or people taking the time to invent themselves as fake reporters or quote sources. But this one came from an account that just added an extra L in Devils, and put out a very substandard graphic (look at how poorly the Devils’ logo is photoshopped onto the helmet) as well:

Additionally, Peter Horachek, Rick Kowalsky, and Mike Grier have been relieved of their duties.

What probably helped with the transmission of this one was that there’s some logic to the various pieces. A Devils’ coaching change certainly could be coming, as the team parted ways with GM Ray Shero earlier this month, replacing him with Tom Fitzgerald (and with more personnel advice from franchise legend Martin Brodeur, who previously had been focused on the business side). And it wouldn’t be too surprising to see Gallant get another NHL job soon. He was only fired earlier this month, and he’s well-respected for getting the expansion Golden Knights to the Stanley Cup Final in their inaugural season, plus his overall NHL record of 270-216-4 is certainly decent.

It also might make some sense for Stevens and Elias to be named as assistants. Both are Devils’ legends, both have some coaching experience (Stevens as an assistant with the Minnesota Wild in 2016-17 before he left to spend more time with his family near New Jersey, and Elias as an assistant with the Czech junior team), and both have been discussed as Devils’ coaching possibilities. And it’s even possible that Nasreddine (the current interim head coach, a role he’s held since John Hynes’ firing last month) might stay on under a new head coach. So the information here isn’t necessarily ridiculous on its face.

But the NJDevills account (and its lack of verification, unlike @NJDevils, although it tries to pose as a verified account with a check graphic), and its 127 followers (to 740,000 for the real deal) and the “react365.com” link, and the terribly-photoshopped image should have warned KLAS off. And it’s amazing that KLAS felt the need to quote a team spokesman confirming this was fake. Maybe they should look a little more carefully themselves the next time they try to do a story based solely on Twitter.