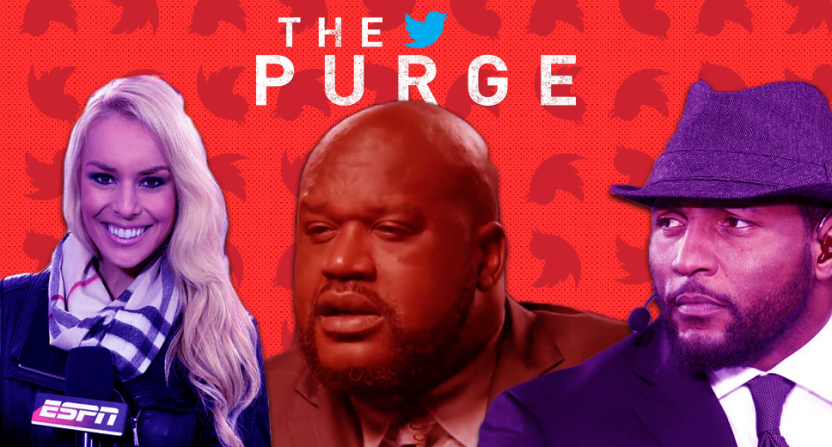 In the wake of 2016 U.S. election shenanigans and reports such as this New York Times one on the booming business of fake social media accounts, companies like Facebook and Twitter have been attempting (at least in theory) to push back against bots, spammers, and fake accounts that inflate numbers and attempt to influence trends and discussions. Twitter recently announced that it had been locking accounts that were suspected of being spammers or fake and that it planned on purging many of those accounts wholesale. That also meant that it was likely Twitter users would see a decrease in the number of followers they had, depending on how many of those fake accounts happened to be among them.

The Twitter Purge, as it were, commenced on Thursday, and plenty of high-profile Twitter users suddenly saw their follower accounts plummet. Some celebs, politicians, and athletes were affected more than others (Former President Obama just lost over two million followers, current President Trump has lost 300K so far) and though the dust is still clearing, we’ve got a pretty good idea of which people had a sizable chunk of fake followers up until now.

Twitter completed its fake account purge today. One person who reportedly bought fake followers was Ray Lewis, who lost about half his followers pic.twitter.com/z8BNzECthv

ESPN college football analyst Joey Galloway was also called out in that New York Times report for buying some of his followers. Before that story was published he had 99K followers but as of Friday he now has roughly 43.6K, though it’s unclear exactly when he lost so many of them.

Former ESPN employee and Fox 5 DC host Britt McHenry also got hit hard by the purge, dropping from 362K followers to around 223K. As the Washington Post notes, McHenry had over 506K followers back in January before the New York Times report which indicated she purchased followers, meaning she’s lost over 50 percent of them since then as well.

Another was former ESPN employee Britt McHenry, who lost about 140,000 followers pic.twitter.com/GORSzkcD0r

Another person who lost a ton of followers in the purge was TNT’s Shaquille O’Neal. While the loss of around one million followers sounds like a lot, O’Neal still has 14.6 million followers to keep him company. O’Neal was not mentioned in any previous reports to buy followers and given he only lost about six percent of his follower count, that seems in line with other famous people who get a lot of fake followers simply because of how famous they are and not due to buying them.

You might have heard of CollegeInsider.com, though it’s possible you mostly know this college basketball outlet for their sponsorship of the CollegeInsider.com Tournament (CIT), which gives mid-major and small schools who did not get selected for the NCAA Tournament or NIT a chance to play in the postseason. According to reports, their Twitter account @collegeinsider, which is under the name of co-founder Angela Lento, shed about 130K accounts off its follower list.

Whether or not that these inflated follower counts were purposeful to bump up their media value or were incidental based on a person’s high-profile status, might be a question for another day (though that won’t stop people from assuming). The question of whether or not the purge actually does anything to prevent the spread of spam, fake content, and conspiracies is also one we won’t exactly know the answer to for some time.

It’s unclear if the Twitter Purge is over or not. If you’ve noticed any other sports media personalities or companies who saw a significant drop in followers, let us know and we’ll add them to the list.