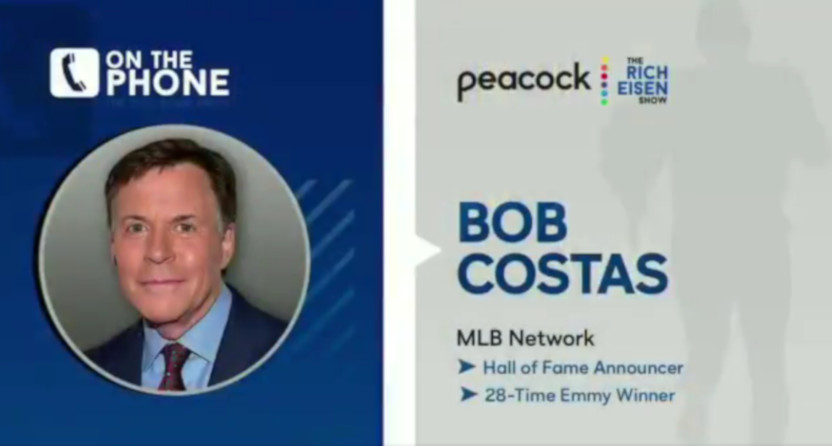 One of the funniest sports media radio segments in some time comes from Wednesday’s episode of The Rich Eisen Show (on NBCSN, Peacock, Sirius XM and radio affiliates), which saw Bob Costas call in to confirm that the Twitter account that showed up last night claiming to be him was not, in fact, him. Costas had previously said that hell will freeze over before he joins Twitter, and he reiterated that in this appearance and added several other funny lines, such as how he’d rather return to Sochi and get pinkeye again than join the social media service. Here’s the clip:

When we saw Bob Costas trending on Twitter this morning, and then found out why, we had to call the man himself to get the full story and confirm that the mystery account was in fact NOT Bob: pic.twitter.com/VYQh836WAm

And a transcription of some of the best lines on this, starting from the top:

“I’m good, Rich, and it’s appropriate that I would be on with you, because you have chided me good-naturedly ‘Are you on Twitter yet? What would it have to take before you were ever on Twitter?’ And late last night and again this morning when I woke up, there were dozens of texts, some claiming it must be real, some saying ‘This can’t be true,’ and one said ‘This is the best indication that hell has frozen over since the ’04 Red Sox or the 2016 Cubs.’ But I’m here to assure you and everyone else that the fires of hell are still very much blazing, because I am absolutely not on Twitter. They have taken the bogus account down.”

“And I began thinking ‘You know, what would I have to do before I ever deigned to be on Twitter? Binge-watch The Real Housewifes of Orange County? Hire Rudy Giuliani as my personal attorney? Make a return trip to Sochi just for the nostalgia of the pinkeye episode? Star in a sequel to Baseketball? Or, just for you, Rich, make a special trip to the NFL combine. All those things will happen before I’m ever on Twitter.'”

Costas does go on to say that he would consider a Baseketball sequel, especially if it gave him another chance to work with Al Michaels (who won this year’s Ford C. Frick Award, three years after Costas won the last one for national voices). So that could theoretically still happen. But he will not be joining Twitter any time soon. And this was a very funny and very clever way to rebut that rumor.