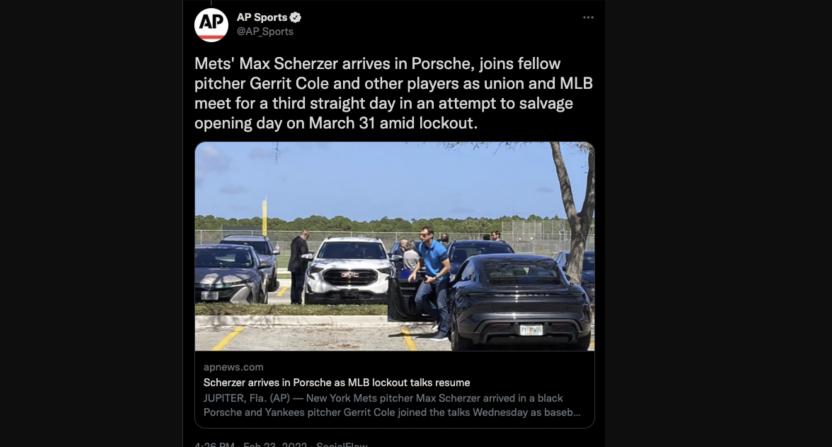 Historically, how media organizations cover professional sports league lockouts or strikes can say a lot about who their sources are and what kind of narrative those people want to project.

While American support for unions is at one of its highest points in decades, the image of the coddled millionaire professional athlete refusing to play over compensation concerns is a well-worn tactic employed by team owners who want to turn the public against them. It tends to have an impact too, as players are more visible and more well-known, not to mention that the modern sports media news cycle is built on daily hot takes about them.

A thesis by Jonothan Lewis at Florida State University in 2012, which was based on media coverage of the 2011 NBA lockout, noted a “greater scrutiny of employee salaries rather than those of management, coverage that emphasizes management ‘offers’ rather than union givebacks, and the use of a third-party, ‘consumerist’ perspective that allows the media to appear objective while espousing management viewpoints.”

In other words, it’s not uncommon for media coverage to give an edge to the owners.

Major League Baseball’s owners unanimously locked out the players in early December saying, at the time, that they hoped it would “jumpstart” negotiations as the previous CBA between the two sides had expired. However, despite being the ones to instigate negotiations, the owners waited more than 6 weeks to make their first proposal, one that was not met with enthusiasm by the players.

Both sides eventually started meeting in late January and, while the players union rejected MLB’s proposal, concessions were offered on both ends. The two sides would meet once more but remained unable to come to an agreement. MLB made a formal request for a federal mediator to help resolve matters but the players union rejected that offer, noting that MLB had failed to deliver a previously promised counterproposal. The players instead said in a statement they wanted to return to the bargaining table.

Reporting the story at the time, the AP Sports’ Twitterfeed followed up its initial tweet on the proposal rejection, which included an article written by Ronald Blum, with language that many took to be pro-owner and anti-player in its sentiment.

“By rejecting Major League Baseball’s request for a federal mediator to join stalled labor talks, locked-out players pretty much eliminated any chance for spring training to start on time and raised fresh concerns about opening day,” read the tweet.

The tweet was met with plenty of pushback over the way it seems to imply the players are at fault, and not just one side of the negotiation. Not to mention the way the tweet puts the onus on the players to solve a situation created by the owners.

AP carrying water for MLB like this is a disgrace. The league locked out the players. It's an abdication of the writer's integrity to BLAME THE PLAYERS FOR BEING LOCKED OUT https://t.co/0PrIinmfUN

Objectivity in journalism does not — I repeat not — mean turning off your brain and framing the story in the way that it was told to you by a source, lest you find yourself writing embarrassing things like "players eliminate any chance for spring training to start on time"

This is the Eric André of tweets. Why did the players do this? Lol

Blum has been the AP’s main writer on lockout stories and some critics started drawing connections between his coverage and the kind of messaging they were seeing from the AP Sports Twitterfeed.

Spring Training was indeed delayed on February 18 and the two sides have been meeting every day this week in order to find whatever common ground or concessions are needed to agree on a new CBA and for the owners to end their lockout.

However, on Wednesday, the AP Sports Twitterfeed once again provided additional context on their reporting of the day’s negotiations that sends a very classic anti-player message.

Mets' Max Scherzer arrives in Porsche, joins fellow pitcher Gerrit Cole and other players as union and MLB meet for a third straight day in an attempt to salvage opening day on March 31 amid lockout.https://t.co/9kqPHgAFMK

“Mets’ Max Scherzer arrives in Porsche, joins fellow pitcher Gerrit Cole and other players as union and MLB meet for a third straight day in an attempt to salvage opening day on March 31 amid lockout,” reads the tweet, describing the image that accompanied the AP article.

For what it’s worth, the photo caption on the article simply refers to it as his “car,” which makes the brand mention on Twitter stand out even more.

Ed. Note – The photo of Scherzer exiting his Porsche was swapped out for a different photo later on, which changed the photo that appears when the link in the tweet is enlarged. The original image can be seen below.

It’s hard not to see the mention of a player arriving in a Porsche as a very pointed message. And that message, as well as the name of the writer of the article, was not lost on many people who saw it.

Every single one of these ridiculously pro-billionaire, anti-worker stories from the @AP have been by @ronaldblum & it's really an indictment that nobody at AP has stepped in to recognize what's happening. pic.twitter.com/VIudYl5c8U

I’m sure it just slipped @ronaldblum’s mind to detail the various private jets that brought the owners to these meetings https://t.co/ezJobrmuoR

Ronald Blum and AP typically have had very fair and balanced coverage of labor issues, most notably during the 2020 shutdown, so I'm not sure what the hell changed with the lockout https://t.co/3HpawIm6BV

You might remember the writer of this AP headline, Ronald Blum, from his other greatest hit, “players eliminate chance or spring training starting on time”. It is straight shameful that the AP allows him to publish this garbage under the guise of objectivity. https://t.co/x8QHUg4cDy

Thanks Associated Press. Did you that if Max Scherzer arrived in a convoy 9,999 Porsches worth $100,000 each, that wouldn’t even be a billion dollars worth of Porsches. Steve Cohen has 18 billion dollars, hope this helps!

While dunking on Blum and the AP’s handling of lockout coverage on Twitter may or may not have an impact, the narrative that a media outlet like the AP can craft and disseminate across the country has a sizable impact on the way situations like this are perceived by the general public. According to their own website, “more than half the world’s population sees AP journalism every day.” There’s a responsibility that comes with that.

Given its reach and the power of a simple headline or, in this case, a tweet, framing matters. And framing this situation as “greedy players who want more money” with a photo can often say more than any 1,500-word article can, whether purposeful or not.