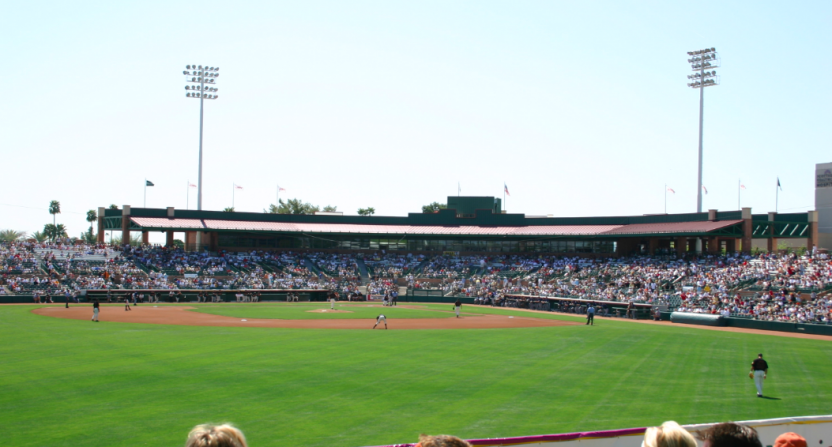 “You prove that you are a complete waste of human flesh with no redeeming valuea [sic] ever time you tweet. Resign you dumb nazi whore.”

That’s a tweet sent from a now-deleted anonymous Twitter account on January 30 in response to Arizona State Senator Michelle Ugenti-Rita, a Republican representing eastern Maricopa County. As the Phoenix New-Times recounts, this was the latest in a string of sexist and vulgar comments directed at Ugenti-Rita that led to the unmasking of the account’s owner, Josh Miller, who worked as the San Francisco Giants spring training PA announcer since 2003. He resigned from that role this week in the fallout.

The New-Times reports that Miller, who has also done sports announcing with Grand Canyon University and the Arizona Fall League, has been posting about Ugenti-Rita in similar ways since November using an account called ZonaJosh. While the state senator has been the recipient of many angry and vitriolic tweets over the past few months due to her criticism of COVID-19 quarantine and safety concerns as well as her backing of election-based changes that would remove voters from voting lists, it was the aforementioned tweet that caught her attention and caused her to look into who might be behind the account.

After responding to that tweet, Ugenti-Rita was notified by someone that the person behind the account might be Miller and it didn’t take too much detective work to see shared images and other similarities between his personal Twitterfeed and the anonymous account.

Miller initially denied that he was behind the account but the ZonaJosh account was deleted soon after. Ugenti-Rita then added more examples of shared images and text that made it pretty undeniable.

The next day, Miller did what so many have done before him, posting a Notes app apology on his Twitterfeed in which he admitted to being the person behind the account. Soon after, he posted another message saying that he had resigned from his position as PA announcer for San Francisco Giants spring training games at Scottsdale Stadium. He also noted that he would be deactivated his Twitter account, which he eventually did. 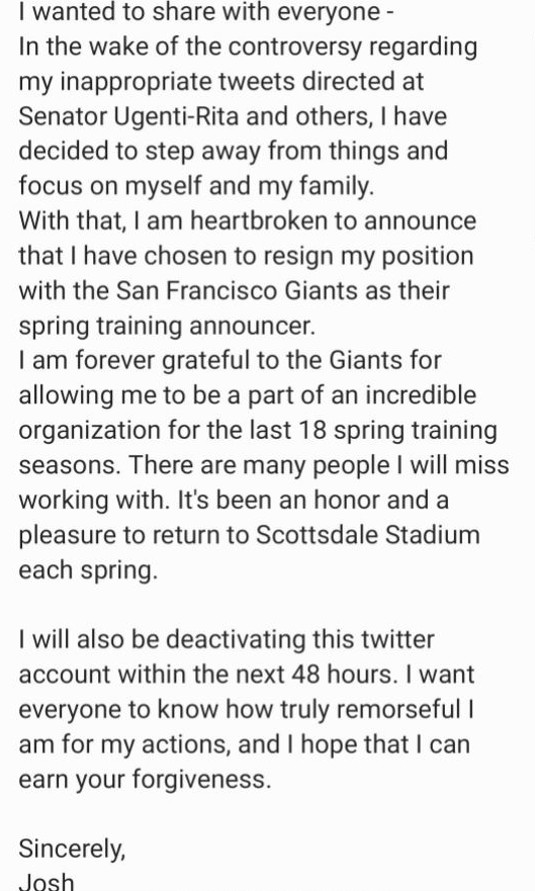 “I am forever grateful to the Giants for allowing me to be a part of an incredible organization for the last 18 spring training seasons. There are many people I will miss working with. It’s been an honor and a pleasure to return to Scottsdale Stadium each spring… I want everyone to know how truly remorseful I am for my actions, and I hope that I can earn your forgiveness.”

Miller told the New-Times that even though much of the language he used in his tweets was misogynistic, he did not feel as though that was his intention.

“This is strictly about her policies, which I thought put a risk to my family and the community,” he said. Miller said that as a parent, he was frustrated by Ugenti-Rita’s support of resuming in-person instruction in schools.

“I called her names. I would not call them misogynistic,” he said, adding that he’d also directed different insults toward men and that, “I don’t consider myself a misogynistic person.”

That sentiment is hard to square with certain words and phrases used in the tweets.

The Giants released a short statement on Friday, saying that “after learning of this issue he will no longer be working for us.”