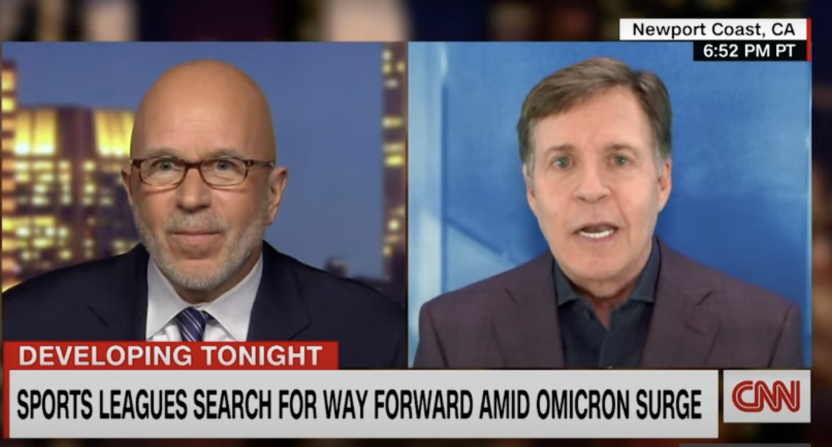 Broadcasting legend Bob Costas has been back in the spotlight in recent months doing baseball work for MLB Network and TBS following a career that’s taken him to just about every major sport, sporting event, and sports interview show out there. He also hasn’t been shy about sharing anecdotes along the way, from whether or not he’s still got his broadcasting “fastball” to the time he almost left NBC for CBS to host The Late Late Show.

Costas joined Michael Smerconish on CNN on Wednesday and the two discussed the way pro and college sports are navigating the Omicron outbreak, which had led to a myriad of players testing positive, games getting pushed back, and teams opting out of games altogether.

Costas was pretty blunt about “this anti-vax stuff” which he calls “belligerent idiocy.” And while Costas says we can debate whether or not people need to wear masks and if it’s okay to send kids back to school, when it comes to vaccines, the leagues should be striving to be 100% vaccinated. And if they’re able to do that, Costas thinks there’s an obvious change to the way of doing things that could prevent future game delays and cancellations.

“The evidence about vaccines is overwhelming,” Costas said. “The hospitalization rate, the serious illnesses, and the deaths all lean heavily in the direction of those who are unvaccinated. Now, what to do about those who are vaccinated? Especially healthy young fit athletes.

“If you were able to say that everyone, all the players, and all the people around them, staff, have been protected to the fullest extent that’s humanly possible. I think you could then reasonably say – and even the most pro-vax people would agree, I would hope – you could reasonably say that if a player who’s fully vaxxed and boosted, a young, healthy, fit player tests positive but is asymptomatic or has mild symptoms, that guy would be allowed to continue to play.”

“I think ultimately, that’s the way forward. Otherwise, you’re gonna have this hodgepodge situation every season with every league, until the virus is completely gone. And the virus may wind up, to one extent or the other, endemic.”

Costas isn’t a medical professional and it seems as though he’d be the first to tell you that, but there’s growing consensus for this kind of thinking. The NFL recently made changes to its policies that tighten protocols but also shorten the time in which a player can test out. The NBA has said it has no plans to pause its season but is looking into potentially shortening the amount of time that players need to sit out while also pushing to get more players vaccinated. NBA commissioner Adam Silver has also said the league has considered the possibility of allowing COVID-positive but asymptomatic players to keep playing but the NBA “is not quite there yet.”

These kinds of changes probably won’t gain traction until we’re out of the Omicron outbreak and have a chance to see what’s ahead in terms of COVID, vaccine availability, boosters, and more. In the meantime, everyone has their own best idea of what sports leagues should do, for better or worse. Meanwhile, caution and capitalism will continue to clash accordingly.