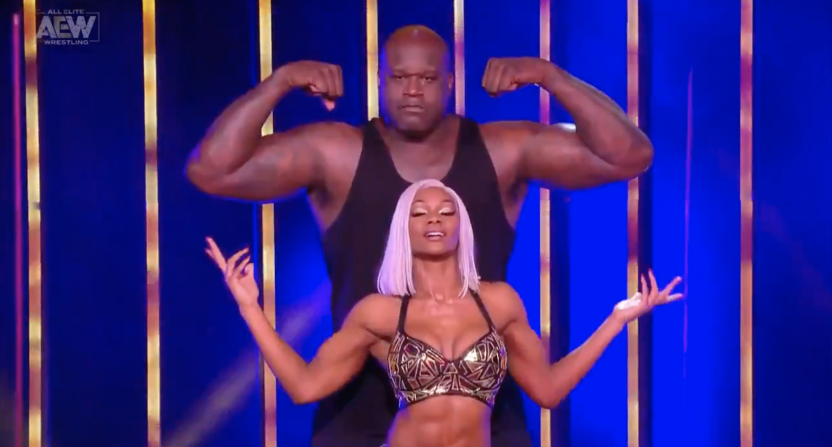 When it was announced that 48-year-old Shaquille O’Neal was going to be making his AEW debut, it was natural to be at least somewhat skeptical that the match would be any good. Shaq went through 20 physical seasons in the NBA and even though pro wrestling is scripted, it’s still a very physical sport that wears and tears the body.

HERE WE GO! If you're not watching you better tune in right now!
Watch #AEWDynamite NOW on @TNTDrama.@SHAQ @Jade_Cargill pic.twitter.com/wmM5X7Bl3I

Up to the test, Shaq exceeded expectations as he and Jade Cargill defeated Cody Rhodes and Red Velvet in a high-impact mixed tag team match on AEW: Dynamite.

Shaq and Cody locked up first and Shaq showed off his strength right off the bat. While Cody had the wrestling ability, Shaq had size and that’s what made the matchup believable. Shaq tossed around Cody like a ragdoll and chopped him in the chest with the type of sound you could hear throughout Daily’s Place. Shaq even took a chair shot to the back and in the spot everyone will be talking about, he and Cody went through a couple tables outside the ring.

Not to be overshadowed, Cargill and Velvet put on a show in their own right. With Shaq not being an AEW regular and Cody already an established star, this was a platform for the two women, who are new to AEW, to shine. And that’s just what happened after the table spot.

Velvet held her own but Cargill was the star and ultimately, she won the match for her and Shaq. Cargill is strong and athletic and given AEW hasn’t done the best with their women’s division, this match was a great launching pad for two women who can really help make the division stronger.

As far as Shaq is concerned, I kind of want to see him wrestle again. I probably wouldn’t have said that before tonight but he can hold his own in the ring. Obviously, even without his Inside the NBA duties, I wouldn’t want Shaq to be wrestling every week. But if the situation works, and he has an opponent who can lead him through a great match, it might be nice to have Shaq do one or two matches per year and be an attraction for PPV and ticket sales when we get back to full arenas.