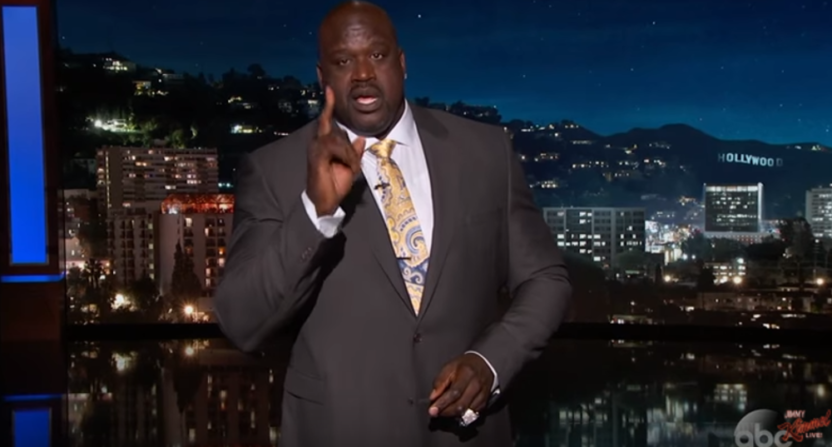 ABC late night host Jimmy Kimmel is taking a week off thanks to a household cold that wound up postponing his son’s second heart surgery, and so he has guest hosts filling in. On Monday, that role went to Shaquille O’Neal. While Shaq’s been doing TV for a long time (he and his mother were featured in a documentary that aired on ESPN, he had a 2005 Shaquille reality series on ESPN, a 2009 Shaq Vs. series on ABC, and a 2013 Upload With Shaquille O’Neal series on truTV, and he’s been working as a TNT analyst since 2011), this marked his first foray into being a late-night host. (And one of the first forays into that realm for any professional athlete; many have been guests, but Magic Johnson’s about the only one to have a late-night show.) Despite some occasional awkwardness, though, Shaq did pretty well, and his monologue had some pretty interesting moments, including him bashing Los Angeles CW affiliate KTLA for their joke about it being one of his errant free throws (rather than a bird) that damaged the Oklahoma City Thunder plane. That comes at 2:35:

“We’re going to have a good time tonight, but I gotta be honest, my day got off to a bad start. I woke up, had my morning bowl of Fruity Pebbles, and saw this story on the news. (He shows a clip of KTLA discussing the incident, where one anchor mentions “Officials for Delta Airlines think it was a bird strike,” someone off-camera comments “Or Shaq, shooting the free throws” and the anchors crack up. Then he gives the audience a sad look.) Those bastards. I’ll never watch Channel 5 again!”

“Hosting a late-night show is a new thing for me. It’s like when Michael Jordan decided to play baseball, except I’m going to be good at this.” (1:00)

“I have all the things you need to host this show, a suit, a band, a stupid no-talent nemesis. See, Jimmy has Matt Damon, and I have Charles Barkley. He’s like a balder, fatter Matt Damon.” (1:15)

“As you may know, I have a lot of nicknames. Superman, The Diesel, Shaq-Fu, Big Daddy. But now that I’m a late-night host, I came up with a new nickname for myself. Arsenio Tall. What about Jimmy Shakimmel? I’ve got more. Phil Donahuge. Conan O High One. Shaq Parm. Oprah Win Free Throws. Anderson Hooper. Black Sajak.” (1:30)

“Is everyone ready for Halloween tomorrow? In my house, we do things a little different. See, the trick-or-treaters have to dunk on me to get candy. Not in my house, Elsa!” (3:30)

“For me, this is super exciting. I’m halfway through my first monologue, and I’ve already had a late-night show longer than Magic Johnson.” (6:30)

That’s not bad at all for a debut from Shaq. Which is more than you can say about some of his other projects. But we’ll see how other guest hosts Dave Grohl, Channing Tatum and Jennifer Lawrence do.