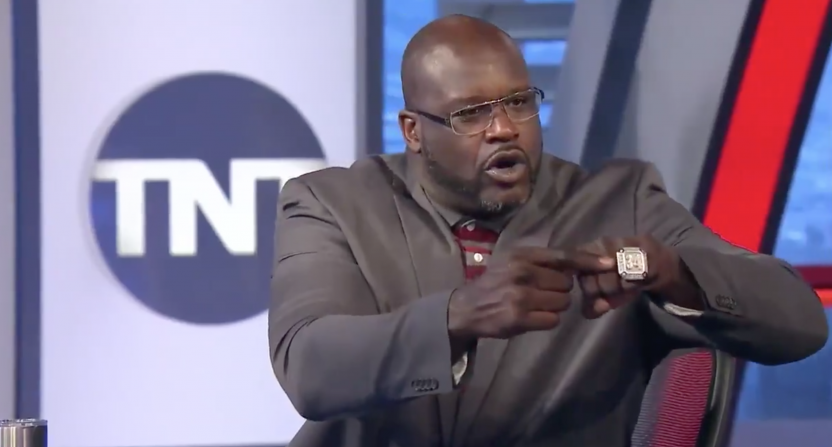 Shaquille O’Neal and Charles Barkley have blustered, bantered and argued many times before. Their frenmity is a defining part of Inside the NBA.

And yet, things rarely get quite as heated as they did Tuesday night, when Chuck said that Raptors coach Dwane Casey had to quickly smooth things over with DeMar DeRozan after benching the All-Star in crunch-time of Toronto’s Game-3 loss to the Cavaliers. Here’s how the conversation went:

Barkley: He has to repair his relationship with DeMar DeRozan.

Barkley: Yes he does.

Shaq: No he doesn’t.

Barkley: Listen, if you bench your best player—

Shaq: Why was he benched?

Barkley: That’s not the point.

Shaq: It is the point.

Barkley: Well, in your opinion.

Barkley: No, just because you say something, that’s just your opinion.

Barkley: It’s not true you had Dwyane Wade was the man on that team.

Barkley: Don’t even start it.

Shaq: I was a role player, you’re right, but me and him didn’t get along.

Barkley: That’s my point. But I’m just saying, with your best player—

Shaq: You don’t know what you’re talking about when it comes to championships.

Barkley: Dwyane Wade carried you to that championship. Now matter how much you scream loud, that does not make you right.

Shaq: You’re a baby. Stop babying these players. He don’t play, he gotta sit his ass down. Period.

Barkley: He’s got to repair—

Shaq: He ain’t got to repair nothing. He’ got to stop babying his players. You got babied, and that’s why you ain’t win.

Barkley: I didn’t have Dwyane Wade and Kobe Bryant carrying me up and down the court.

Shaq: So why you in the Hall of Fame then? I got three Finals MVPs, Chuck. Google me. Google me, Chuck. [points to ring] You see that? Google me.

Barkley: Everybody know you were a great player. That don’t mean—

Shaq: You don’t know what you talking about when it comes to championships. He ain’t gotta repair nothing. He gotta step up and play a player. It’s the playoffs.

Barkley: We all didn’t have other players carrying us up and down the court. You can yell as much as you want.

Shaq: I’ve got three Finals MVPs. How many you got?

Barkley: You were a great player.

Barkley: But you wouldn’t have gotten ’em if you didn’t have Kobe and Dwyane—

What started as a somewhat petulant “yes he does/no he doesn’t” back-and-forth got personal in a hurry. By the time Kenny Smith broke in to relieve the tension and end the debate, both Shaq and Chuck seemed about done with their yelling. Here’s the clip:

Chuck and Shaq get heated in a back-and-forth on coach-player relationships…#InsideTheNBA pic.twitter.com/ElQxwBV5s7

So who won the argument? Well, Charles is probably right that Casey should make sure things are cool with DeRozan. But Shaq is probably right that a coach and a star don’t have to be perfectly in tune with each other. Plus, Shaq makes a pretty compelling ringzzz argument. Chuck does accurately point out that Dwyane Wade was the best player on the 2006 title-winning Heat team. And besides, having championships doesn’t make someone the all-knowing authority on basketball. Then again, it’s hard to argue with three Finals MVPs and the haunting question, “How many you got?”

The awesome thing about Inside the NBA is that Shaq and Chuck can go back and forth like that, jabbing each other where it hurts, and be laughing and joking together tomorrow. After all, we’ve seen practically this exact argument before — last year, when Barkley accused Shaq of “riding Dwyane Wade and Kobe’s coattails,” Shaq called Barkley a “bum,” Barkley alluded to Shaq’s “fat ass” and Shaq went after Barkley on Instagram.

Hell, these two have been feuding since their playing careers.

Whoever you think was right or wrong in Shaq and Charles’ argument Tuesday, it’s hard to deny it made for great television. Never change, Inside the NBA.