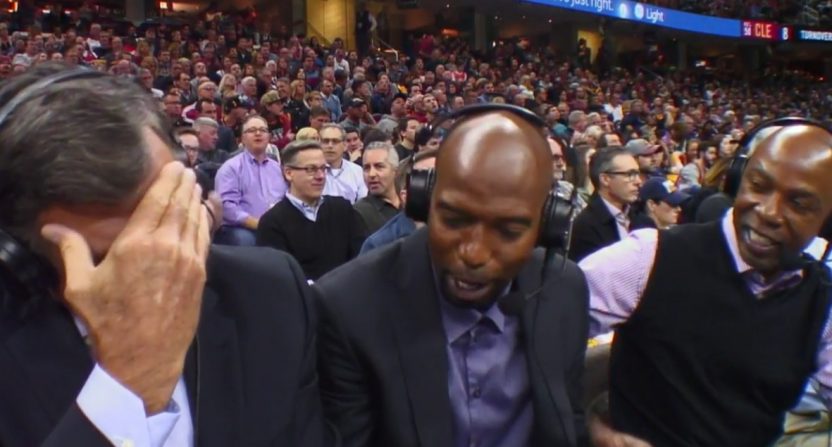 TNT’s new Players Only broadcasts kicked off Monday night, and the first game of the double-header already saw a notable on-air exchange. Greg Anthony, Rip Hamilton and Kevin McHale were calling the Bucks-Cavaliers game, and when the Bucks’ Jason Terry made a shot, Hamilton used that as an excuse to bring up the 1999 draft class (he went seventh overall, Terry went 10th) and rib McHale (then the general manager of the Minnesota Timberwolves) for taking Wally Szczerbiak instead of him with the sixth pick. Here’s the first part of that exchange, with Hamilton saying his agent told him Minnesota was going to take him and asking McHale what happened, and McHale responding “Just a mistake”:

McHale then elaborated that “We were looking at Wally to get some more court-spreading, and he had a little more range than you at the time, but there’s no comparison between your career and Wally’s career.” Anthony then says Szczerbiak had a solid career and made the All-Star team, and McHale says “I love Wally, great guy and stuff, but I think we might have been able to use Rip a little bit more.”

He then discusses how player projection is challenging, and says that’s something new Lakers’ president of basketball operations Magic Johnson will have to learn, but finishes with “just another mistake by McHale”:

The interesting part of this highlight is it could have perhaps existed outside of Players Only. McHale and Hamilton are both working in more of the standard analyst roles on this broadcast, as opposed to Anthony (play-by-play) and Dennis Scott (reporter), and they could maybe have had this conversation on a regular broadcast. However, the conversational feel Turner is going for likely had a lot to do with this too, and all of these guys handled it well; they picked their spot (there was game action going on, but nothing incredibly notable, and they didn’t drag this out), Hamilton asked the question in more of an interested way than an accusatory way, and McHale responded not just by admitting he made a mistake, but continuing to own up to it even after Anthony gave him a potential out by mentioning that Szczerbiak was good too.

(There is a point there, though. While McHale may have missed by taking Szczerbiak instead of Hamilton at #6, that isn’t the most embarrassing miss from that draft. The guy who really missed was then-Toronto Raptors GM Glen Grunwald, who drafted high school forward Jonathan Bender at #5. Grunwald would later flip Bender to the Indiana Pacers for Antonio Davis, who also had an All-Star appearance, but Bender only averaged 5.6 points in 237 regular-season games with the Pacers and has been ranked as one of the biggest draft busts in history. Meanwhile, Grunwald is now the athletic director at Hamilton, Ontario’s McMaster University. Perhaps Hamilton should go broadcast a game there and ask Grunwald about passing on him in 1999 as well. Of course, the Raptors did already have Vince Carter, so they may have ignored Hamilton because he was also a shooting guard, but even as a trade chip, he might have been worth more than Bender.)

In any case, this certainly showed the conversational potential of Players Only, even if it was really a conversation between a former player and a former executive. If these broadcasts can keep giving us entertaining discussions like this, they could be well worth watching.