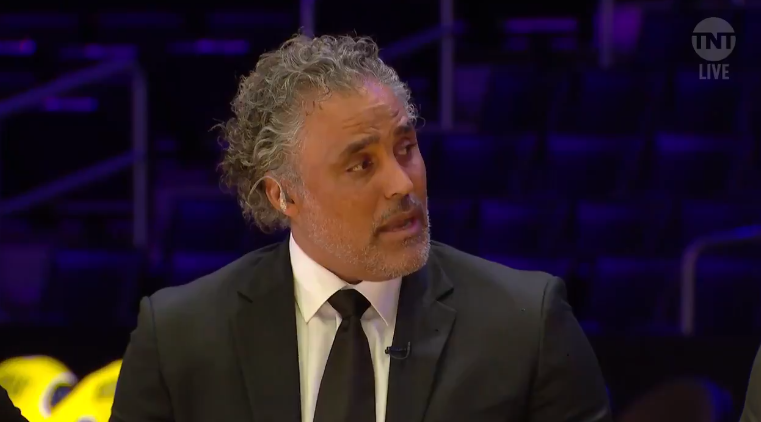 A helicopter crash took the lives of NBA legend Kobe Bryant, his daughter Gianna, and seven other people on Sunday in California. In the hours after the news that Bryant was on the helicopter and there were no survivors, not much was known about the identities of the other passengers (and initially it was reported that there were only five people on the helicopter).

And at one point, rumors surfaced on social media that former NBA player Rick Fox — a teammate of Bryant on three Los Angeles Lakers championship teams — was also on the helicopter. That was proven to be false within a few hours, but not before it surely caused plenty of panic for Fox’s friends and loved ones.

On Tuesday night, TNT’s Inside the NBA paid tribute to Kobe Bryant at Staples Center, and Fox appeared on the postgame version of the program following the Celtics-Heat game (the postponed Lakers-Clippers game was originally scheduled to be part of the coverage).

Fox explained the shock he had when learning of Bryant’s death, and how he just wanted to spend time with his kids, when his phone “just started going off.”

Fox said that his best friend, Monmouth head coach King Rice, kept calling. He assumed the phone calls were about Bryant, and he finally called Rice back. After Fox finally answered, Rice began bawling and said, “You’re alive.” That’s when he learned of the rumor, and he kept getting concerned calls from his mother, brother, and sister.

I was talking with my kids just trying to spend the time with them, and then the phone just started going off. I’m thinking to myself, everybody wants to talk about Kobe. And I right now want to be with my kids and my family.

Then all of a sudden, my best friend, King Rice, who’s a basketball coach… he walked off the court at Iona and somebody apparently told him that I may have been on the helicopter. And he started calling. So I’m seeing King’s number repeatedly going and going and going. I think he’s worried about me, so I said I’m gonna talk to my best friend.

I answered, and I said, “Hey man, this is crazy about Kobe.” And he just was bawling. And I started crying.

And it was in that moment that my phone just started going. And my mom, and my sister, and my brother.

And, so, look, this has been a lot to process for all of us, quite frankly. We’re blessed to have had the time we had with Kobe. A city is a mourning, a family is mourning, we’re all mourning.

I’m glad that’s over with, but it was hard to deal with, because it shook a lot of people in my life.

Kenny Smith got very emotional as he explained the moment he found out that Fox was safe.

Kenny Smith get extremely emotional while telling story of when he found out Rick Fox was still alive despite reports at the time saying he was dead. pic.twitter.com/lfQWoC2sim

And Shaquille O’Neal told Fox, “I’m glad you’re alright, but the next time I call you and you don’t call me back, I’m gonna put these hands on you.”

Shaq to Rick Fox 'I'm glad you're alright, but next time I call you and you don't call me back imma put these hands on you" pic.twitter.com/YYAX5Y2sjy