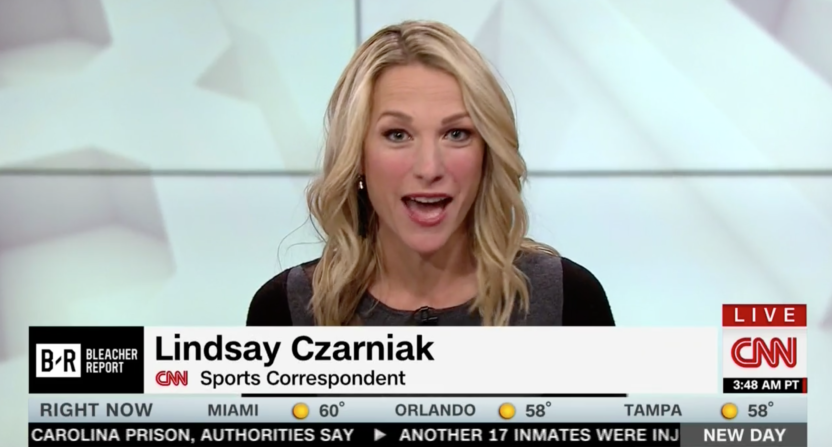 If you have tuned into CNN’s morning television lineup over the past few days, you may have spotted a familiar face in a somewhat surprising place: Lindsay Czarniak, the longtime ESPN anchor who left the network last August, on the set of Early Start and New Day.

Czarniak announced last Thursday that she would join CNN “for a few weeks,” working with the network’s sports team. In declaring the news, she posted a side-by-side of a current headshot along with one from when she began her career at CNN 18 years ago.

Stumbled upon this #TBThursday gem that was still in the @CNN system from my 1st day on the job in 2000! I was fresh outta school with a dream to be a journalist and a killer haircut 🙂 18 yrs later I am just as excited to join the CNN sports team for a few weeks starting tmrw pic.twitter.com/WQBoq1M3ia

Czarniak — whose husband, Craig Melvin, is a prominent anchor on NBC News and MSNBC — picked up her first CNN byline Friday morning with an article about the Seahawks postponing Colin Kaepernick’s scheduled workout. Over the past few days, she has appeared on Early Start and New Day in segments that carry Bleacher Report branding (as CNN and B/R, of course, are both owned by Turner).

Here’s a clip from Tuesday morning of Czarniak alongside New Day hosts Chris Cuomo and Alisyn Camerota, discussing the Miami Heat’s victory over the Philadelphia 76ers in Game 2 of their playoff series:

Czarniak worked for ESPN from 2011 through last summer, hosting shows including SportsCenter, SportsNation and NASCAR Now. She left when her contract ended in August, after she and the network failed to agree on a suitable role upon her return from maternity leave (with Jemele Hill and Michael Smith having taken over the 6 p.m. SportsCenter edition she had previously hosted).

Since leaving ESPN, Czarniak has laid fairly low, though she did cover the Super Bowl for NBC4 in Washington D.C. and the Daytona 500 for Joe Gibbs Racing. CNN is certainly her highest profile gig post-ESPN, but it appears to be only temporary, just like the others. We’ll keep an eye on how her time at CNN plays out and whether she eventually settles into another full-time role or keeps bouncing around in these short-term roles.