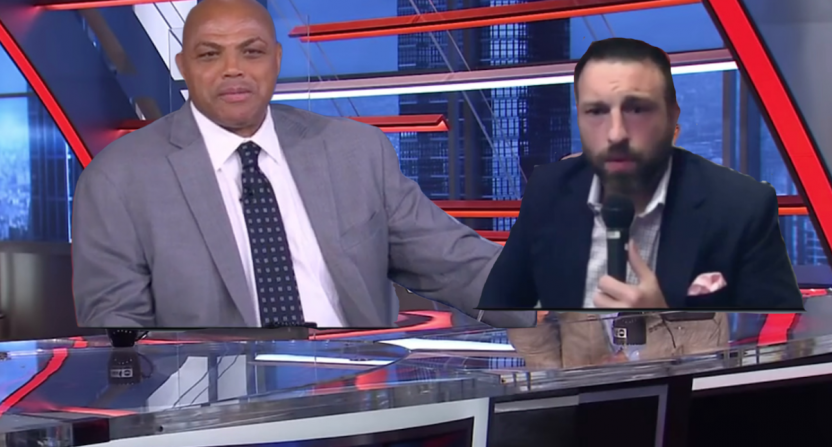 Comedian and drive-time host on Washington D.C.’s 106.7 The Fan Danny Rouhier became a social media sensation last week when he posted an impersonation of Charles Barkley’s halftime analysis of Game 5 in the Nuggets-Blazers NBA playoff series.

To viewers’ delight, Inside the NBA could not sign off on Saturday without acknowledging Rouhier’s hilarious imitation and taking the opportunity to poke fun at Barkley. The show ended the day’s playoff coverage with the clip, further igniting its popularity.

On Twitter, Rouhier said he was finishing dinner with friends when he began hearing that his video played on TNT.

So a follow-up was only natural, right? Rouhier could always post another impersonation of Barkley doing NBA analysis. But what about bringing him on the show to do his imitation with Barkley himself? That’s what Inside the NBA viewers were rewarded with Tuesday night with “Chuck” interviewing Chuck during the show. Check it out:

Kudos to Rouhier as Chuck for a strong interview with Barkley, asking the NBA Hall of Famer hard-hitting questions that fans have surely wanted to ask themselves.

For instance, why does Barkley always brace himself against the desk with his right hand when he’s ready to make a point? Rouhier/Chuck also brought Kenny Smith into the conversation, asking him why he always has a pained expression, looking like he’s about to give a toddler bad news when he’s adding his analysis.

Even better was when Rouhier started to break and Ernie Johnson told him to stay in character. Keep the bit going, Danny!

There may be no more shining moment for a comedian, no better display of comedic courage than when he or she performs an impersonation of someone to the actual person. Think of John Belushi imitating singer Joe Cocker right next to him on stage for Saturday Night Live. Or Jimmy Fallon going face-to-face with Mick Jagger, also on SNL.

Rouhier expressed his gratitude to Inside the NBA‘s producers for inviting him on the show and putting the segment together. As long as the crew is willing to make fun of each other and no one takes himself too seriously, this will continue being the best sports show on TV.

For me, the greatest part was getting to hear the whole crew when they were off air before we went live. It was EXACTLY like you'd imagine. The coolest dudes just BS-ing with each other. Hilarious and perfect. Will discuss today at 2pm on @1067theFan

And as you may have noticed in that last tweet, Rouhier says he’ll talk about the whole experience on Wednesday’s show. You can listen to “Grant & Danny” with Rouhier and Grant Paulsen at 2 p.m. ET on D.C.’s 106.7 The Fan, streaming online, through the Audacy app, or your favorite podcast app.