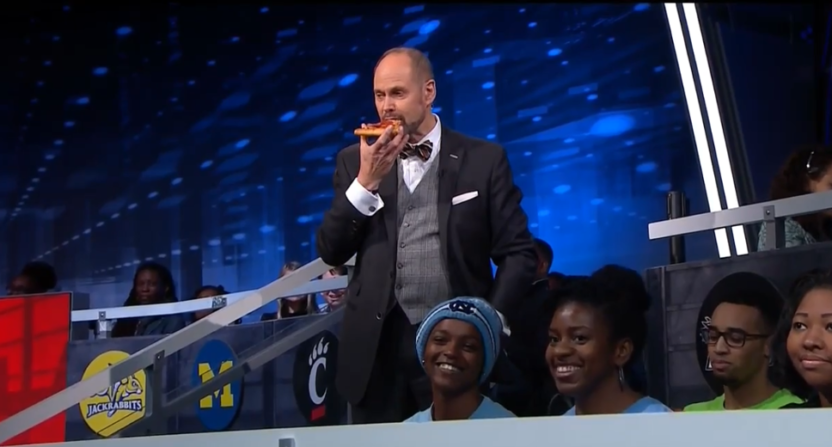 The CBS-Turner NCAA Tournament Selection Show Sunday took criticism for a whole lot of reasons, from teams being revealed alphabetically at first before the bracket to audio/video sync issues. But it also took some flak over another decision; a reasonably-awkward mid-show promotion where co-host Ernie Johnson wandered over to a section of fans (this was filmed before a live studio audience for the first time), discussed how sponsor Pizza Hut had provided them with free pizza, asked for a piece, ate it on camera, and tried to get the crowd excited about the free pizza. Here’s the segment:

And this got blasted:

I guess @TBSNetwork thinks they don’t have enough tournament info to discuss so we get Ernie Johnson eating pizza. #SelectionSunday

Ernie Johnson looked so awkward and uncomfortable doing the live Pizza Hut ad he would rather have been eating spinach.

Ernie Johnson shamelessly plugging Pizza Hut on behalf of the NCAA, while TBS airs commercials that talks about how "student"-athletes earn something much greater than money… Opportunity ?? Give me a break #KitKat

That said, nicely done by the studio audience for not faking enthusiasm when Ernie Johnson wanted them to do so when he was shilling for some chain pizza.

Ernie rearranging the pizza boxes on the Titanic.

While the criticism is well-deserved given how awkwardly that turned out, what happened is perhaps sort of understandable. With an audience, you want the audience to be excited. Free food can help there, and there’s some logic to having a sponsor provide that instead of just buying the food. Mentioning that sponsor’s contributions on-camera isn’t necessarily ridiculous, either, especially later in a two-hour show where you’ve already revealed the teams and the bracket (as promised). And maybe there’s some universe somewhere where this on-camera pizza exchange went a different way and felt fun rather than forced. But it’s not this one.