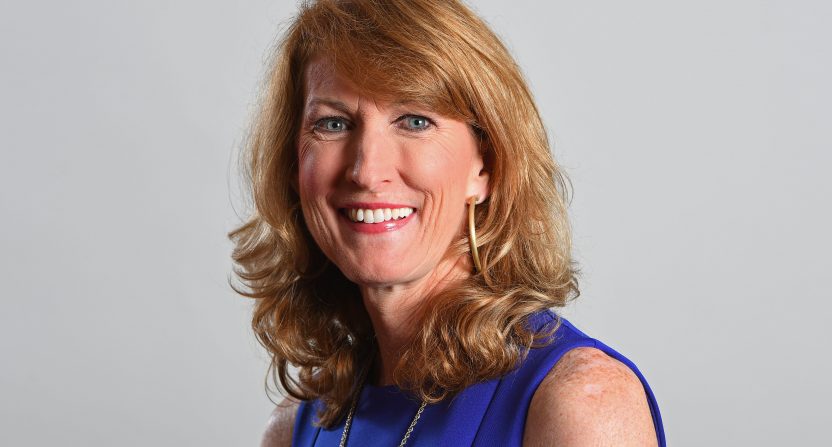 After a long day in Charlotte doing college basketball studio analysis for ESPNU, Debbie Antonelli was making the three-and-a-half hour drive to her home just outside Charleston, S.C. when she got an unexpected call one Wednesday morning from Ross Molloy, CBS’ vice president of talent and production planning.

Molloy said that the people at CBS and Turner were kicking around this idea, and wanted to know if she’d be interesting in working as a game analyst for the first two rounds of the NCAA men’s tournament, becoming the first woman to serve in that capacity since Ann Meyers in 1995.

“I was thrilled, humbled, flattered, excited,” Antonelli told Awful Announcing in a phone interview conducted last week. “I tried to stay on the road, because I was so excited to think that I was in that conversation.”

Antonelli has been a basketball lifer. She’s called men’s and women’s college basketball games for CBS Sports, Fox, ESPN and the SEC Network for over 20 years and WNBA games for the Charlotte Sting and Indiana Fever. She played basketball for three years at North Carolina State for legendary head coach Kay Yow.

“That’s the biggest sporting event that matters to me, the biggest one for me,” Antonelli said of the men’s tournament. “The biggest opportunity for me in my career.”

And to follow in the footsteps of Meyers is also a unique thrill for Antonelli.

Antonelli will call NCAA Tournament games on Thursday and Saturday in Milwaukee alongside play-by-play man Carter Blackburn, analyst Mike Gminski and reporter Lisa Byington. They’ll call Butler-Winthrop, Minnesota-Middle Tennessee State, Purdue-Vermont and Iowa State-Nevada on Thursday with the help of producer Steve McKee and director Jim Cornell. The afternoon session will be broadcast on TNT with the evening games being shown on truTV.

But before Antonelli could officially accept the analyst role— which is relatively groundbreaking in that a women hasn’t analyzed a men’s tourney game in over 20 years— she had to talk to her bosses at ESPN first. Antonelli was scheduled to call the first two rounds of the NCAA women’s tournament for ESPN, which take place between Friday and next Monday.

“The ESPN management team came back with ‘absolutely, we want you to do it. We want you to have that experience,'” Antonelli said. “They were excited for me.”

When she’s done calling men’s games, she’ll go back to the women’s tournament for ESPN, calling the Sweet 16 and Elite Eight from the Lexington regional.

After Antonelli’s role was announced by CBS and Turner on March 2, she said the first people to call her were Blackburn, Gminski and Dan Bonner, another game analyst for the men’s tournament. Antonelli has long histories with all three men. Antonelli was the analyst for Blackburn’s first college basketball game— featuring the University of Texas women— and she worked with both Gminski and Bonner when Fox had the Sunday night ACC men’s package.

“They both told me to not try to prove anything, that I already earned the job,” Antonelli said of Gminski and Bonner. “Do what I do best and be prepared and work hard and just call the game in front of you. Don’t worry about trying to do anything special or unique. Do what you do; that’s why they hired you in the first place.”

As a female public figure with over 13,000 Twitter followers, Antonelli knows that the trolls will be out in full force when she calls her first games, but she said she won’t respond to them and keep her focus where it needs to be.

“If that becomes a big distraction and I’m disruptive to my team, then that’s not gonna be good for the team,” she said.

Antonelli has called four games in a day before for the women’s tourney, so she knows the amount of preparation necessary for the job. She said she plans to do about 80 percent of her prep work before going to Milwaukee on Tuesday or early Wednesday, watching film and getting acclimated with each of the eight teams. She’ll then go to each team’s practice on Thursday and get the rest of her preparation nailed down and ready for her first game at 1:30 eastern.

“It’s a very exciting, comfortable team, and I hope we’ll be a good listen and an educational one,” Antonelli said. “I know we’re going to have a lot of fun, and I hope the viewers will have fun listening to us.”