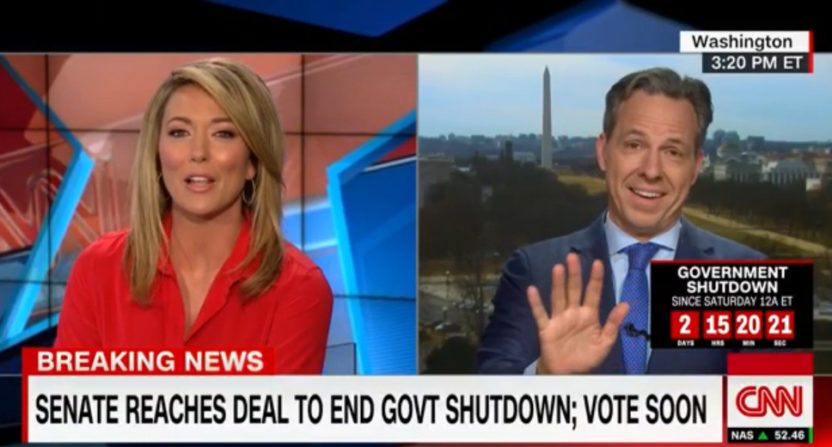 It’s not all that surprising to see news reporters and anchors show some sports fandom, and it’s no secret that CNN’s Jake Tapper is a fan of the Philadelphia Eagles. Heck, the team even invited him and his father to watch Sunday’s NFC championship game.

But what is a bit more unusual is for a prominent journalist like Tapper to call his team’s opponent “a cheating team” on-air, and that’s what happened Monday when Brooke Baldwin asked him about going to the game.

Once we got past politics — I asked @jaketapper the hard hitting question: how was the @Eagles game in his hometown of Philly??? Standby for some shade (ATTN @JohnBerman): https://t.co/ABGNRvXlpM

After Tapper talks about what it meant for him to go to the game with his father, and a discussion about if he’s bad luck for the team and if he’ll go to the Super Bowl, Baldwin says (1:35) she’ll be rooting for the Eagles thanks to the Patriots’ win over her Atlanta Falcons last year, and Tapper responds “The Patriots are cheaters, Brooke. The Patriots cheat. This is just a fact as established by investigations. They’re a cheating team. I’m sorry, I am…”

Baldwin cuts in with “You go tell our friend John Berman (a fellow CNN anchor and a fan of the Patriots) that, good luck with that” and Tapper responds “I mean, the facts speak for themselves, but we’ll let Berman tell himself whatever he wants.”

Of course, This is meant to be a lighter discussion than CNN’s usual fare, and the on-air fandom isn’t all that unusual. However,  Tapper’s specific commentary of “The Patriots cheat. This is just a fact.” has already ruffled some feathers and caused some Patriots’ fans to yell at Tapper and CNN on Twitter. And that’s a pretty bold statement to make considering the tense.

Yes, the Patriots have twice been punished by the NFL for rules violations in Spygate and Deflategate sagas (whether they were fairly punished or not is a debate that will never end, especially once people on both sides start arguing different interpretations of the ideal gas law), so maybe there’s an argument for “cheated” (although that’s still going to be controversial language), but “cheat” suggests they’re still doing it.

Unless Tapper has some upcoming bombshell story that’s going to put Seth Wickersham’s to shame, the evidence for “The Patriots cheat” is not “just a fact.” And Tapper should know to be careful with what’s presented as fact, especially given his prominence in the ongoing fights about “fake news.”

Of course, this all seems like rather a tempest in a teapot. Unless something really unexpected happens, Tapper is not reporting on the Patriots, so worrying about his bias feels a bit much. New England fans may have a bit of a point that it’s a bit unfair to hear “The Patriots are cheaters” on CNN with no rebuttal, but it’s also not like an anchor’s off-the-cuff comments on sports are having a wide effect, especially considering that the rest of the segment’s talking about him cheering for their opponent.

But Tapper probably should have chosen his words more carefully; he could have talked about not liking the Patriots and no one would care, and he could have even referenced Spygate and Deflategate in a less-controversial, less-ongoing fashion and caused less of a stir. We’ll see if this leads to New England fans adding CNN to their list of hated networks.