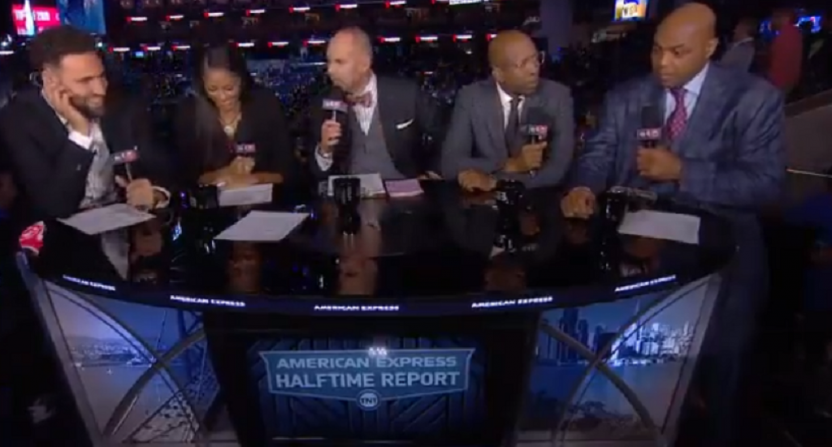 The Golden State Warriors were blown out by the Los Angeles Clippers 141-122 in their season opener on Thursday night in San Francisco. Along with playing in a brand-new arena (Chase Center), the Warriors have nine new players. Steph Curry and Draymond Green remain on the Warriors, but Kevin Durant left for the Brooklyn Nets over the offseason (and likely won’t even play this season due to suffering a ruptured Achilles in the NBA Finals), and Klay Thompson is likely out for the season due to a torn ACL suffered in the NBA Finals.

So, this is a very different Warriors team than the one that’s reached the NBA Finals five straight times, and the expectations are much lower. But Charles Barkley thinks the expectations should be much, much lower, and he was quite honest about it… to Klay Thompson.

Thompson joined Barkley and the Inside the NBA crew on TNT’s set during halftime of Thursday night’s game. And after Thompson said that he thinks Golden State’s window to win a championship is “open for the next five, six years,” Barkley told him that the Warriors’ window is “shut,” and the Warriors won’t even make the playoffs this season.

“Number one, I hope you get back soon, but you’re just wrong..

I think their window’s shut. I don’t think they can score enough.

I was wrong before the game. I said they were going to be the seven or eight seed. They’re not going to make the playoffs. They just can’t score enough.”

Chuck being brutally honest as always.

“Chuck has the right to be a little pessimistic, but I think these young guys are going to step up, man. I did a shooting drill with Jordan Poole yesterday, he smoked me in three out of five spots. Glenn Robinson has plenty of experience in this league. I really like what Marquese (Chriss) is giving us this training camp, we kind of revived him. I think it’s exciting, man. I think we got enough guys to get us there, at least.”

While this Warriors team has a long way to go to be a title contender, not making the playoffs would still be a big disappointment. D’Angelo Russell (averaged 21.1 points and 7.0 assists in Brooklyn last season) should give Golden State a dynamic backcourt with Curry, who should be very motivated to try to return to MVP form with Durant gone and Thompson out. Five Thirty Eight currently has the Warriors projected for a 48-34 record and a 74% chance to make the playoffs.

But the season opener certainly showed how far off the Warriors are from the West’s elite teams at the moment. It also showed how good Kawhi Leonard and the Clippers are (as did the Clippers’ 112-102 season-opening victory vs the Lakers).

As for Chuck, he was full of interesting quotes on the night.

"I mean, Cam Reddish only had one point. He had one point more than a dead man."- Charles Barkley https://t.co/bNlzURS66o