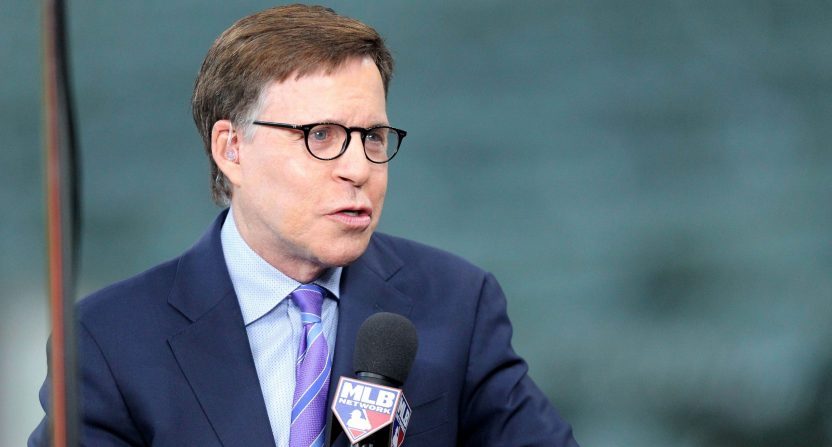 Baseball fans have been listening to Bob Costas this week as he returned to the booth to call some Major League Baseball playoff games for MLB Network. While not everyone in the booth has avoided controversy, Costas has seemingly enjoyed the return to form following a career that’s taken him to just about every major sport, sporting event, and sports interview show out there.

While his career took him many places, calling baseball games always seemed to be one of his broadcasting cornerstones. And Costas will continue covering the sport as studio host for coverage of this year’s National League Championship Series on TBS, starting Oct. 15.

Costas recently stopped by The Adam Schein Podcast as the two Syracuse alums talked about their alma mater, the MLB playoffs, and other major sports news stories of the moment. Towards the end of the interview, Schein asked Costas whether or not calling baseball games still holds a special place with him now that he’s done so many different things in the sports broadcasting world. Costas’ answer ended up offering an insightful self-critique of the 69-year-old and how he compensates for losing “a little velocity on his fastball” as a baseball commentator.

“I don’t know if I’m always as good as I once was, Adam,” said Costas. “I think as you get a little bit older, some of the sharpness, you gotta be really careful. Do I judge the ball off the bat quite as quickly, we’re talking about split seconds now; so that a call has the right rhythm to it. Do I always judge it as well as I did in the 80s and 90s?

“During COVID, when all of us were kind of confined, a lot of stuff popped up on YouTube, or the single-sport networks were showing archival games… In watching some of these games, I could tell that I had a consistently better rhythm. Consistently better anticipation. Maybe it’s 90 percent there now. There’s probably 10 percent where it’s not quite what it used to be. You have to try to figure it out. The way a guy who has lost a little velocity on his fastball has to figure out how to approach this hitter and get this hitter out in a little bit of a different way.”

As for what a great baseball call sounds like, Costas referred to the person widely considered to be the best to do ever do it, as the prime example.

“What I’m hoping for is that a baseball fan who watches this says not only that Bob and Jim Kaat and Buck Showalter made good points, but that it had a certain feel to it, it had a certain rhythm to it… The greatest of the great, Vin Scully, who worked alone essentially. He didn’t just provide lyrics and his lyrics were great. The way he presented it almost had a melody to it. That’s what you aim for. Whether you ever achieve it is another question, but that’s what you are aiming for. That there’s just something, not just accurate, not just competent, but something pleasing about it.”