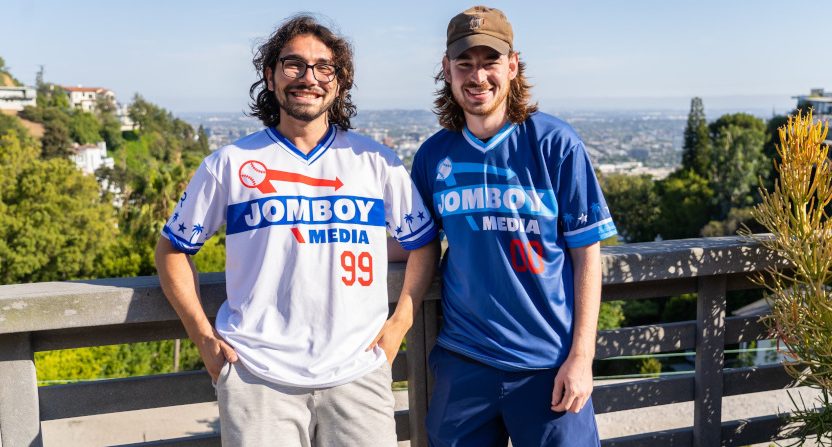 Jomboy Media has made some big splashes recently, including raising another $5 million in May and bringing in former Greenfly and MLB Advanced Media executive Andrew Patterson as CEO in July. And while they’ve done lots of projects with names already known to a traditional baseball audience, including Chris Rose and Ian Happ, they’re also investing in younger content creators with different fanbases.

One example there comes from Jomboy’s signing of  Jack Doyle and Lorenzo DeMalia. DeMalia and Doyle (seen at left and right above respectively around MLB All-Star Week this year) are 21- and 22-year old content creators respectively who have built a large following with their We Got Ice baseball and wiffleball TikTok channel. That channel currently has more than 680,000 followers. Doyle and DeMalia spoke to AA recently, and DeMalia said Jomboy was a great destination for them, as it was an important part of what motivated them to make their own content in the first place.

“We were fans of them. When we started making content, it was sort of inspired by Jomboy; Jack was watching nonstop Jomboy and he showed me, and I started watching it. So it was ‘Oh, we really like what they do, we should make content of our own.’ It’s kind of a direct from inspiration to work, it’s very much correlated.”

Doyle said it was also appealing that Jomboy was a company where they could keep being creative, but with more logistical support.

While Jomboy goes beyond baseball these days, the company started with a show on the Yankees from founder Jimmy O’Brien and partner Jake Storiale, and MLB content has remained a focus even through their growth. DeMalia said that makes it a terrific place for a baseball-focused channel like We Got Ice.

“It’s awesome for ideas, because everybody’s so invested in the sport and knows everything that’s happening. If you’re into baseball, there’s no better place to have those conversations and have those ideas. It’s also cool to have people talk about other things besides baseball, and get into that content route as well. It’s an open environment. But there’s no better place to work if you’re a baseball content creator.”

Doyle said working with people who care so much about baseball is a great fit for them.

“Every employee genuinely loves baseball and most of them genuinely are obsessed with the Yankees. So the stuff you see on camera is one thing, and then off camera, the office is also having those same debates. It’s just a bunch of a baseball fans working at a company that happens to be a baseball company.”

Doyle said baseball is a long-time love of his, and was always going to be what he wanted to create content about.

“Growing up, I always played baseball, I was always obsessed with baseball. Baseball video games, playing baseball, just my whole childhood was baseball. So when I started getting interested in making content, baseball was the only answer. I say all the time it only would have worked if we did baseball, because you have to have some prior knowledge. There’s certain references I’ll make in a video that the audience will only connect to because that did happen to me in t-ball or something like that.”

DeMalia and Doyle met in college at Fitchburg State in Massachusetts, and DeMalia said sports was what they initially connected over.

“We met in math class for dummies, basic math for people who weren’t math students. We met in class and kind of bonded over a mutual love of sports.”

They did a college sports radio show together, then moved into their current content approach. While they use multiple platforms these days, it really started with their TikTok channel, and Doyle said they joined TikTok at the perfect time.

“The timing worked out where the app was really getting hot while we were starting to make content, so we weren’t catching up, we were just hopping on the trend right away. I think how our brains work is really short synapses; we like making 30-second videos rather than an hour videos. So the timing of the actual content lined up.”

DeMalia said TikTok is a great platform for him for its focus on short, snappy content across genres.

“It’s the one app that actually accommodates my ADHD very well. I have a 30-second attention span, I say it all the time. So this is perfect. … “It’s a short attention span, and the algorithm is so good it pushes all sorts of different content to you. So one second you’re watching a video about Jack striking out with a wiffleball, and the next second you’re watching something entirely different that you might have never consumed.”

DeMalia said he thinks TikTok encourages more consumption from creators you don’t already follow than other platforms do.

“I think a big difference with TikTok and Instagram versus YouTube is on YouTube you have to click the video, you have to commit to it, whereas TikTok and all these new apps, they push the video to you. So you get shown the video without committing to it immediately, so it opens your horizons to new content, which helps creators a lot.”

Doyle said TikTok was also a great place to start thanks to its ease of use.

“It’s also such a raw app that makes it easy for anyone to create content. So starting is a lot less daunting, because you don’t have to have a whole team. And now, when we do have a whole team, we can really perfect the way we make TikToks. But at the end of the day, all you needed was a phone.”

We Got Ice is now expanding their focus on some longer content on YouTube, with Doyle saying that will cover both podcasts and longer (but still relatively short) videos than what they were doing on TikTok. DeMalia said having access to the Jomboy production team is vital for them in making that jump.

“I think as we move on from TikTok where you can do it on your phone in your bedroom, now we’re going onto YouTube where we have a fully-produced show with editors and a producer, we have a podcast, we have YouTube videos, it’s just more hands to help and more brains to bounce ideas off of. It’s a whole creator atmosphere; it’s not just the two of us in our bedrooms talking over Zoom, we can come into work and breathe ideas.”

And he said that’s already led to benefits for them.

“I showed up to work today and was like ‘Hey, I have this concept,’ and immediately there’s somebody who can help me take it from idea to execution. It’s like ‘Oh, this is actually possible, we can do this.’ And it’s such a cool concept to have around you.”

He said YouTube is a great way for them to expand what they do as well.

“It’s our next adventure that we’re going to tackle. We’ve done TikTok, we’re still going to continue to do that, and tackle social media, but I, for one, watch YouTube content non-stop, it’s really all I consume, so I really want to start creating that content for people as well. It’s like ‘Hey, I’ve spent five hours watching YouTube videos, I want to make that for other people as well.”

Baseball often faces criticisms around an older audience, but Doyle said he doesn’t think that shows only older people care.

“Our account is kind of living proof that that’s not true. We have a very good demographic, and we have consistently put numbers up with people passionately caring about the game, and even people casually caring about the game. The numbers speak for themselves. It’s not dying, I think it’s growing, it’s just different.”

“I don’t think baseball has a product issue, I think it has a packaging issue. They need creators to help package the game, and that’s what we do, make the game more consumable for people. Because, realistically, 14-year-olds aren’t going to watch every baseball game; who has that kind of time? But they’ll watch 30-second videos of baseball highlights on Twitter or TikTok or whatever platform. And that’s what all the other sports have started doing, and it’s what we try to do for baseball.”