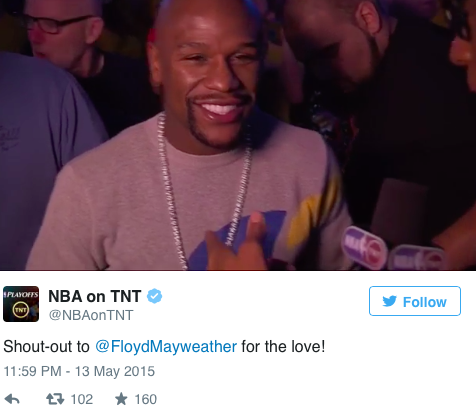 One NBA team already made news during the 2015 playoffs for exercising questionable judgment on its official Twitter account. The Houston Rockets made themselves a part of the news cycle with “the emoji story,” which also included a turn of phrase that struck some readers as conveying rape-flavored language.

Now, another NBA team has invited unwelcome attention with a tweet, but the twist here is that two media outlets followed the Warriors instead of keeping their distance as detached parties.

Wednesday night, Floyd Mayweather — still basking in the glow of his victory over Manny Pacquiao on May 2 — could be found courtside at Oracle Arena in Oakland. Mayweather took in the Golden State Warriors’ win over the Memphis Grizzlies in Game 5 of the NBA Western Conference semifinals.

Shout-out to @FloydMayweather for the love! http://t.co/HZIOETqN7O

The support for Mayweather from both ESPN and TNT accounts is all the more ironic given Mayweather’s camp was embroiled in a credentialing controversy with Rachel Nichols and Michelle Beadle. One wonders what those respective reporters were feeling seeing their networks actively promoting the fighter.