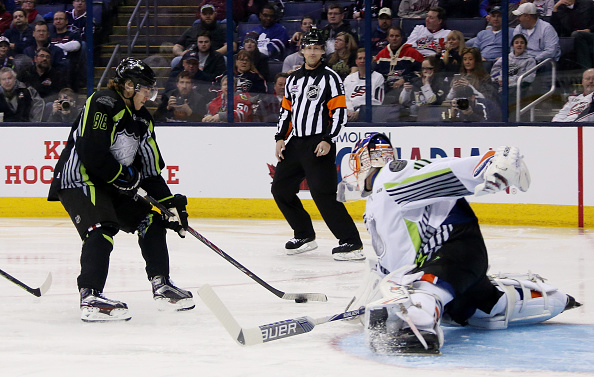 While all the All-Star ratings focus has been on the Pro Bowl’s dip in viewership this year, similar issues plaguing the NHL All-Star Game shouldn’t be ignored.  The NHL’s exhibition took place at a weird timeslot on a late Sunday afternoon at 5 PM on NBCSN (presumably so it didn’t have to compete with the Pro Bowl).

The “game,” if you can call it that, was a little more than a skills competition with the intensity so thick you could cut it with a plastic spork.  I’ve seen more strain and energy exerted ordering off the drive-thru menu at Taco Bell.  And even though it was the highest scoring ASG in history (Team Toews beat Team Foligno 17-12 for those of you scoring at home), the goals didn’t equal viewers.

The NHL All-Star Game was down 14% from the last contest in 2012 (the NHL missed two years thanks to the lockout and Winter Olympics) and scored just 1.19 million viewers.  The skills competition and fantasy draft were down 15% and 24% respectively.  It did not stack up well against its competition.

on NBCSN NHL All Star Game did a 0.9 overnight rating. Skills Comp on Sat did a 0.7. Well below Figure Skating Championship on NBC…

While the All-Star weekend was a big success on the ground in Columbus, the NHL and other sports have to do something to make these games watchable on television or else they will continue to bleed viewers.

How to fix it?  Turn the weekend into a celebration for hockey and have some fun, do all the festivities you’d like, but don’t bother playing a game that doesn’t even look like hockey because fans won’t bother watching.