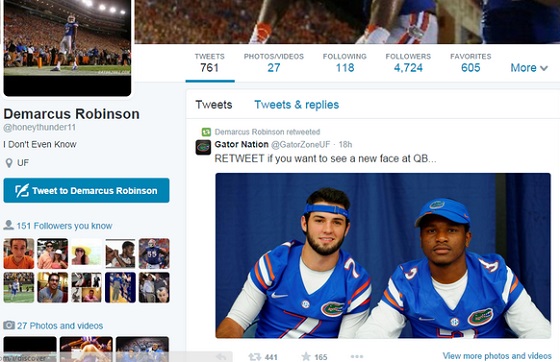 Florida has had a tough time so far this season. After its 42-21 loss to Alabama Saturday, the doubts about the team got even stronger. Fans have been voicing their opinions about firing the coach, replacing the quarterback, and even wanting to switch Florida to the ACC.

Ok the third one isn’t true but Gator fans aren’t happy. And neither is Florida receiver DeMarcus Robinson who retweeted a tweet saying “RT if you want to see a new face at QB.”

Of course he quickly un-retweeted it and haphazardly atoned for it by saying he loves everybody.

I believe in each and every last one of our QB's ! #BeatTennessee

Maybe it’s just the frustration of only catching two passes for 14 yards Saturday, though, it’s strange that Robinson would sell out starting quarterback Jeff Driskel after a bad game when the receiver caught 15 passes from Driskel for 216 yards the week prior against Kentucky.