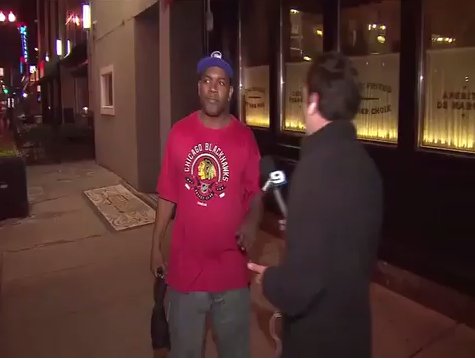 You never know what you’re going to get when you interview fans live on camera after a win, but WGN-TV’s Marcus Leshock got quite the response from one Chicago Blackhawks’ fan following the team’s Stanley Cup win Monday night. Here’s the video:

Leshock asks a generic “How about that? How you feeling today?” question (which is probably all you want a reporter to do here), but he gets a great response. “You know how awesome the ‘Hawks are? This is going to sound messed up, but it’s true. They’ve got black people loving hockey. Ain’t that something?”

The whole race-and-hockey debate is a complicated one, with Colin Cowherd claiming last year that “African-American men do not watch hockey,” which is sort of supported by numbers suggesting just three per cent of the NHL’s audience (in 2012-13) was black. There are black hockey fans (and players) out there, but the overriding perception is still of hockey as a very white sport, and past U.S. audience demographics seem to somewhat support that. However, that seems to be changing for both players and fans, and Chicago seems to be at the centre of that change; Shannon Ryan of The Chicago Tribune wrote an excellent piece last week citing numbers that suggest hockey’s black audience is growing dramatically, and its black audience in Chicago in particular is on the rise. You wouldn’t expect to see that issue addressed in a post-Stanley Cup man-on-the-street interview, but here we are. Ain’t that something indeed.