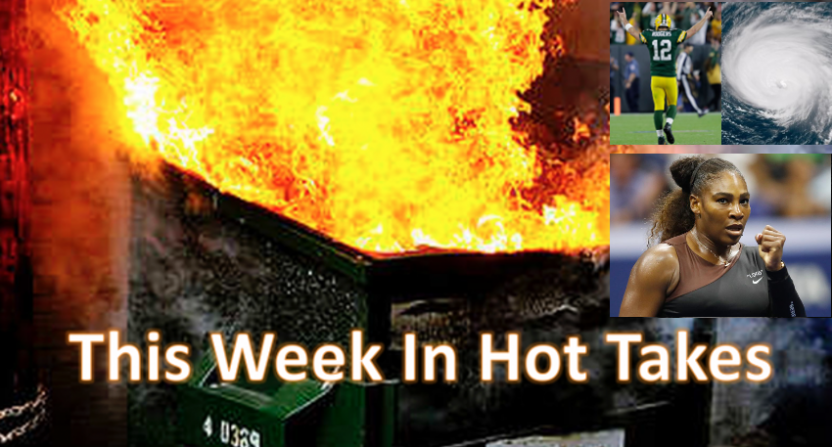 Welcome to another edition of This Week In Hot Takes. This time, we’re looking at the hottest sports takes from Sept. 7-13.

5. Mike Wilbon says “all the people voting for the Cy Young should be dismissed”, calls metrics “garbage”: ESPN’s Wilbon frequently proves just how out of touch he is with modern ways of looking at sports, and, boy, did he do that this week. On Pardon The Interruption, Wilbon and Tony Kornheiser discussed if Mets’ pitcher Jacob deGrom could win the NL Cy Young without a winning record. This segment started with Kornheiser looking like he was going to be the one to drop the hot take, especially when it came to evaluating Aaron Nola and Max Scherzer based on head-to-head record, but then he made the very reasonable point that deGrom has a far better ERA (not the fanciest metric in the world, and one with its own problems, but one with a long history and one that’s closer to actual evaluation of pitchers than win-loss records) than the other two. And that set Wilbon off:

“If (deGrom) goes 8-11 and wins the Cy Young, then all the people voting for the Cy Young should be dismissed” – @RealMikeWilbon

“If you sit there and give me metrics, I should just stage a walkout of this show. Garbage! Because if he goes 8-11 and he wins the Cy Young, all the people voting for the Cy Young should be dismissed and they should bring a new panel in and let them vote. Because any body, anything, any body of voters that decides there’s something more important than winning and pins it on numbers, they’re an embarrassment. You can join them if you want.”

Well, congratulations on that 1960s-level baseball analysis, Mike. Why do you have a national platform again?

4. Skip Bayless tries to devalue Aaron Rodgers’ comeback win because it was “against Mitchell Trubisky”: On Monday, most of the sports world was impressed with the way Green Bay Packers’ quarterback Aaron Rodgers returned from injury to lead his team to a comeback win against the Chicago Bears, who were up 17-0 at halftime. But most of the world is not FS1 hot take artist Bayless, always looking for something to criticize particular athletes over. In this case, he said the comeback wasn’t impressive…because it came “against Mitchell Trubisky”?

Nice comeback by Aaron Rodgers … against Mitchell Trubisky. Not exactly Tom Brady coming back from 28-3 on the Falcons in the Super Bowl. Obviously Rodgers is no Brady and will never be. He's LeBron to MJ.

Nice way to work in a shot at LeBron there, Skippy. But can we note that Rodgers was playing against the Bears’ defense, not Trubisky? (Yes, the comeback happened because the Bears’ offense stalled too, but that doesn’t really have much to do with Rodgers’ play.) And yes, this wasn’t the Super Bowl in stakes and it was a smaller deficit, but there weren’t exactly a ton of people making that particular comparison until Bayless did. Can’t we just enjoy great performances for what they are?

Also, all this logic could be applied to Bayless himself: “Nice comeback from Skip Bayless…on a FS1 show that gets next to no ratings. Not exactly Stephen. A Smith coming back from utter obscurity to co-host First Take, preside over its move to ESPN, and daily destroy Bayless in the ratings. Bayless is no Smith and will never be.” (This is not an endorsement of Stephen A. or of First Take, and one of the biggest factors in the ratings gap between the two shows is just that more people are in the habit of watching ESPN than FS1, but it should be pointed out that for someone who’s all about constant competition and comparisons when it comes to takes on athletes, Bayless doesn’t look great when that approach is used on him.)

Hate these games being cancelled due to hurricane. Couldn’t they have waited another day or two to see what the impact of hurricane is… if any at all??

Kanell went on to add that he grew up in (and still lives in) Florida and is used to hurricanes altering their path and doing less damage than predicted, and fair enough, but that’s completely ignoring a lot of the other issues at play here. For one, many of the areas in question are evacuation zones, with some of the universities shut down altogether and significant accommodation and supply shortages; bringing other teams into those areas is stupid, to say nothing of bringing more fans in.

Beyond that, even if the hurricane never made landfall (which it already has), there are still massive demands on police, fire and other emergency services around the storm; trying to pull them away for a college football game is highly problematic, and there are questions about if more of the games should be cancelled to free up resources. Also, cancelling games as early as possible allows for emergency services to figure out the impact on their staffing. And then there are the chances of the hurricane actually doing major damage to the areas in question. It all adds up to a not-great take, and Kanell got rightly roasted for it on Twitter:

Proof that Danny Kanell doesn’t understand the impact hurricanes have on local and state resources. https://t.co/HrMdiQauJM

As the Marines evacuate Parris Island, Danny Kanell wonders if someone was just a tad hasty rescheduling that BC-Wake Forest game https://t.co/DR8NVRre2N

2. Marc Berman writes “Serena acted like a sore loser”: This week’s hot New York Post take isn’t from Phil Mushnick, but rather Marc Berman. After Serena Williams’ controversial U.S. Open final loss last Saturday, which saw her receiving point and game penalties rarely handed out on the men’s side and creating a whole discussion about tennis umpires (including a Washington Post op-ed in support of Williams from Billie Jean King, pointing out the sexism that seems to still appear in tennis). But rather than have that discussion, Berman decided to toss out a lot of hot takes on Williams in a “Serena acted like a sore loser” column about the match:

They came to Queens to see Serena Williams make history. Instead, they saw Serena lose her mind again at the U.S. Open — a flashback to her pre-motherhood days.

…The only thing Williams broke Saturday was her racket, then she broke down on the court in epic fashion. With a history of sore-losing behavior, Serena lit up the chair umpire after a second code violation for smashing her racket that cost her a point to start the sixth game of the second set.

…Williams was going to lose anyway — the final tally was 6-2, 6-4 — but this display on the 50th anniversary of the U.S. Open was a shame. This was not behavior befitting of a role-model mother — her talk of fighting for women’s rights in the post-match press conference hitting the wrong note.

…Osaka has learned so much from Serena, but she should never try to emulate this side of the tennis legend. Osaka was absolutely terrific and it shouldn’t be lost in Serena’s historic meltdown.

Congrats on missing the point, Marc.

1. Dan Shaughnessy writes that his niece said Serena penalties were fair, while the Herald Sun runs and then defends Mark Knight’s racist cartoon: Berman’s take on Serena wasn’t the hottest one out there this week, though. For that, we have a pair of five-alarmers, starting with Boston Globe columnist (and regular presence in these pages) Dan Shaughnessy deciding that the penalties applied to Williams were completely reasonable…because his niece said so.

.@Dan_Shaughnessy: My niece who played on the WTA Tour says Serena Williams was not mistreated https://t.co/Zov9FQ4old

One person saying something does not make it true, even if they were also an athlete in the same sport. And, you know, Billie Jean King (and many of the others who have pointed out the inequality here, including men’s players like James Blake and Andy Roddick) played too. But yeah, the debate’s all solved because Dan called up his niece. At least he didn’t run and then defend a horribly racist cartoon, though, which is what the Australian (Melbourne) Herald Sun did with a Mark Knight cartoon:

EDITORIAL | The world has officially gone mad when a celebrated cartoonist is condemned by the social media hordes for depicting a famous sports star throwing an unedifying tantrum.https://t.co/cqIAoq9DLq

There are going to be a whole lot of problems when you draw a black athlete in a style similar to a gorilla. And it’s also great that Knight managed to turn Osaka (who has Haitian and Japanese parents, and has mostly dark hair) into a generic white blonde. But yeah, “the world has officially gone mad” for criticizing that. Right.

Rating: 🔥🔥🔥🔥🔥 for Shaughnessy, Knight, and the Herald Sun