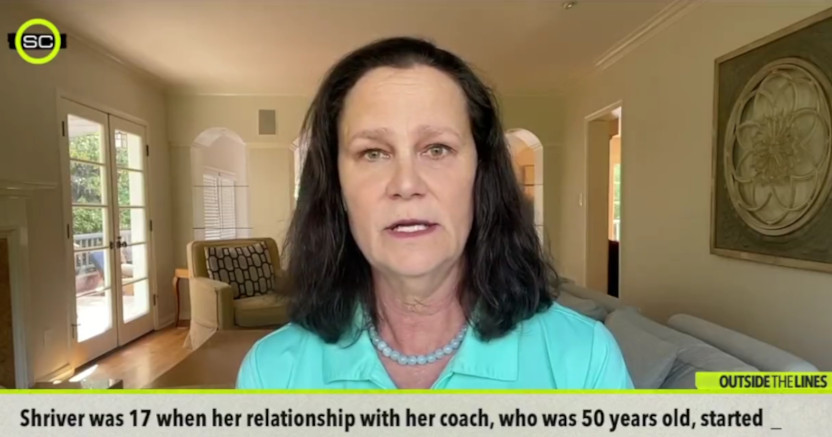 The sports world has recently seen a lot of discussion of inappropriate to illegal sexual behavior from coaches, including the criminal sexual assault convictions against former Chicago Blackhawks’ goalie coach Brad Aldrich and former Vancouver Whitecaps’ women’s coach and Canada Soccer youth coach Bob Birarda, the sexual assault allegations against figures like former U.S. Snowboard coach Peter Foley, and the inappropriate sexual relationships coaches like NWSL figure Paul Riley have had with players under their authority. In that last category, long-time tennis broadcaster Pam Shriver (who’s in the International Tennis Hall of Fame for her success as a player, and has worked for ESPN, ABC, CBS, Tennis Channel, the BBC, and more as a broadcaster since her 1996 retirement) spoke out Wednesday about the relationship she had with her coach Don Candy (who passed away in 2020), which began in 1979 when she was 17 and he was 50. Shriver wrote a first-person piece about this for The Telegraph, and also appeared on ESPN’s Outside The Lines to discuss her story:

"It hurt my tennis, my performance… my ability to form healthy relationships"@PHShriver shares her story on the inappropriate and damaging relationship she had with her first coach when she was a teenager, and why she decided to come forward with it now. pic.twitter.com/g9CpeU0pzV

In that Telegraph piece, Shriver writes that pandemic-led cuts to her work schedule last year gave her time to see a therapist and address this history, and she’s now going public with her story to try and raise awareness of problematic coach-athlete relationships and protect others:

The short version of this story is that I had an inappropriate and damaging relationship with my much older coach, which began when I was 17 and lasted a little over five years. I’ve set out the details of my painful and emotional journey below. It hasn’t been easy to rake over what happened, but I believe this is an important issue, and one that needs to be brought out into the open.

My main motivation is to let people know this still goes on – a lot. I believe abusive coaching relationships are alarmingly common in sport as a whole. My particular expertise, though, is in tennis, where I have witnessed dozens of instances in my four-and-a-bit decades as a player and commentator. Every time I hear about a player who is dating their coach, or I see a male physio working on a female body in the gym, it sets my alarm bells ringing.

It’s not only women who suffer from abusive coaching relationships, but they make up the majority. Sometimes it’s young girls and much older men. Sometimes the ages are similar, and you could argue that two consenting adults are entitled to do what they want. But mixing your personal and professional lives creates all sorts of extra tensions, especially in the pressurised world of sport.

A notable part of that piece comes from Shriver saying she instigated this becoming a relationship, and she’s only recently realized Candy’s own responsibility in letting it happen, but it still led to incredible trauma for her:

If Don had been better informed, he might have been cannier about the potential complications that come with coaching an adolescent girl. Clearly, he wasn’t a predator. When I spoke up in the rental car, he didn’t know what to do. But he had this great prospect, a US Open runner-up at 16, and he didn’t want to let me go.

I still have conflicted feelings about Don. Yes, he and I became involved in a long and inappropriate affair. Yes, he was cheating on his wife. But there was a lot about him that was honest and authentic. And I loved him. Even so, he was the grown-up here. He should have been the trustworthy adult. In a different world, he would have found a way to keep things professional. Only after therapy did I start to feel a little less responsible. Now, at last, I’ve come to realise that what happened is on him.

My relationship with Don was a traumatic experience for me. The after-effects lasted far beyond the time we spent together. Our affair shaped my whole experience of romantic life. It stunted my ability to form normal relationships and set certain patterns which would recur: my ongoing attraction to older men and my difficulties in understanding how to maintain healthy boundaries.

And that also shows why Shriver coming forward about this may be important for current players. This story’s significantly different from the criminal cases around Aldrich and Birarda, and the athlete involved played a larger role in instigating the relationship than in many other situations, but this coach-player relationship still wound up being devastating for her. OTL’s Jeremy Schaap tweeted before the show about the importance of Shriver discussing this:

Pam is our guest on today's edition of @OTLonESPN, at 140 PM ET on @SportsCenter…

This is an important story–and Pam–a terrific person and colleague, and the consummate professional–is hoping that by sharing it she will help others. https://t.co/GcB1YBAW9h

It’s certainly notable to hear and read what Shriver has to say about her experience here, and about how that affected her later in life. And her comments are worth reading and considering for a lot of young athletes.