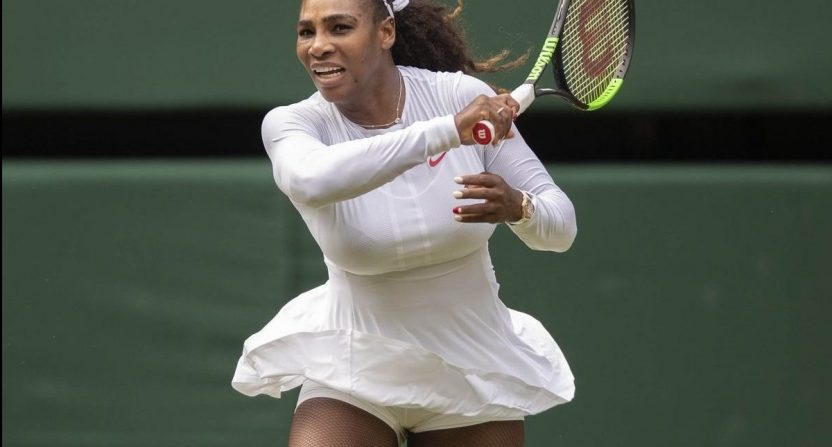 Serena Williams has been absolutely dominant at Wimbledon so far as she seeks her eighth grass-court grand slam victory, advancing today with a straight-sets win over Evgeniya Rodina. Serena hasn’t dropped a set at the All England Club in what essentially marks her return to grand slam tennis, at least at full health; she withdrew from the French Open with an injury after winning her first three matches.

Maybe it’s the smooth sailing on the court that has helped open the door to off-court narratives, but regardless of the root cause, they’ve popped up all over. First there was a well-reported and illuminating New York Times on how female players are addressed piece from last week at Wimbledon by their married names, as opposed to male players.

The tournament’s insistence on recording the marital status of its female participants reflects its complicated relationship with the women who play here — or, rather, the “ladies,” according to the language of Wimbledon.

In keeping with tradition, as Wimbledon is wont to do, the chair umpire followed the seven-time Wimbledon champion’s final triumphant point with the proclamation, “Game, set and match, Mrs. Williams.” She beat Viktoriya Tomova (that’s Miss Tomova, to the chair umpire), 6-1, 6-4.

About 90 minutes earlier, when Roger Federer, a married father of four who preceded Williams on Centre Court, won his match, the chair umpire said, “Game, set and match, Federer.” On the champions board, he is simply “R. Federer.”

That could have been written about any married woman playing, of course, though the fact that Serena kept her own last name does add a bit to the story. But it was about Serena, because she’s the biggest name in the sport, which means that along with making the story more interesting to a wider audience, any thoughts she has on something carry a lot of weight.

Just when that topic was fading from the news cycle, another mini-controversy sprang up, as The Globe and Mail went with a poor headline choice for an Associated Press story previewing Serena’s match against Rodina:

Serena Williams to play Evgeniya Rodina in battle of the moms at Wimbledon https://t.co/JAakZrkFv0 @Globe_Sports pic.twitter.com/3YHtO8E6rZ

“Battle of the moms”, obviously, is not the wisest headline choice, because it implies the fact that both women have kids is the most newsworthy, compelling fact to focus on, instead of, you know, tennis. Roger Federer and Novak Djokovic are both married with kids, but if they end up facing off you probably won’t learn that from any headline.

But while The Globe and Mail certainly couldn’t have picked a clunkier headline, the piece itself, from AP writer Howard Fendrich, gets to the point quickly: it’s more notable that two women with kids are facing off at Wimbledon because until recently that didn’t really happen.

There were a half-dozen mothers in the singles main draw at the All England Club this year: 23-time Grand Slam champion Williams; another former No. 1 and two-time major champ, Victoria Azarenka; Rodina, Kateryna Bondarenko, Tatjana Maria and Vera Zvonareva.

“At different points, we’ve had one or two mothers at a time. And then it’s grown to three or four mothers. And now we’ve seen that we have more, at present, than we’ve had in the past. There was Margaret Court. Evonne Goolagong. (Kim) Clijsters,” said Kathleen Stroia, WTA Senior VP for sport sciences and medicine, naming mothers who won Grand Slam titles.

“The difference,” she said, “is that now it’s certainly something that is becoming common.”

So while it’s unfortunate to imply that the parenting angle is the most important element of a match, it’s meant to highlight the fact that men have been able to have kids and keep playing for as long as sports have been around. That’s why it’s newsworthy, and it’s a trend that hopefully continues; women should obviously be able to have children and return to playing as quickly as they like.

This weekend, Serena herself demonstrated what a lightning rod she is when she tweeted this:

She took her first steps… I was training and missed it. I cried.

That’s a very honest example of the sacrifices parents make to provide for their kids and to continue their own careers and lives, and while most of the replies were kind and supportive, that tweet also became worldwide news. But that tweet and the matchup against another mom also led in part to this interview after Serena’s win today, which got awkward quickly:

That was Serena attempting to shout-out stay-at-home moms while acknowledging how hard she has to work as well, only to be interrupted by a man making sure that stay-at-home dads get a mention too. Which Serena obliged, because she clearly wasn’t slighting men by praising women, a concept some men struggle with. It’s also a lot to ask Serena to do; win a match, come off the court, and give off-the-cuff remarks on the state of working women and motherhood.

So far this Wimbledon has been much more a referendum on the latter for Serena, which is kind of a shame as the tennis has been really damn good. Fortunately Serena has been as adept off the court as she has been on it.