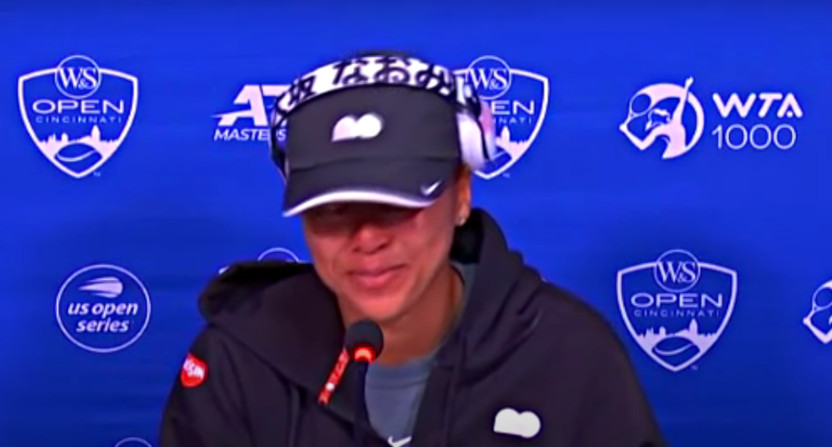 There’s been a lot of discussion over the past few months about tennis player Naomi Osaka and the media. Osaka said in May ahead of the French Open that she wouldn’t talk to media during the tournament, saying “I’ve often felt that people have no regard for athletes’ mental health and this rings true whenever I see a press conference or partake in one.” The four Grand Slam tournaments then issued a joint statement threatening Osaka with disqualification and suspension if she refused to talk to media, and she then withdrew from the French Open.

Now, following the Olympics (where Osaka lit the cauldron at the Opening Ceremonies, but lost early in the tournament), she’s competing in the WTA Western and Southern Open in Cincinnati (where she’s already pledged to donate her tournament winnings to earthquake relief in Haiti), and a question from a reporter from The Cincinnati Enquirer at a press session Monday prompted her to break out in tears, briefly leave the session, and then return. Here’s video of that via Paul Martin on YouTube, starting around 1:23 (the reporter’s initial question isn’t shown, but Osaka’s response there is, and the reporter then repeats and restates his question):

The reporter says “The question was ‘You’re not especially fond of dealing with the media, especially in this format. You have suggested there are better ways to do it and I’d like to try to explore that.’ My question, I guess, was ‘You also have outside interests beyond tennis that are served by having a platform that the media presents to you.’ My question is ‘How do you think you might be best able to balance the two?'”

Osaka responds “I think for me, this is something that I feel, I can’t really speak for everybody, I can only speak for myself. But ever since I was younger, I’ve had a lot of media interest on me, and I think it’s because of my background [Osaka is of Japanese-Haitian heritage] as well as how I play. In the first place, I’m a tennis player, that’s why a lot of people are interested in me. I would say in that regard I’m quite different from a lot of people, and I can’t really…there are some things that I tweet or some things that I say that kind of create a lot of news articles and things like that. And I know that because I’ve won a couple Grand Slams and gotten to do a lot of press conferences, these things happen. But I would also say I’m not really sure how to balance the two, I’m figuring it out as you are, I would say.”

After the press conference, Osaka’s agent Stuart Duguid condemned that line of questioning in a statement to Reuters’ Rory Carroll and Amy Tennery:

“The bully at the Cincinnati Enquirer is the epitome of why player/media relations are so fraught right now,” said Duguid.

“Everyone on that Zoom will agree that his tone was all wrong and his sole purpose was to intimidate. Really appalling behavior,” he said.

“And this insinuation that Naomi owes her off court success to the media is a myth – don’t be so self-indulgent.”

There are a lot of different elements at play here. For one, it seems apparent that answering questions at a press conference is fraught for Osaka, and that those conferences are fraught for her a way that they aren’t for many coaches and athletes. The months leading up to this, and her withdrawal from the French Open over press commitments, suggest that this goes beyond just dislike for particular reporters and particular lines of questioning. Osaka has said that this setting affects her mental health, and there are many things that can trigger stress and anxiety disorders; it’s conceivable that press conferences could be in that group for particular athletes.

For two, Osaka’s agent Duguid is correct that her success is not really about the media, and especially not really about the local media. The idea of sports press conferences dates back more than a century, to a different age when local newspapers played a huge role in the success or failure of various teams, leagues, and tournaments. But the landscape is different today; for many events, the broadcast rights (in this case, Tennis Channel, local RSNs and local networks, plus streaming service WTA TV on the women’s side) matter more. Yes, local paper coverage is still likely important for The Western and Southern Open as a whole, especially for letting locals know this is on and getting them to buy tickets, but it doesn’t really matter to individual and international stars like Osaka.

And it’s hard to imagine that Osaka’s profile would be dramatically hurt if she didn’t do a single further press conference. The articles from those press conferences usually don’t mean much for an individual player, especially when those articles come from local outlets, and Osaka would still likely have plenty of big outlets ready to profile her (or, in Netflix’s case, air a docuseries on her) without these, as long as she kept playing well (and wasn’t banned for skipping press conferences). And it’s hard to say that the media built her to this point, either; sure, media attention helped, but the largest factor in her success is her on-court wins, including four Grand Slam titles. If she had never done a single interview and still put up those results, there still would be a lot of interest in what she did on and off the court.

With that said, though, Duguid’s “bully” comments and attack on this particular reporter seem a bit over the top. Perhaps the first question (which wasn’t recorded in that clip) came off more that way, but the repeated question (which did air on the clip) didn’t seem especially out of the usual in tone or in content from this perspective, and some of this seems to be more about Osaka’s issues with the press conference format in general. However, that’s not how everyone saw it. Here’s a take on it from Ben Rothenberg, the New York Times contributing writer and editor of Racquet magazine.

The topic itself wasn't terrible, but the aggressive tone from an unfamiliar person, after Naomi had already spoken in an earlier answer about how that's what she finds difficult in press conferences, got things going completely awry.

(Naomi had many good moments otherwise!)

Regardless of one’s thoughts on that question and its appropriateness, the idea of the press conference is itself interesting at this point. A press conference theoretically at least provides access for all credentialed media. Yes, there can be restrictions on who gets in, and yes, people from more prominent outlets are often picked for questions. But the press conference remains perhaps more of a level playing field from the media side than one-on-one interviews or interviews outside of competition with stars, which usually go to prominent and/or handpicked outlets and reporters.

There’s some value to that, and there are still some good stories that come out of press conferences, and they’re still at least somewhat valuable to leagues and events (which was the logic behind the Grand Slams’ action against Osaka). But they sure don’t seem that important for individual athletes, especially those who are already established as stars and who already have ways to communicate with viewers and fans with no middleman, particularly on social media. So the value to be gained from a modern press conference appears slanted in favor of reporters rather than athletes, and appears especially slanted in terms of the reporters who wouldn’t normally have access to these players. And that’s perhaps part of Osaka’s issues with the setup.

There’s also the question of just how inherently important participating in media interviews should be to someone’s ability to participate in a sport. At the core, the two are not linked; someone’s play on a field or a court is not related to their ability or desire to talk to the media. But because professional sports are a media enterprise (and especially a television enterprise at this point), the current setup appears to need at least a decent level of overall athlete participation in media interviews.

This doesn’t always apply to every athlete, especially in team sports. Kyrie Irving and Marshawn Lynch are some of those who have chosen skipped appearances and/or non-answers, with Irving getting fined for that tactic but not suspended or anything further. In those sports, there are other players to talk to, something that’s more challenging in individual sports. At any rate, on the broadest level, our current sports setup seems to need a decent amount of overall athlete willingness to engage with the media. And there’s a stronger argument that talking to the media is actually part of the job when it comes to team sports head coaches.

Maybe there’s a middle ground, where press conference exemptions are available with a mental health professional’s endorsement (which might be enough of a hurdle that the exemptions don’t get abused). Or maybe there’s a way to change press conferences so they’re less troubling for athletes like Osaka who have issues with the current setup. But none of that appears all that simple to achieve. At any rate, it makes for an interesting situation to follow, and we’ll see where things go on the tennis press conference front in the days and weeks ahead.