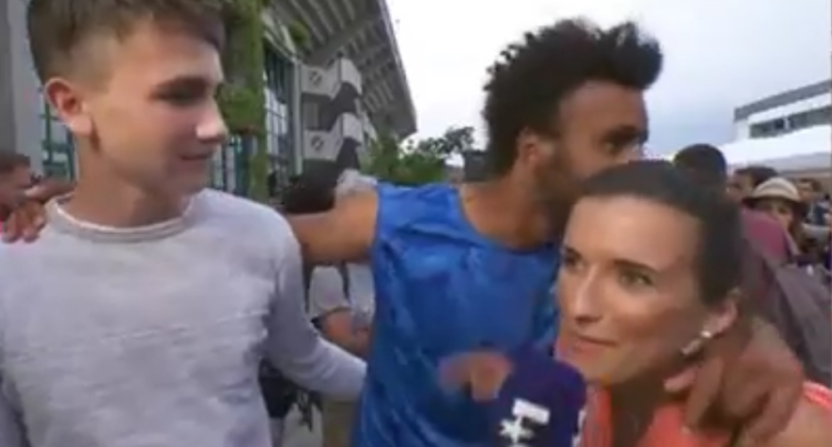 One of the most blatantly inappropriate behaviors from an interviewed player in some time came at tennis’ French Open Monday, where 21-year-old French player Maxime Hamou grabbed Eurosport reporter Maly Thomas while she was trying to interview him and started kissing her head. Hamou was already out of the tournament after losing 6-3, 6-2, 6-4 in the first round to Uruguay’s Pablo Cuevas, but Tuesday saw the French tennis federation announce that his accreditation for the rest of the event was revoked following his “reprehensible behavior.” Here’s video of the incident:

Here’s more on the organizers’ follow-up actions from The New York Post:

Maxime Hamou was banished from the French Open on Tuesday after the French player kissed and cuddled a TV journalist following his first-round exit Monday.

“The management of the tournament has decided to revoke Maxime Hamou’s accreditation following his reprehensible behavior with a journalist yesterday,” the French tennis federation said in a statement.

Maly Thomas of Eurosport was trying to interview Hamou when he put his arm around her shoulder, pulled her close, kissed her temple and nuzzled her neck before she slipped from his grasp.

Thomas spoke to Célia Cazale of The Huffington Post France afterwards and said she would have hit Hamou if she wasn’t live. She also said Hamou’s actions will damage his own reputation, and that these situations shouldn’t be trivialized. There’s no dispute about that; this is one of the worst things we’ve seen from an athlete being interviewed on camera, and it’s something that shouldn’t be tolerated at any level.  Thomas is there trying to do her job, and there’s no excuse for Hamou to grab and touch her this way.

This is only the latest controversial behavior from Hamou, ranked 287th in the world, who took exception to journalists’ questions last week after qualifying for the tournament and pushed his way out of an interview. He also asked the chair umpire “why are you here” during a match:

And during his post-match press conference following his loss to Cuevas, before his run-in with Thomas, Hamou ate chips all the way through while answering questions with his mouth full:

None of that’s close to as significant as his unwanted grabbing and kissing of Thomas, of course, but it’s notable that this isn’t the first controversy Hamou has stirred up. It’s good to see the federation step in to sanction him and send a message that this won’t be tolerated. Here’s hoping we don’t have to see this kind of behavior towards a reporter again.