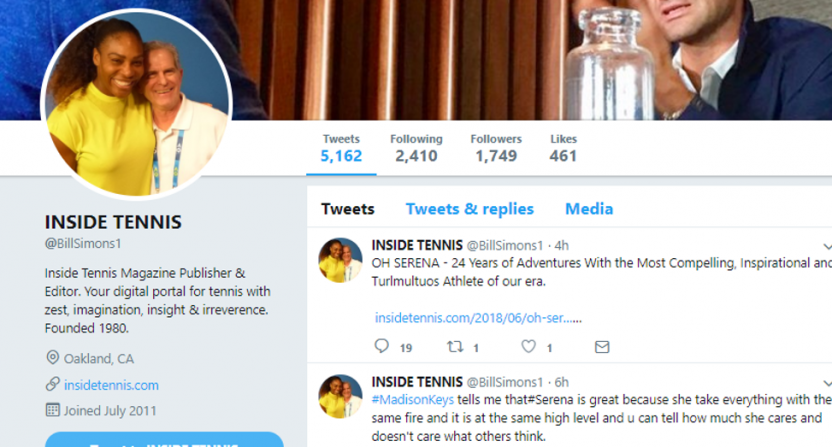 Some good stories take time to develop, but not all long-percolating projects are good. A case in point came from the French Open Saturday, where Serena Williams beat Julia Görges 6-3, 6-4 in the Round of 32 to set up a quarterfinal clash with Maria Sharapova. Afterwards, Bill Simons, the editor and publisher of Inside Tennis, asked just an absolutely terrible question, one he said he’d been sitting on since 2004:

I have never physically cringed as hard as when I read this in Serena’s transcript. Wow. pic.twitter.com/60wnSWG6En

Even with Williams set to face Sharapova next, the premise here is absolutely absurd. Suggesting that a top female athlete would be intimidated by another athlete’s looks is insane and sexist, and repeating someone else’s insane and sexist suggestion to the subject of it isn’t much better than making that suggestion yourself.

And if any proof was needed that there’s no merit to this idea, consider the head-to-head record. Williams beat Sharapova in their first meeting back in 2004, lost the next two (including the aforementioned Wimbledon match), but has won the most recent 18 clashes between the two. So she’s definitely intimidated, all right. Williams handled this stupidity well, but Simons deserves a whole lot of criticism for this. And he’s lucky that she didn’t just exit the press conference after that, the way LeBron James did the other night. If anyone deserves a “Be better tomorrow,” Simons certainly does.

Simons wrote himself that Trump’s comments were “perhaps one of the most absurd tennis analyses I’ve ever heard,” so it’s unclear why he thought those were worth bringing up to Williams 14 years later. That’s especially true considering, as he notes in that piece, that he’d been regularly covering and talking to Williams throughout the intervening period. (Unrelated, too, but he should maybe learn how to spell “tumultuous”; it’s not “Turlmultuos.”) This is not a good look for any reporter, and it’s more proof that just because you’ve been thinking about something for a long while, that doesn’t mean it’s any good or worth putting out there.