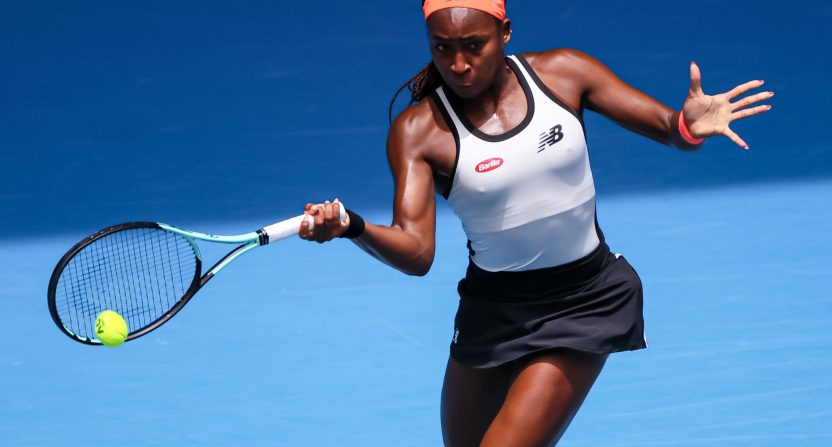 The idea of remote broadcasts with announcers calling games from a studio many miles away has been a notable discussion in sports broadcasting for much of the last decade. It’s an obvious way to cut potential costs, but also one with more clear backlash potential than some other cost-cutting moves. And that discussion became more prominent still when it came to remote broadcasts started as a result of COVID-19 protocols, with some of those remaining remote even after protocols loosened.

An interesting current example of that involves ESPN’s coverage of this year’s Australian Open, which has seen a lot of remote commentary. While COVID protocols prevented ESPN from traveling to Melbourne in recent years, this year it seems to be ESPN’s choice to keep much of their coverage anchored in Bristol. Long-time ESPN tennis host and play-by-play voice Chris Fowler addressed some of that on Twitter Sunday as the tournament got underway.

“To answer all the questions I’m getting, no, I’m not in Melbourne, and, sadly, I’m not headed to Melbourne. But, ESPN’s tennis team will be covering the Australian Open, beginning Sunday night, and for two weeks. The decision was made to call it out of the home office in Connecticut. We’ve actually called it from there the last couple of years out of necessity. We’ll do our best to stay connected to the tournament and to call it from 16 time zones away on the third shift.”

“You’ll hear most of the familiar ESPN tennis team voices throughout the two weeks, especially in week two when the matches get more important. You’ll also hear some less familiar voices. We’ll just take what’s called the world feed, all tournaments have one, ‘Here’s some people calling matches at various hours you maybe don’t know as well.’ But the Aussie Open rolls on, I’ll be up there in Connecticut calling matches with the rest of the team in the wee hours. And as I said, I’ll do the best I can. And I will get back to Australia. 18 years down there, loved every day of it. Someday, some way, maybe as a tourist, but I will get back there.”

That is a remarkable display of presenting the needed corporate line while also showing you might not be fully thrilled with it. And that’s understandable, especially for someone like Fowler who has been going to and calling these events in person for so long. And, in most cases, there isn’t really much of a debate that in-person calls are stronger; the ability to see from your own eyes in addition to monitors and to experience crowd reactions firsthand rather than just through audio feeds has been cited as quite helpful by countless broadcasters throughout this whole process, so the main argument for remote in a loosened-restrictions world is primarily budgetary. It’s not shocking at all that he’d rather be there. But it is interesting to see him talking about not being there, especially with lots of fans upset about that.

The announcers not being there in person is only part of the issue for many fans. Another frequent complaint has been about how much coverage has been put on ESPN OTT streaming service ESPN+.

ESPN burying a major sporting event, the Australian Open, behind a paywall is more extreme this year, with over the air coverage starting later and ending earlier. I get the need to pump streaming, but there has to be a better balance.

ESPN+ coverage of this tournament has been a thing for several years, but its coverage used to be split with ESPN3 (which was also streaming, but required cable/MVPD authentication rather than a separate OTT subscription). Now, it appears much more is on ESPN+, with last May’s announcement of a nine-year Australian Open broadcasting deal extension with Tennis Australia mentioning a wide range of ESPN+-exclusive matches, and this year’s coverage announcement also heavily spotlighting ESPN+ (with every match there) and not ESPN3 (but, at the same time, noting ESPN and ESPN2 linear hours rising from 44 in 2022 to 68 this year, which the network was quick to defend).

Yes, as with any of these streaming service “paywalls,” there’s a discussion to be had around actual accessibility. Linear ESPN channels and ESPN3 come with a not-cheap MVPD requirement and ESPN+ is available outside of that (even at the higher since-August $9.99/month price), and ESPN+ is available for a low fee for those who have a wider Disney bundle with Disney+ and Hulu. But there are still extra costs there for those who have cable and not ESPN+ and there’s extra annoyance for those used to watching on linear or authenticated streaming. Even the 24.3 million ESPN+ subscribers Disney cited in November are well below ESPN’s remaining linear subscribers (around 74 million, as of December). So it is understandable that there are complaints around this, and it’s notable how ESPN commentator Patrick McEnroe addressed that in the first part of a video he posted Wednesday night – like Fowler, from chilly Bristol, Connecticut:

We are now live on @espn 2 from the @AustralianOpen pic.twitter.com/DQrUKuLRW8

McEnroe then goes on to talk about how many of the big names are not at the tournament or have been knocked out, but about the people he’s looking to see step up. But the “It’s always on ESPN+, but you don’t want to hear about that, I know” is perhaps particularly notable as a recognition of these complaints that are out there.

Every event approach from a company comes with tradeoffs, especially in this high-streaming era and especially where it’s been often-discussed that ESPN needs the “flexibility” of ESPN+ components to make rights deals work. Putting more on ESPN+ is better for some (those with that service but not a MVPD), worse for others (those with a MVPD and not ESPN+), and just annoying for many (those with both MVPDs and ESPN+ who are used to and prefer watching events on linear). And that’s definitely a downgrade in potential viewers when it comes to current linear ESPN subscribers versus current ESPN+ subscribers. And it’s certainly fair to see some complaints about that and even to see them acknowledged by on-air talent.

Remote broadcasts are not fully going away any time soon. But there’s absolutely a case for fans to push for in-person calls of prominent games and to criticize remote calls they’re given. Whether that leads to anything will depend on the size of the backlash and how worthwhile it is for networks (in this case, ESPN) to change course as a result, which likely wouldn’t even happen until next year, in this case. And what’s actually worthwhile for ESPN from a dollars-and-cents perspective does matter, especially around increased calls to spin that business off.

Regardless, the fan backlash is still notable. The combination of remote announcers and ESPN+ paywall makes this year’s Australian Open seem as though it’s not a big-time event or a priority for the company. And it’s also interesting to see the likes of Fowler show their disappointment at not being at the first tennis major of the year in person. We’ll see if anything changes there next season.