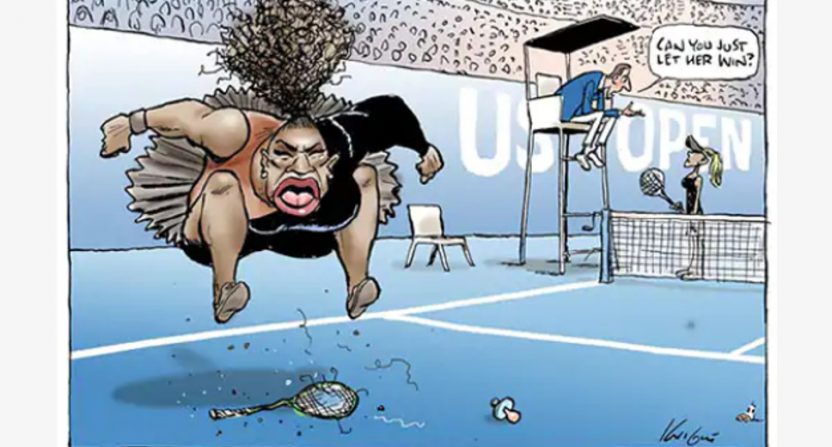 On the weekend where the NFL opened its 2018 season, arguably the biggest story in sports happened in the US Open women’s tennis final. Serena Williams was shockingly penalized a point and a game for code violations by the chair umpire in the second set in one of the most surreal scenes in the history of the sport. Williams went on to lose the final in straight sets to Naomi Osaka, who won her first major.

Williams’ confrontation with the umpire and the harsh penalties given to her opened up a number of debates both inside and outside tennis about Williams’ outburst. Was it really deserved? Did Williams go too far or was she expressing righteous indignation? Was it a sign of inequality because a top men’s player would never receive such a stern penalty?

Unfortunately, given the heated nature of the topic, someone was eventually going to take things way too far. That someone (or something) was the Herald Sun newspaper in Melbourne, Australia. Cartoonist Mark Knight drew this cartoon featuring a caricature of Williams, one which drew plenty of criticisms for its similarities to commonly-used racist stereotypes.

EDITORIAL | The world has officially gone mad when a celebrated cartoonist is condemned by the social media hordes for depicting a famous sports star throwing an unedifying tantrum.https://t.co/cqIAoq9DLq

The cartoon was immediately criticized by many across the world as being racist and everyone from native Australian Ben Simmons and author JK Rowling to Rolling Stone’s Jamil Smith and ESPN’s Keith Olbermann were quick to condemn it.

Well done on reducing one of the greatest sportswomen alive to racist and sexist tropes and turning a second great sportswoman into a faceless prop. https://t.co/YOxVMuTXEC

This is Jim Crow-racist. He Sambo’d Serena Williams. I’m a bit surprised that @Knightcartoons didn’t include a watermelon. For those unfamiliar with the history invoked here, read about the coon caricature. https://t.co/ffmrk76MRM

That’s why he turned her African-Japanese opponent into a white blonde? Because he – and you – are not racist? If he’s your finest, you might as well scrap all your newspapers. He has no place in any dignified (or even self-aware) public discourse. Nor do his defenders. https://t.co/m0NoaoyEs1

In the face of worldwide condemnation, what did the Herald Sun (published by a subsidiary of Rupert Murdoch’s News Corp) do? Why, naturally, they published an editorial defending the cartoon and doubled down on it. You see, it’s everyone else that is clearly the problem here, not themselves.

THE world has officially gone mad when a celebrated cartoonist is condemned by the social media hordes for depicting a famous sports star throwing an unedifying tantrum.

Take a breath and consider the facts.

Serena Williams was warned and then penalised by match umpire Carlos Ramos during the weekend US Open women’s final — including a code violation after her coach was identified giving instruction from the sidelines, a point penalty for smashing her racquet and a game docked for abusing the umpire.

Regardless of race or sex, they are lampooned because of their behaviour.

The Herald Sun pushed back even further by predictably trying to minimize critics as being overly PC and showcasing other cartoons they’ve done.

It’s entirely possible to be critical of Serena Williams’ outburst and hold her accountable for her behavior without debasing her and crossing a line that many around the world found highly offensive. Do you really think 76ers star Ben Simmons is constantly trolling the internet just waiting to be outraged as part of the PC Police?

The paper and cartoonist in question could have easily apologized for any offense caused, admitted that it went too far, and tried to move on after the massive global backlash. (Given the history of the paper and cartoonist though, that may have been unlikely.) Instead, they’ve assured that this controversy continues and this label will be attached to them for a long, long time. Surely there’s enough room in this world between “overly PC” and “a drawing so outrageous that it draws comparisons to the Jim Crow era,” but who knows anymore.