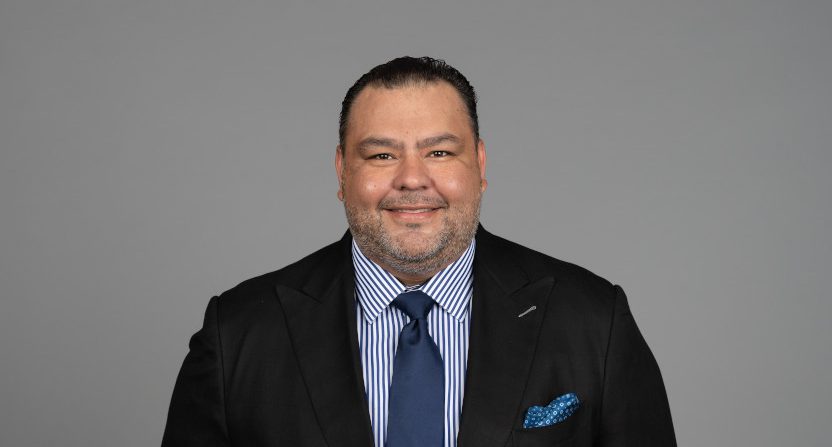 That new role for Cantú includes serving as their new lead analyst for that package, providing in-game, pre-game, and post-game commentary across the 23 games they’ll broadcast this year. He’ll also be working for them on other content like this week’s NFL Draft, which he and the Telemundo team are covering on location. In particular, they’ll have daily recaps on Zona Mixta Saturday and Sunday at 11:30 p.m. ET both days.

The 41-year-old Cantú is an interesting figure. He was born in Monterrey, Mexico, but grew up in Texas, and went to McAllen High School there. He then returned to Mexico to play college football at the Monterrey Institute of Technology and Higher Education, though, and transitioned that into playing for the Berlin Thunder in NFL Europe, helping them win World Bowl XII in 2004. He then signed with the NFL’s Arizona Cardinals and spent three years with them as a player, appearing in his first and only NFL game on January 1, 2006, making him the first player from a Mexican college to play in a NFL game.

Injuries ended Cantú’s playing career early, but he quickly headed into the broadcasting world. He’s called more than 300 Cardinals’ games in Spanish for their radio network, and while he’s leaving that role behind now for this expanded Telemundo job, he will continue as the Cardinals’ manager of international business (a role he’s held for the last 15 years). He’s also been a regular face on Spanish-language NFL TV coverage for both Telemundo and other networks. Now he’s amping up his work with Telemundo, and he spoke to AA about that this week.  He said he’s thrilled to get the chance to work regularly on the Sunday Night Football broadcasts.

“I’ve been with Telemundo off and on for a while now, doing freelance work for the NFL content, primarily with special games and playoff coverage. Now we have this awesome deal with the NFL, a 13-years-long commitment on both sides. And the NFL Sunday night broadcast for me, is something that you just see, once in a lifetime, you’re going to be able to see these games on Spanish TV. So to me, it was a no-brainer.”

Cantú said this Sunday Night Football role is a top opportunity for him.

“It’s something that’s truly a blessing, and in a way, still pioneering for the market. …I’ve been calling games with the Cardinals for a while now, going into my 15th season, and when you’re part of the NFL and part of a franchise calling Spanish radio games, you know that the top of the industry is Spanish TV and the Sunday night broadcasts will be the top. We had a great Super Bowl call last year…it was kind of the tone-setter in the market. And becoming part of what’s already been established here, the best sports including now the NFL, it matters a lot in regards to the next step in my career.”

He said it’s the culmination of his unconventional path to this point.

“I grew up on the Texas-Mexico border, and even though we had a 5A high school team, we didn’t really get scouts down there on a regular basis. Now that’s changed, and there’s great talent down there. But in my time, back in 1999 when I graduated, there was not really a road map on how to get to college from the Rio Grande Valley. …So my natural step in pursuing my education was going back to Monterrey and taking a football scholarship at Tec de Monterrey, which has great sports. So for me, it was okay: this is how I get a free education, this is how I move forward in life, and I was able to be a part of Monterrey [football] for four years as a starter. And to then have a shot to play further than my college career in NFL Europe was simply just a blessing.”

Cantú said he had a lot of uncertainty heading into his time in NFL Europe, as it was a big step  up from the level of Mexican college football at that time.

“With regards to the way we played in Mexico, compared to Europe, it was like ‘Can we actually do that job? Can a Mexican offensive lineman prepare himself and focus at NFL Europe’s commitment, and do that job?’ …Going to Mexico for the full ride at Tec de Monterrey, and then crossing over to Europe, the last minor league of the NFL back then, it was a big jump. But obviously I did the correct thing, and with Monterrey being my home town, it was an obvious thing for me to take that full ride.”

And he said his background in Mexican college football and in NFL Europe has been tremendously helpful for him as a Spanish-language broadcaster.

“The great part is because I studied in Spanish and English in Mexico, and obviously playing football in Mexico, there’s a degree of using the Spanish language. That merger there for me was a natural ability to kind of live in both worlds. I spoke English in high school and growing up in the Texas school system, and then it was kind of putting it all together when I reached college.”

“For me, speaking both languages was huge. In Mexico, we coach in kind of a Spanglish, as all the football terminology for some reason sometimes gets translated to something where only football players can get the drift of it. And, for me, being in Mexico and experiencing the college system there and then moving over to Europe and then the NFL, that experience comes out on the Sunday night broadcasts. We call the games in Spanish, but yes, sometimes there’s terminology that we can’t really translate, so we call it the way it is [in English].”

“That has pretty much set me up to where I am at this point. I’ve been a long-time broadcaster for Spanish radio, calling over 300 games, I’ve done the Super Bowl coverage for many different networks, and I’ve called Super Bowls in the past. But now, being part of this Sunday night dream team, from producers all the way through our talent, these are a great group of guys to work with, which I have done for many years. And now we’re putting a solid crew together moving forward and trying to live up to what we did on Super Bowl LVI in terms of numbers. I think that was a starting point for us.”

Cantú said this week’s draft coverage is also an indication of how much Telemundo is stepping up their NFL focus, especially with their team covering it on location.

“We’re doing it on location, and for me, it’s a dream come true, because I’ve never covered the NFL Draft in this manner, doing it on location with my crew from Telemundo, doing it the way we’re used to seeing on TV on the English side. That’s a great commitment from our end, and it’s exciting to live that as an analyst.”

And he said he can’t wait to get rolling with Sunday Night Football this fall.

“A huge milestone in the U.S. for U.S. content is jumping on Sunday Night Football broadcasts. For me, it’s the next step in my career, and I’m so excited to be part of this great team.”