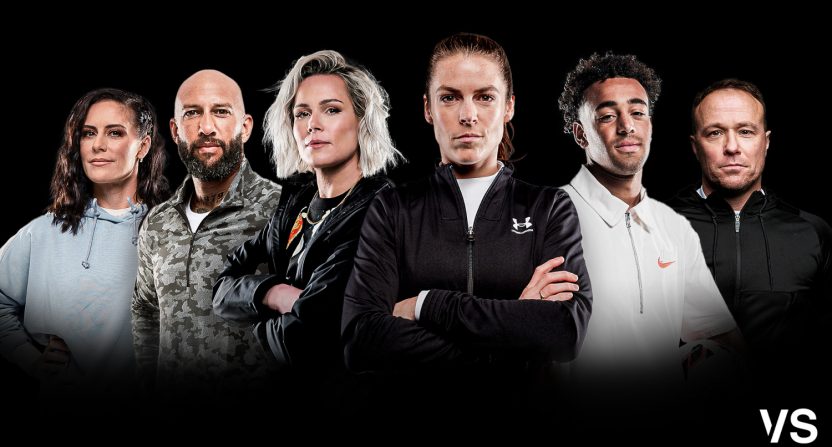 Earlier this year, we wrote about new sports edtech platform VS through the lens of Adam Wainwright’s involvement with it. The platform has the goal of letting athletes and other sports figures pass on their knowledge to a wide group of people, both through classes and through individual exchanges powered by conversational AI (which lets users ask questions and matches athletes’ responses to those). The platform started with baseball figures (it was founded by current St. Louis Cardinals’ manager Oliver Marmol, with input and help from former Cardinals’ manager Mike Shildt) and fastpitch softball figures, but it’s quickly expanding, and the latest latest expansion is into soccer.

This week, VS launched a soccer vertical, diving into that sport ahead of the 2022 FIFA World Cup (which begins in Qatar on Nov. 20). Their new vertical is starting with six people, including Leeds United/U.S. men’s national team midfielder Tyler Adams, former USMNT/Manchester United/Everton/Colorado Rapids keeper (and current NBC analyst) Tim Howard, U.S. women’s national team stars Kelley O’Hara (also with the NWSL’s Washington Spirit), Ashlyn Harris and Ali Krieger (both also with the NWSL’s NY/NJ Gotham FC), and famed trainer David Copeland-Smith of Beast Mode Soccer. VS CEO Eric Frye told AA in a recent interview that soccer was a next logical step for them given its global popularity, and the upcoming World Cup made for a great time to launch this.

“When we think about sports verticals, internationally, when you look at the global sport of soccer, it’s one of the largest or the largest in the mix,” Frye said. “For us, we believe that serving in the 50 states and then expanding that internationally longer-term is going to be an important play for us. We certainly believe that not unlike any other sport we’ll enter, providing one-of-a-kind access to the world’s best players and coaches, we’ll offer tremendous value.”

“We also believe that there could be a very unique fan experience around our conversational AI. We went over to London and produced Tyler Adams there a couple weeks ago to really prepare for the World Cup and really give fans an opportunity to do something they’ve never been able to do before, which is engage with someone like Tyler Adams in a conversational AI format.”

An interesting part of the approach so far is featuring the three women’s stars (plus Copeland-Smith, who’s known for his work training many USWNT figures, including Alex Morgan, Rachel Daly, and Kristie Mewis) at launch in addition to current men’s player Adams and former men’s player Howard. Frye said they’re committed to working with both top male and female athletes, as also seen in their launch of a fastpitch softball vertical at the same time as the baseball one. He said that’s important not for just featuring those athletes, but for featuring athletes that younger athletes can relate to.

“Not unlike with fastpitch softball, our platform is heavily devoted to equality in sport, to making sure that female leadership is prominent, that we’re investing and demonstrating that investment with real dollars and real actions. They’ve accomplished a tremendous amount on the field. And we felt like it was worthy of featuring them on our site and continuing to invest in young ladies, young women, and their journey, not just from a skills perspective but from a mental health perspective and a mindset and leadership perspective.”

Here’s an overall trailer for the launch:

While soccer is a globally-popular game, the initial lineup here is focused on American soccer figures. Frye said it made sense for them to start that way and see how it goes, especially given their wider U.S. strategy to date, but they plan on further expansion down the road.

“For us, there’s a combination of things. One is the economics, making sure we’re good stewards of this early journey to get this off the ground. But while we’ve focused on American players, we have captured several that are in key leagues across Europe.”

And he said the people they’ve worked with so far have been fantastic.

“Every athlete and expert we’ve produced so far, they’ve exceeded our expectations. You think about Kelley O’Hara and what she brings to the table: she’s so passionate, and that’s what stands out about her, the passion to teach. And you think about a figure like Tim Howard that’s accomplished a tremendous amount, he really brought a lot of leadership to the table, so that was exciting. ”

“A guy like David Copeland-Smith flies under the radar with Beast Mode Soccer, but has had a hand in training many of the female Olympians on the national team, and what an unbelievable teacher he is. We certainly spend a lot of time vetting our experts and taking them through both quantitative and qualitative assessment before they are featured on our platform, and everyone of these experts and athletes in their own way brought a lot to the table.”

Here’s a trailer focused on O’Hara:

Frye said while the launch here is timed to the World Cup, he thinks a lot of the content from these figures will be relevant for years to come.

“The content will be focused on a combination of the skills journey, the mindset journey. Most of it will be built around these individual experts, mavens, athletes. …It’s about one-to-one conversations with these athletes.”

[Photo supplied by VS]